The Daily Nexus
News
Students Feel Stressed as UCSB Returns to In-Person Instruction During Midterm Season
February 4, 2022 at 9:30 am by Atmika Iyer and Holly Rusch

All University of California campuses — with the exception of UC Merced — returned to full in-person instruction on Jan. 31. For the UC schools on the quarter system, including UC Santa Barbara, the return to in-person learning occurred in Week 5 — the beginning of midterm season. 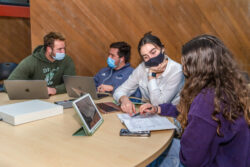 Students on campus voiced that the combined stressors of returning in person and handling midterms have been difficult and wished that the UCSB administration would have planned the return to campus in a way that didn’t conflict with midterms.

“Usually, students tend to be very social in the first few weeks before midterms and then start to really focus on their academics, but now both of those interests will have to collide,” Swamy said in a statement to the Nexus. “It’s also tough for those moving in now because they have to sacrifice time for planning and embarking on their commute, time which they would’ve preferred to use studying.”

Swamy said that though the return has been “interesting,” he is happy to be back in person and remains conscious of the spread of the omicron variant.

Alex Carlin, a second-year pre-biology major, said that going from online learning to in-person instruction during midterms week doesn’t provide a healthy atmosphere to re-acclimate oneself to in-person campus life.

“The abrupt decision to resume in-person instruction during the turmoil of midterms week does not give students the time to properly adjust or even much time to receive needed support from professors,” Carlin said.

Carlin added that the transition from asynchronous classes to rigorous midterms created a lot of “worry and doubt among students.”

“Overall, I feel that the abrupt switch to in-person instruction during midterms week was not the best decision, as it created a substantial amount of worry and doubt among students as they attempt to gather all of the information learned asynchronously and spit it out within the same week they return to their living situations and to campus,” Carlin said.

Fourth-year environmental studies major Maria Sutherland said that many students also had to redo their schedules because they worked off campus. Sutherland said that she was initially worried about juggling classes with work but ended up having professors who maintained a hybrid or remote format.

Regardless, Sutherland said that the collision of the return to in person and midterm season led to a rough transition.

“I do think having us go back to in person right during midterms isn’t the most conducive to a smooth transition,” Sutherland said.

Sutherland added that midterms are not the only obstacle for students as they return to campus and sympathized with the university, saying that it’s hard to ensure that nobody is left behind.

“I think the transition back to in person is difficult and probably always would have been difficult. Midterm season — it’s just hard for everyone. Even just the inherent difficulties of having students that are immunocompromised and the housing situation,” Sutherland said. “And also students who are working, I think, just the whole scheduling aspect of it is really difficult and it’s hard to not, you know, leave people behind, and I kind of wish there was a better way to go about it.”

Stressed? Haha. They were going nuts partying all weekend. I thought they were supposed to be studying.

sink or swim young ones – life is hard