The Daily Nexus
The Daily Stench
$580k Not Enough: Generous Students Start GoFundMe for Needy Yang
January 27, 2022 at 4:20 am by Sam Franzini 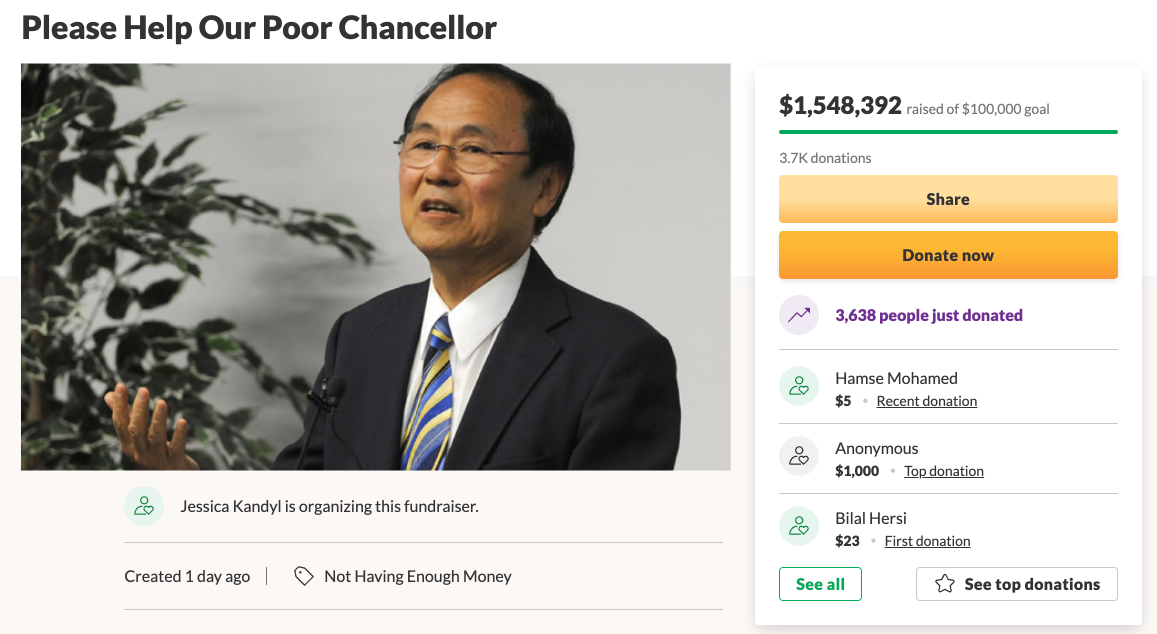 Af ter the recent announcement that Chancellor Yang’s salary would be raised by $125,000 to a measly $580,000 per year, students were left wondering if that’s enough for Yang to get by. A group of students known as the Yang Welfare Collective (YWC) have banded together to start a GoFundMe for the impoverished chancellor, and donations are already flowing in.

“I mean, he works so hard coming up with solutions for us to have less money and less access to campus resources,” local Good Samaritan Jessica Kandyl said while sobbing into her handkerchief. “Starting the GoFundMe is the least I could do.” As of right now, the pool has collected over $1.5 million in donations from students and their parents, making the GoFundMe the most popular page on the site.

Yang’s harrowing story not only brings to light how impossible it is to survive on a half-a-million-dollar salary in this climate. Recently, he purchased a vacation home in Hawaii to get away from the “negativity” he’s surrounded by at UCSB, brought on by all the “annoying poorsies that keep nagging me,” he said. His first choice for a tropical getaway — Fiji — was too expensive, so he instead opted for the paltry beaches of Hawaii. Not only that, but the destitute chancellor lamented that the first-class tickets he wanted to purchase had sold out too quickly.

“I decided to drop out of school next year and instead donate the money to someone who really needs it, Yang,” second-year David Newman said. “I had to break the news to my mom that I couldn’t help her out this year, but she understood. ‘Go help out that amazing chancellor of yours,’ she told me. ‘My prosthetic legs can wait. That man needs help now.’”

The penniless chancellor is also paying for a personal home gym to be added to his current home since he’s tired of not being able to access the UCSB Rec Cen before 11 a.m. However, he’s having trouble accessing a full collection of weights, cardio equipment, a sauna, a steam room, a bowling alley and an ice skating rink due to issues with the global supply chain. On top of that, his butler accidentally supplemented the jacuzzi with chlorine instead of bromine, which would take weeks to clear out. “Chlorine could make me itchy,” Yang lamented. “It’s really a wonder how I wake up every day with hope in my heart that this might be the day everything turns around.”

As empaths, Yang’s story of trials and tribulations is excruciatingly hard to hear, but we’re thankful that the customers of UCSB support their chancellor after everything else he’s done.

Sam Franzini would like to know what the hell is going on.