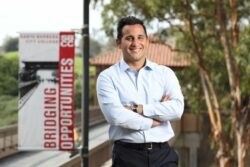 According to a press release from Abboud, he is strongly considering running for second district supervisor once Hart’s current term ends. Abboud cited his experience in working with the Santa Barbara County Board of Supervisors and community encouragement in his decision to explore a different role in public service.

“Since Gregg made his announcement that he will not be running for re-election, I have been encouraged by many community leaders to run for the 2nd District Supervisor’s seat, my home for over 11 years,” Abboud said.

“Nearly every day since 2017 I’ve worked with the County Board of Supervisors and navigated county departments to deliver high quality public services to county residents as a local government executive, since 2012 I did the same as a community leader,” Abboud continued. “This knowledge and experience will be invaluable [in] serving in the role of County Supervisor.”

Abboud said that as a county supervisor, he would prioritize addressing the rising costs of housing and childcare, providing housing for community members experiencing houselessness, addressing the local impacts of climate change and improving natural disaster mitigation efforts.

“With the recently completed redistricting this District now includes both Santa Barbara City College and the University of California Santa Barbara, I am prepared to use my extensive experience working with both institutions, as a local government executive and college board member, for the benefit of all county residents on day one,” Abboud wrote in the press release.

This guy is thinking of running for District Supervisor but has the writing skills of a high schooler. Our education system really is terrible.