The Isla Vista Food Cooperative hosted a “Co-op History Coffee Hour” on Jan. 12, where attendees met with the original owners of the co-op and community activists. The event also featured a book signing for the second edition of Carmen Lodise’s book, “Isla Vista: a Citizen’s History,” which tells the story of how residents rose in rebellion to build a community in the early ‘70s. 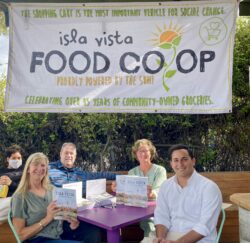 The book signing took place at the co-op’s outdoor patio, with contributors to the second edition speaking at the event. Melea Maglalang / Daily Nexus

Lodise, an original co-op owner and Isla Vista activist, first published the book in 2008 to document the early development of Isla Vista through news clippings, photographs and first-hand accounts of historical events such as the burning of the Bank of America in 1970.

The book signing took place at the co-op’s outdoor patio, with contributors to the second edition speaking at the event.

Jonathan Abboud, IVCSD general manager, wrote the chapter, “Building Our Isla Vista: A Self-Governance Story,” on the development of the community services district from his perspective and spoke about his experience as an I.V. community leader at the book signing.

“It’s been a full ride that I couldn’t have imagined going this way,” Abboud said. “I wasn’t even planning to ever be general manager when I wanted to help the CSD be created, but it’s been a great experience.”

Abboud co-founded the IVCSD in 2014 while serving as Associated Students President at UCSB and has worked for the community services district since its formation.

“I’ve only lived here for 12 years, and I don’t know much else to say, but I really believe in the self-governance movement,” Abboud said. “I decided to stay here and work on the CSD. That’s actually why I stayed here after I graduated.”

Given I.V.’s status as an unincorporated community, the establishment of IVCSD marked an opportunity for residents to have local government representation.

During her chapter in the book, Miller captured the program’s history working with children and families within the community and representing I.V. throughout the surrounding counties.

“When I started at the youth projects, what I saw as a person … is that Isla Vista is often represented in a very negative way,” Miller said at the event. “They would focus on just the worst, most negative part, and they missed out on, to me, the beauty of Isla Vista — which has always been the community. For me, [we were] working really hard with the other entities in Isla Vista to show that there are good things happening in Isla Vista, and that is a vibrant, diverse community that has a lot to offer.”

According to Miller, many of her efforts while working with IVYP consisted of attending meetings with other counties to ensure that Isla Vista had a voice within the broader state-wide community.

“[IVYP] did everything from working with infants all the way up to elementary school and with families as well and really worked hard to make the youth projects a member of the broader community that Isla Vista has,” Miller said. “So I was proud of our work to keep the roots of Isla Vista Youth Projects in I.V. but expand it to something bigger, so that people would take notice and appreciate I.V.”

Miller said she has hopes for the future of I.V.’s growing community, believing in the efforts of organizations like the IVCSD to continue working towards positive change and providing a voice for the town.

“To me, [Isla Vista] was and still is a very vivacious community, and it always gives me hope for the future because of all the new and fresh ideas and the optimism that comes from living in a college town.”

Jeff Walsh, former general manager of the co-op, wrote a chapter about the history of the grocer. Walsh first joined the co-op in 1982 as a cashier and steadily climbed the ladder over the 10 years he spent there, becoming the first assistant grocery manager, then the department manager and finally the bookkeeper before his promotion to general manager.

Walsh said that while he didn’t have all the first-hand knowledge of the co-op’s development, he relied on three principal sources to create a comprehensive history: one of the first original general managers, the grocery manager when he first began work at the co-op and one of the more recent general managers.

“I tried to write [about] the co-op from beginning to end from before it existed — when it was just a buying club,” Walsh said. “If you look at the book, you can even see when it was formed, what happened, and then when it really took off and bought the building a few years ago — all the things that have happened.”

Though he no longer lives in Isla Vista, Walsh said he still enjoys visiting the co-op and supporting the community whenever he finds himself in town, believing in the positive changes the community is creating.

“People living here are participating in the community, are making stuff happen and are trying to make change in positive ways, and I’m still heartened, and I still come here. Whenever I come to town, I come to the co-op and always try to buy something, even if it’s just a bottle of juice,” Walsh said.

“When I first moved here, it was the first time I was ever exposed to and became involved in and participated in a community, and I’ve found that people working together for common goals was powerful,” he continued. “Even though we didn’t always succeed and reach those goals, the camaraderie that was built and the love that we found was beautiful.”