Students, faculty, alumni and community members fastened their shoelaces and flocked to the starting line of UC Santa Barbara’s 44th Annual Turkey Trot on Nov. 20. More than 200 participants walked, jogged and ran through courses that snaked along and through the UCSB Lagoon, Del Playa Drive and the Devereux Lagoon. 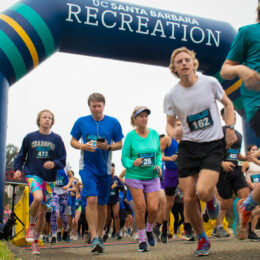 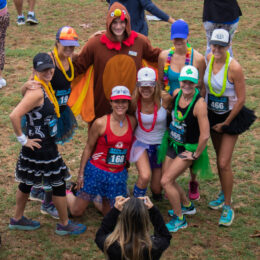 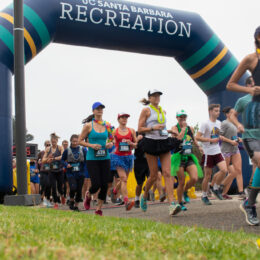 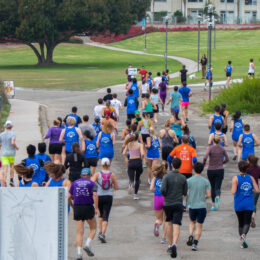 Ashley Marsh, event organizer and assistant director for events and scheduling at the UCSB Department of Recreation, said that the Turkey Trot provides a fun opportunity for community building around the holidays and encourages exercise.

“It’s the spirit of, right before Thanksgiving, getting the community together to do something healthy, get their body moving, before most people eat quite a bit of food,” Marsh said.

Participants entered either the 5 kilometers (5K) or 10 kilometers (10K) races under the men’s, women’s or open divisions, the last of which anyone could join regardless of gender identity. Across these distance categories and divisions, they all took part in the Turkey Trot for a myriad of reasons.

“I’m here to run the 10K with the UCSB Running Club, which is my old club,” UCSB alumnus Scott Chow said.

“I will be hauling ass,” Martinez said. “I’ll be trying to get my best run time ever for a 5K.”

Similarly, Stephanie Malia Hom, assistant professor of transnational Italian studies at UCSB, wanted to run the 5K to keep a promise she made to herself.

“At the beginning of the school year, I started running and set a goal for myself to do a turkey trot this year,” Hom said. “[I] saw that UCSB was offering one, [the] most beautiful place to be running for a turkey trot, and decided to sign up.”

Some participants expressed their eagerness to return to an annual favorite following the easing of pandemic restrictions.

“I’ve been doing this race since the ’80s,” said Bill Rupp, an Isla Vista resident who ran the 5K. “I [haven’t] raced since the pandemic started.”

Others were just there for a good time.

“I love to run,” said Graci Novack, a second-year pre-biology major who ran the 5K. “I have never run a race before, and it’s always been on my bucket list.”

For Eric and Cassandra Durtschi and their four children, who all jogged the 5K, it was about reigniting a family tradition.

“We had a tradition since these guys were babies, and we would push them in strollers, we would do a turkey trot,” Eric Durtschi said. “It’s been a couple of years since we’ve been able to do one, but we found out about this, and we’re excited to come out and have fun as a family.”

Attendees checked in on the lawn behind the University Center in the crisp, cloudy early morning. Tables were spread out on the grass for them to drop off their belongings, grab snacks and spin a prize wheel if they followed the UCSB Department of Recreation on social media.

Eden Hale, a fourth-year global studies major, a student manager at the Department of Recreation and the M.C. of the event, cracked turkey-related jokes and puns through the loudspeakers in between music.

Each participant in the Turkey Trot received an event shirt from Isla Vista Screen Printing & Embroidery and a race bib from RaceFox to attach to their clothing. Each bib contained a timing chip that would record each person’s time on the course down to the millisecond, Marsh said.

“If anyone is crossing that finish line pretty much at the same time, it gives a pretty accurate result,” she said.

Prices this year were slightly higher than those of previous Turkey Trots due to an increase in the local minimum wage and higher costs from switching to RaceFox timing equipment, according to Marsh.

“We don’t make money on this race,” she said. “We’re lucky if we break even.”

Participants warmed up with stretches on the lawn and gathered at the starting line for their respective races. After a countdown and the sounding of an airhorn, they were off. At some junctions, the department marked the courses with signs and staff to demarcate the Turkey Trot path to participants.

For a source of motivation and humor, Blaine Lundt, a third-year communication and global studies double major and Department of Recreation project manager, ran the 5K in a turkey onesie.

“I’ll be running part of the 5K, going probably as far as the Campus Point portion, cheering people on,” Lundt said. “I’ll even do like a turkey call and just drum up energy. Probably wake up the course monitors, too, a little bit.”

The event took place over three hours. The first one through the finish line, of the 211 participants, was third-year ecology major Steven Scruggs, who placed first in the 5K men’s division.

“[I’m] feeling good right now,” Scruggs said in between breaths. “I’ve been training for a month. I’ve just been conditioning. I run 4 to 5 miles a day.”

The event organizers acknowledged 18 winners in total, three per course and division. Winners received items such as Department of Recreation-branded merchandise, a group fitness pass to the Recreation Center and gift cards and certificates to Woodstock’s Pizza, Mesa Burger and Blenders In The Grass. Due to the electronic bibs, results were logged in real time on RaceFox’s website as runners and walkers crossed the finish line.

Marsh said that no prototypical winner exists for the Turkey Trot, and rather, participants can and should approach the race with whatever suits their personal strategy.

“Whether you’re walking it and taking your time and you’ve got your dog next to you, or you’re pushing a stroller with a baby or you are trying to get the fastest pace, you can win the race,” Marsh said.

The event ran relatively smoothly, aside from some confusion regarding the pathways for the race. Scruggs, the official first-place winner of the 5K, believed that the title belonged to someone else: Spencer Hutchinson, a first-year graduate student in electrical and computer engineering.

“I guess I was in the lead,” Hutchinson said. “And then, with 100 meters left, I took a wrong turn and did an extra lap.”

Marsh said she hopes to resolve issues around the confusing signage for future events.

“We know it’s always somewhat confusing,” Marsh said. “So we tried to make the map a little more clear and signage on the course — we’ll definitely take it into consideration.”

“One of the reasons the course is set up this way is because it’s the safest way we can get a 5K course in,” she continued. “We don’t go down and around Campus Point because we don’t want runners running down the stairs. We don’t want to put runners across the streets.”

Nevertheless, many attendees considered the Turkey Trot a success.

“You get out here and you create a really fun memory for your family.” Cassandra Durtschi said. “When you think about getting out and exercising and things, you just get excited because you’ve been doing it since [you were] little.