The University of California agreed to officially recognize Student Researchers United — a union representing over 17,000 student researchers across the UC — on Dec. 8. 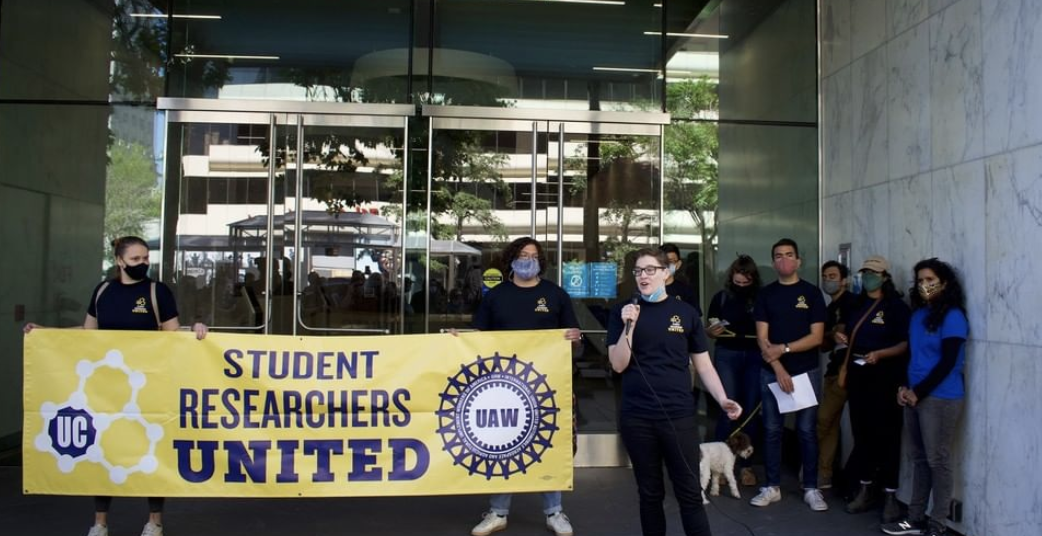 The SRU-UAW website states that the union will work to secure fair workplace rights and conditions, improving equity and ensuring timely and correct pay with an enforceable contract. Photo Courtesy of Student Researchers United

The acknowledgement comes after a bevy of legislative backing for the union, including 49 members of the California State Assembly and 30 members of California’s congressional delegation.

The decision also comes two weeks after Student Researchers United-United Auto Workers (SRU-UAW) voted with a 97% majority to authorize a strike, should the university continue to refuse to acknowledge their union.

UC Office of the President Spokesperson Ryan King originally said that the UC has no objection to recognizing SRU-UAW as a bargaining unit but took issue with the inclusion of student researchers who have no employment relationship with the university — such as those who receive academic credit for their research.

Now, the “UC formally agrees to recognize trainees and fellows as employees, thus acknowledging their right to unionize and their inclusion in the SRU-UAW bargaining unit,” Greg Ottino, an SRU-UAW organizer and UC Berkeley graduate student, said in the union’s official statement on the acknowledgement.

King said in a statement to The Daily Californian that while the recognition agreement defines who is a graduate student employee, the union and the university will resolve further conflicts around the definition as they arise.

“Now that the university has given up its delay tactics, we can begin the real work of bargaining a strong contract to improve the conditions for student researchers in the UC system,” Kevin Smith, an organizer with SRU-UAW and UCSB graduate student, said in an email to the Nexus.

“This is a tremendous achievement, which was made possible by thousands of student researchers across the state who collected authorization cards, coordinated rallies, and organized a successful strike authorization vote,” his statement continued.

The SRU-UAW website states that the union will work to secure fair workplace rights and conditions, improving equity and ensuring timely and correct pay with an enforceable contract.

“SRU-UAW is notable for several reasons: it represents the largest new bargaining unit of 2021, it is the largest unit of student employees in U.S. history, and it was organized during the pandemic, when traditional means of organizing were shut down,” Ray Curry, president of the UAW, said in a Dec. 9 SRU-UAW email.

“It took an enormous amount of courage and grit for these workers to make this happen, and we are thrilled to welcome them and support them as they move forward.”

Kudos to the graduate students and researchers who fought and won well-deserved union recognition. This union local can exercise tremendous power, not just over wages and working conditions but over the direction of UC military-related research that funnels graduate students into projects (Institute for Collaborative Biotechnologies, etc.) for chemical amplification of soldiers for future battlefields and radar absorbent fighter jets to avoid detection. Our brilliant UC researchers must not be party to an escalation of the arms race. They and we, society as a whole, deserve so much better. CODEPINK.org/UCSB

As a 1977-79 UCSB student, ‘81 Cal grad, and grad student and faculty union organizer in Colorado and Philadelphia (where we too won!), congratulations to our sister and brother Gauchos on your union success. Here’s hoping you’ll leverage your new-found power for campus, state, national and global good. UCSB must always be on the side of peace and social justice! Solidarity forever!

As a veteran union-side labor lawyer, let me extend congratulations to the student researchers, who now can collectively voice their workplace concerns, bargain to improve their working conditions, and achieve protection against the whims and caprices of management.

Right on! You are an inspiration. Use your power for yourselves, for your fellow workers, and for the country. Next step: no more research or contacts with the war machine.

As a taxpayer and SB community member, I congratulate the UC graduate students on gaining union recognition and urge them to leverage their power to demand UC stop chasing military contracts with the Pentagon and war profiteers.

Congratulations on this important accomplishment. Please use your power and intellectual resources to decline work on weapons of war and destruction.

I congratulate you on your important victory. I hope you can use your union power to turn UC away from military collaboration and towards projects that sustain life.

Congratulations on this wonderful and significant victory for you collectively, one that can benefit workers everywhere. I am a retired union member, a UC Berkeley graduate, and an anti-war Viet Nam veteran. In addition to fighting for the interests of your members, you are in a position to give leadership to exercising a power workers in the US have rarely used – the power to have a big say about what does and doesn’t get produced. This is a crucial thing for unions to exercise as the planet faces the climate crisis. Given the UC system’s despicable involvement in militarism,… Read more »

I congratulate UCSB grad students and researchers who fought for union status. Keep up that fight for moral, legal, and ethical research. You can serve your country and mankind without falling into the quagmire of war and human rights abuses. Be the leaders that we so desperately need.

As a 1977-79 UCSB student, ‘81 Cal grad, and grad student and faculty union organizer in Colorado and Philadelphia (where we too won!), congratulations to our sister and brother Gauchos on your union success. Here’s hoping you’ll leverage your new-found power for campus, state, national and global good. UCSB must always be on the side of peace and social justice! Solidarity forever!