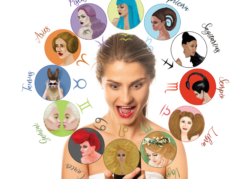 In what is surely a cosmic turn of events, an alignment of the stars, a blessing from above, second-year Hailey Bailey’s daily horoscope was close enough for her to continue believing in astrology.

“I was just scrolling through Instagram when it caught my eye: A pastel-colored list of the signs and what would lie ahead of them that day,” Bailey explained. After she swiped to the Sagittarius page, she started reading her daily plan, which was laid out for her. “It said that a friend would make an appearance, I’d have some good news come my way and that I’d come to a shocking realization.”

And the events that lead her to fling herself head-first into the star-gazing pseudoscience? “First,” Bailey said, counting on her fingers, “I kept scrolling on Instagram. And you know what? I kept seeing my friends! Like, ALL over my feed. It was like they were posting for me or something.” When asked if this day’s feed full of acquaintances was any different from any other’s, she countered, “You don’t get it. It SAID it would happen today. And it did.”

Afterwards, Bailey received her good news. “My parents called and told me that our family cat, who was like a billion years old, just died.” But, Bailey pressed, this was actually a blessing in disguise. “Now that he’s gone, we can get a little kitty that will be so much cuter! Since I basically predicted this happening, I told them I wanted to name her Amanda.” Getting ready, she put on Megan Thee Stallion’s 2020 album “Good News.” “Then I was like, wow,” Bailey said, eyes wide open in disbelief. “The good news literally came to me, in music form. I thought, ‘This is getting wild.’”

And then, the shocking realization. “Horoscoscopy [sic] is my passion,” Bailey explained, undoubtedly passionately. “This day has gone exactly how @astroqueenie on Instagram had set out for me. It’s like I’m traveling on a pre-ordained path through life.” Bailey’s plans after her truly not-coincidence-filled day include dropping out, immediately ignoring the concept of free will, and moving to Sedona, Arizona, to go look at some crystals.

“Under the powers that be, I’ll know exactly how my days will be going.” What’s in the big picture for Bailey? “Who knows where my newfound spiritual awakening will guide me. Maybe I’ll write a book. Maybe I’ll run for president. If @astroqueenie predicts it, anything is possible.”

Sam Franzini reluctantly believes in astrology because he is a neat-freak perfectionist Virgo.