The Daily Nexus
Nexustentialism
It's satire, stupid.
Keg N Bottle Patron Revealed To Be Three Freshmen in a Trench Coat
December 2, 2021 at 4:20 am by varun iyer 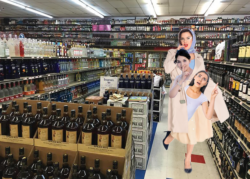 Disclaimer: This is a real news story, and any similarity or relationship to fictional persons, monsters, fairies and deities living or dead is a mere coincidence.

ISLA VISTA, CALIFORNIA — Late last Friday night, CSO Detective Etienne ‘Ets’ Craiyonne apprehended three of the most heinous criminals of the 2021-22 school year: McKayla Enany, Mikayla Strong and Macailagh Connor (also referred to as M&M&M). The three have been charged with: misdemeanor for improper use of a trench coat, federal felony fraud charges under RICO, and MIPs.

The plan had all the makings of a Hollywood heist movie: A dedicated team, months of planning and a shadowy sponsor with deep pockets.

The team: M&M&M were a carefully selected group of freshmen, each with unique talents. They share a triple in San Nicolas despite all requesting doubles, and they all slightly resent each other because of it.

The plan: Three critical steps, each more complex than the last.

The sponsor: Some guy from across the hall’s grandfather had just died, so he had received a few thousand dollars “for tuition.” He promised to pay double the price for any purchased alcohol and bankrolled investments in training, disguise and snacks.

The execution: According to Macailagh, the plan began without a hitch — as all plans do. In their disguise, they made their way from the park across the liquor store and hobbled across the street, thanks to the grace and braking abilities of two different oncoming cars. They entered K&B, grabbed a handle of peach New Am and a White Claw sampler pack and headed for checkout. The cashier, observing that the mysterious patron in the trench coat was clearly of age and privacy-mindful, decided not to ask for ID. So far, so good.

The mistake: The crucial moment came as the trio attempted to exit the store, where Mikayla (described in unprintable language by her fellow conspirators) tripped over the threshold, spilling the other two into the street.

The capture: Our intrepid hero, Etienne Craiyonne, happened to be hard at work patrolling the area as they observed the impostors fall apart in the street. Craiyonne immediately observed fraud at play in the situation and informed the group that they were under arrest. After ensuring that the three were in CSO custody, Craiyonne offered them free water bottles and masks, which they politely refused.

The fallout: All three were booked into the I.V. Foot Patrol’s Foot Lock-up for the night before being turned over to federal law enforcement in the morning. They will be tried together on Nov. 31st in the District Court for California’s 69th district. Meanwhile, I.V. liquor store owners are being told to keep an eye out for more hijinks, shenanigans and all-around capers perpetrated by the seemingly innocent fresh faces around campus.