The Daily Nexus
Sports
Successful End of the Season Finish
November 25, 2021 at 3:01 pm by Abigail Monti 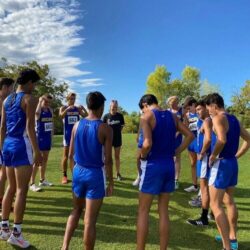 On the men’s side, the Gauchos followed up their Big West Conference title to place 10th overall, making this season one of their best in recent years. The women’s team also competed well, finishing in 27th place.

Leading the men once again was fifth-year Nick Randazzo, who came off his second-place finish at Big West Conference Championships with vengeance. His time of 30:15.6 in the 10K landed him in 20th place overall, and first out of all Big West athletes.

“Nick Randazzo ran a gutsy, tough race,” Coach Shayla Houlihan said. “He lost contact about 4 miles into the 6-mile race but was able to come on strong and reach the top 20 of the race over the last mile of the competition.”

“Unfortunately, it was not enough for him to move on to the national meet. He was the fifth individual not part of a team that qualified for NCAA’s and he needed to be in the top 4 of those individuals.”

Next, across the line for the men’s team was fifth-year Brian Schulz, who finished in 48th place with a time of 30:52.9, followed by sophomore Zachary Parker in 84th place. Big West honored Parker’s performance this season by naming him Big West Freshman of the Year. (All cross country athletes were red-shirted during the 2020-21 season.)

On the women’s side, sophomore Madeline Franco led the Gauchos in the 6K with her 133rd place finish and time of 22:21.7. Right behind her was sophomore Sarah Auther, who crossed the finish line at 22:23.1 and placed 136th.

“The cross country season was very successful overall,” Houlihan said. “There were many teaching moments for these men and women. Many of them had not raced cross country at the college level or had not raced cross country for two years. The young women’s squad got many opportunities to continue to learn what it takes to be at the next level. The men kept getting better and better with each race and capitalized on it by winning their first conference title since 2015.”

With the cross country season officially over, the men’s and women’s teams now turn to train for the upcoming track and field season.

The Gauchos will debut their outdoor season on March 5 of next year, followed by the UCSB Invitational the weekend after. Both teams aim to take home the 2022 Big West Conference Championship title — this track and field season will be one to watch, with the women’s and men’s teams placing third and fourth, respectively, in the conference last year.