The UC Santa Barbara men’s basketball team opened the season 1-1 with a 119-65 home opening victory against the San Francisco State Gators and a 73-65 road loss against the Washington State Cougars. The 119 points in the home opener was the second-most points a team has ever scored in the Thunderdome. The Gauchos were just 4 points away from tying the 123-point record set in 2020 against Bethesda University. 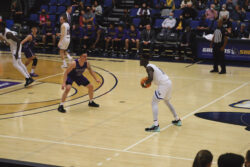 Against San Francisco State, the Gauchos gave the raucous student section something to cheer for all night long. From the start of the first half, the Gauchos established their dominance in the interior. UCSB shot an astute 69.2% when inside the 3-point arc, while their total field goal percentage stood at 58.8%. The Gators’ only lead of the night occurred early in the first period when a bucket put them up by 1. However, a 14-point run by the Gauchos in the middle of the half created some major distance as UCSB entered the locker room at halftime with a 27-point lead. Miles Norris, a senior starting forward for the Gauchos, found himself in some early foul trouble and was not able to play for the majority of the first half.

In the second half, UCSB shot at a higher percentage while hitting 3 more 3-point shots. In addition, the Gators continued their shooting struggles as they saw their deficit expand. The Gators had no answer for UCSB junior guard Josh Pierre-Louis and senior forward Amadou Sow. Both players scored 25 points for the Gauchos, shooting at an efficient 69.2% or higher. Even with the solid shooting, the Gauchos struggled with turnovers as they coughed the ball up 18 times. But despite these ball security issues, UCSB continued to play a fast-paced game.

“I think we have some really unselfish guards that pass the ball ahead,” UCSB Head Coach Joe Pasternack said. “We have to do an even better job of running the floor. I think our guys can be a really good running team. We have a lot of great athletes. [Pierre-Louis] in the open court is spectacular.”

The Gauchos’ momentum did not carry over to their visit to Beasley Coliseum, where they fell to Washington State. The Gauchos came out sluggish as they quickly found themselves down 12 points early in the first half. The Cougars held UCSB to a shooting percentage of just 30.8% in the first half while shooting an effective 52.9%. Turnover struggles continued for the Gauchos as they already totaled 7 at the halfway point of the period. UCSB ended the half on a 9-2 run to cut the lead to under 20 points.

In the second half, the Gauchos made a valiant comeback effort that in the end came up short. The Gauchos only turned the ball over once in the half and had a better shooting percentage than Washington State. Sow, the game’s scoring leader, scored 16 of his 25 points in the second half. Every other Gaucho who took a large volume of shots consistently struggled throughout the game as freshman guard Cole Anderson’s heave at the buzzer put the final score at single digits. The Gauchos will look to put their first defeat of the season behind them as they travel back to the Thunderdome to take on the Chicago State Cougars this Saturday.