Eight former University of California associate vice chancellors, campus architects — a position that gives oversight for planning, designing and construction — sent a letter to UC President Michael V. Drake and the UC Regents on Nov. 17, voicing concerns over and opposition to Munger Hall. 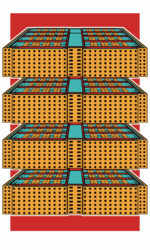 Munger Hall, a dorm designed by billionaire and Berkshire Hathaway vice chairman Charles Munger, has garnered global attention for its lack of natural light and ventilation due to a lack of regular windows — though the building is equipped with several artificial ones.

The eight retired vice chancellors collectively represent 122 years of architectural service to the UC. In addition, the undersigned cited their experience “in the planning, design, and construction of university facilities, including student-life housing, that embodied the many facets of the institution.”

The letter continued to say that as UC architects, they value designs that “heighten the human experience for everyone,” and the result of both the value and work are “ten distinctive campuses with an international reputation for campus design and architectural excellence.”

“Unfortunately, the Munger Hall project fails to meet the high standards that the University has set for itself. At best, this project as currently conceived is a sociological and psychological experiment that has the potential to cause great harm over time to thousands of students,” the letter read.

The letter also addressed the Long Range Development Plan (LRDP) — a contract developed in 2010 stating that the university must cap enrollment at 25,000 until 2025, build more dormitories for the additional 5,000 students the UC mandated that every campus enroll by 2025 and build 1,800 new units for its faculty and staff — as well as the 2010-20 Capital Financial Plan and Physical Design Framework, documents guiding UCSB’s future developments.

The letter said that the design of Munger Hall contradicts several guidelines and requirements from the LRDP.

“Munger Hall fails to meet both the spirit and the details of several essential requirements and guidelines established by those documents,” the letter read.

The letter quoted the LRDP: “The most highly valued asset of the campus is its magnificent natural setting, which should be the focus of campus spaces and their patterns of circulation and use.”

The letter continued to cite the LRDP which directs campus planners to “locate buildings and spaces to take full advantage of the campus extraordinary coastal beauty. Enhance views and increase access to the natural areas from the campus property.” Munger Hall, the letter said, fails to take into consideration the natural surroundings of UCSB — as required  by the LRDP — with its lack of windows.

The letter also took issue with another stipulation in the LRDP, which states that “new structures on the campus shall be in general conformance with the scale and character of surrounding development.” According to the undersigned, the 11-story building does not meet that requirement and would be “more than double the 65-feet height limit for buildings,” as stated in the LRDP. In its current design, Munger Hall would be the tallest building in Santa Barbara County.

“For The Regents to accept a project that so blatantly ignores clearly established development guidelines calls into question the purpose and value of the entire campus planning enterprise,” the letter read.

According to the letter, Munger Hall would not only violate the guidelines and requirements of the LRDP but would also compromise California Building Code standards. Though the UC can bypass typical building department code requirements as “An Authority Having Jurisdiction” that can attain approval for certification of occupancy with “Alternate Means of Compliance,” the undersigned took issue with UC using “workarounds” in the planning process.

“Our understanding is that the building’s lighting and ventilating systems will have to be substantially modified to attempt to achieve any alternate means of compliance rather than meet code requirements regarding natural light and ventilation in sleeping rooms,” the letter stated.

“Furthermore, these code ‘workarounds’ will be highly energy dependent and will be in direct conflict with the UC system’s Carbon Neutrality goal. Finally, considering the current COVID-19 pandemic calls into question the wisdom of residential buildings relying entirely on mechanical ventilation.”

The undersigned also said that Munger Hall would be ​the most expensive residential project in UC history.

“The project’s high cost and its unavoidable effect on student housing rates is also quite troubling. Publicly released information for Munger Hall indicates that the project cost is over $330,000 per bed,” the letter read.

The letter compared the cost per bed of Munger Hall to UCSB’s San Joaquin Villages student apartment complex, which cost $166,830 per bed and translates to $209,445 today.

“Munger Hall’s cost per bed is more than 50% greater than that. The inevitable increase in housing rates will adversely affect the affordability of a University of California education,” the letter read.

The UC architects continued to say that they understood the drives and demands for additional housing at UCSB, but that Munger Hall is not the appropriate response.

“The community pressure is intense, but this social petri dish, so foreign to the character of the Santa Barbara campus, is not the answer,” the letter stated. “If the campus sinks $1.2 billion dollars into this ill-informed attempt to warehouse students, its ability to fund more appropriate student housing in the future will be severely compromised. A failed investment of that size is bound to ripple throughout the University system.”

The undersigned belonged to the American Institute of Architects and concurred with their colleagues who previously spoke with the Nexus: the UC must “step back and embrace the values of a humane environment, one that fosters health, safety, and welfare, instead of one that may forever harm generations of young students … Our students and our campus landscapes all deserve better.”

The letter ended with the retired UC architects citing Munger’s quote, “No two architects ever agree on anything,” which was said in response to criticism of Munger Hall.

“Ironically, Mr. Munger’s proposal for the Santa Barbara campus has demonstrated just the opposite: America’s architectural community is speaking out loudly against it. Please consider our objections and demand that UC Santa Barbara do better.”

Munger needs to take back his millions and let former UC Associate Vice Chancellors and Campus Architects fund it out of their own pockets.

His “millions” are a fraction of the total cost of the proposed monstrosity.

Good grief. I hope he does.

It’s never going to not be funny to me that Munger thinks that his complete lack of skill or experience with architecture is a point in his favor. If some idiot with no training walked in off the street and wanted to perform heart surgery on you, you wouldn’t let him just because he offered to pay for part of the medical bills on the condition that you didn’t get to question how he was going to do it.

A slight clarification to the second paragraph of the Nexus news article: In terms of building, there is really no such thing as an “artificial window.” Those devices, so-called, proposed for installation in the individual student rooms, will be electric light fixtures and they are likely to be left on all day and certainly during daytime when occupied.