After a nearly three-year-long struggle, the University Council-American Federation of Teachers reached a tentative agreement with the University of California to secure a new contract and avert a massive two-day strike. 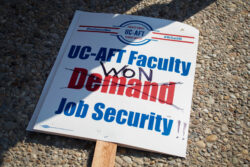 In lieu of a strike, the University Council-American Federation of Teachers (UC-AFT) held rallies of celebration across UC campuses. At UC Santa Barbara, lecturers and supporters gathered under Storke Tower on Nov. 17 to revel in their success and express their relief in having a new contract.

“When we fight, we win,” history lecturer Branden Adams said at the rally.

The new contract, announced early on Wednesday, includes significant improvements to job security, salaries, paid family leave policy and better workload standards, according to the union. Consistent performance reviews and a nearly 30% raise over 5 years are the two cornerstones of the updated contract.

“I’m really glad that my administration finally, after more than two and a half years, saw the light that this is not a corporation where the bottom line matters most but realizes that our core mission is educating students and our lectures are a really key part of our whole enterprise here,” history professor Harold Marcuse said.

The contract raises lecturer compensation by nearly 30% over five years and provides a $1,500 signing bonus. Lecturers teaching classes with over 200 students enrolled or that have heavy writing components will receive additional compensation.

New job security protections will provide lecturers with multi-year appointments and performance reviews at the end of two and three years of teaching.

“There’s now a series of reviews in place and a chance to really end churn [lecturer turnover], which is a hugely destructive process on people’s lives and on students’ lives too,” writing lecturer and union member Christopher Dean said.

The union also secured a fully paid family leave policy of four weeks for all lecturers, which is less than the eight weeks the union originally asked for.

“I think having the chance to be close to your child in your child’s initial stages, we know it’s just super important. So I’m really glad to see that,” political science lecturer Chase Hobbs-Morgan said.

The union held a vote to authorize a strike last week, which passed with an overwhelming 91% of union members voting to strike.

“I woke up this morning early, ready to come participate in the strike that many people here put a lot of work into organizing and was getting ready, hadn’t checked my phone or anything, and my partner yelled from the other room that the strike was off,” Hobbs-Morgan said.

In an internal fact sheet obtained by the Nexus, the union described the two unfair labor practices that it had filed against the UC over which it planned to strike.

The first charge took issue with an update to the parental leave policy, requiring lecturers to work a minimum of 1,250 hours total in order to qualify for paid parental leave at 70% of their salary.

UC-AFT President Mia McIver described the hardship this policy imposed on lecturers, most of whom work part time, as a “drastic loss of essential income,” given the median UC lecturer salary of $19,067, according to the union’s filings with the California Public Employment Relations Board (PERB).

McIver said that the university refused to negotiate the updated parental leave policy, which she claimed violated the Higher Education Employer-Employee Relations Act.

McIver responded to the offer in an email to Associate Director of Labor Relations at the Office of the President Nadine Fishel.

“We [the union] look forward to a discussion of the proposal,” McIver said in the email, requesting to set up a bargaining session to discuss the proposal.

A response email from Fishel indicated the university’s unwillingness to meet for negotiations prior to the signing bonus’ expiration time.

“My cover letter was very clear. We need an answer to our package proposal by close of business today,” Fishel said in the email.

Throughout the day, McIver requested to schedule a bargaining session, but the university refused to meet, insisting on the Oct. 15 deadline, according to emails from McIver acquired by the Nexus.

“UC-AFT considers your refusal to schedule a bargaining session to be a refusal to bargain altogether. We also are not required to respond to a take-it-or-leave-it proposal without any opportunity to ask questions or make a binding on the record counterproposal,” McIver said. “We insist that you respect our bargaining rights … If you do not, we will pursue all options to defend our bargaining rights.”

The union then filed charges of unfair labor practices with PERB and threatened to strike. Since then, the union has held bargaining sessions over various contract proposals as the threat of a strike loomed over the university.

These negotiations continued through Tuesday night, the day before the strike was to occur, with university and union representatives meeting for hours in an attempt to reconcile their differences and find a solution that wouldn’t involve having to strike.

The new contract will take effect June 2022 and still faces a ratification vote from union members within the next two weeks.