The University Council-American Federation of Teachers, a union representing non-tenure-track teachers and librarians across all University of California campuses, will hold a vote this week among its members to determine if they will strike over two alleged unfair labor practices committed by the UC, according to an internal fact sheet obtained by the Nexus. 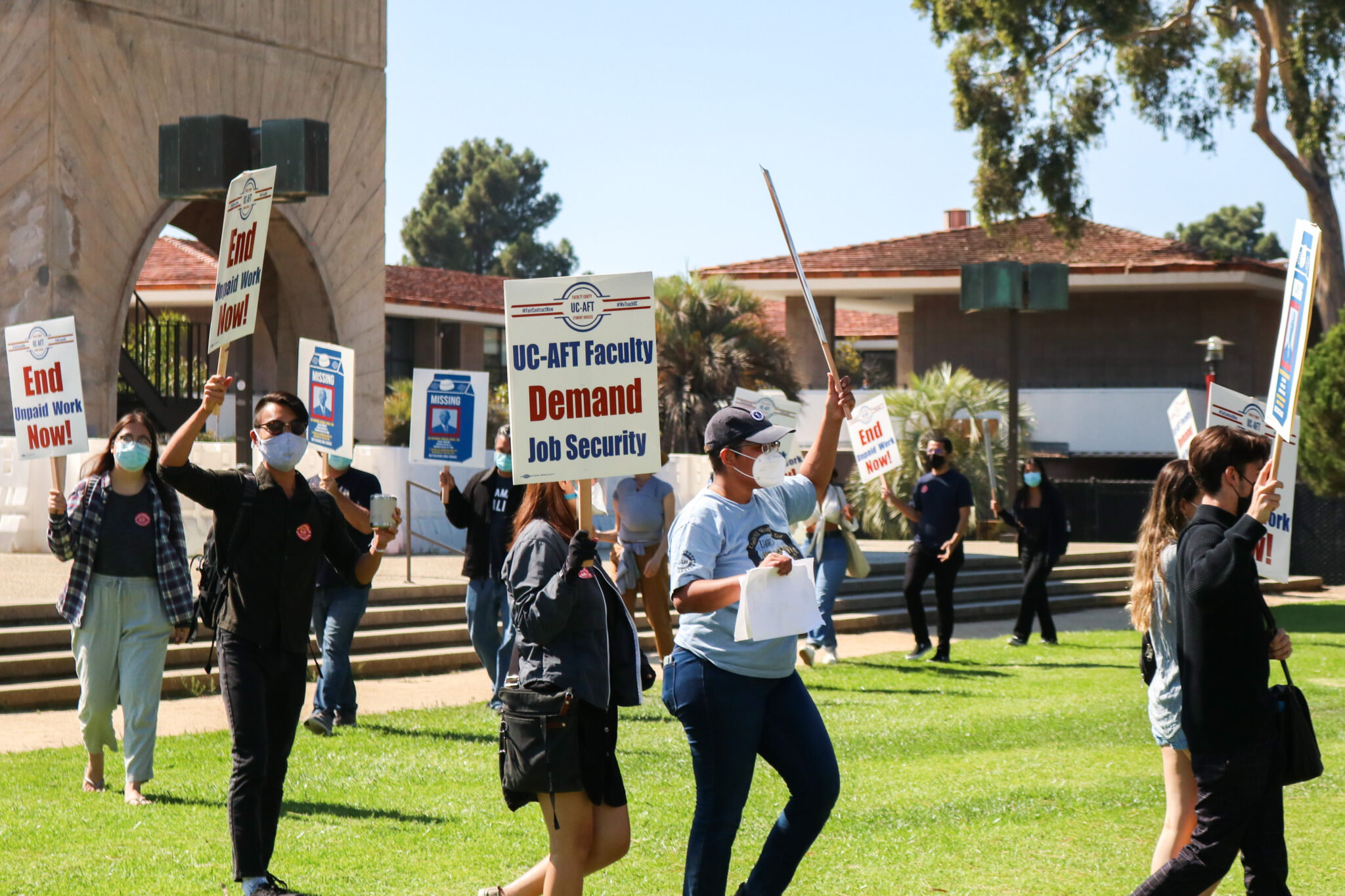 The union has been struggling to renegotiate its contract for nearly three years and held statewide pickets in October to raise awareness for their cause. Mark Alfred/Daily Nexus

The University Council-American Federation of Teachers (UC-AFT) said there are two specific unfair labor practices that the union would strike over: refusal to negotiate over the UC parental leave policy and an unfair time constraint included in a UC contract offer.

Members of the union will have from Wednesday to Saturday to vote if they wish to authorize the strike, with lecturers beginning to cast ballots. The last strike authorization vote held by the union in May 2021 passed with an overwhelming 96% majority in favor of striking.

If this strike vote passes, lecturers across all UC campuses will hold a two-day strike next Wednesday and Thursday. There will be no class or assignments for students enrolled in classes taught by lecturers participating in the strike.

“For UC lecturers, [striking] means no classes, no grading, no meetings, no asynchronous instruction, and no other teaching-related work for the duration of the strike,” read a statement from the union to lecturers.

The first reason for the strike is the UC refusing to bargain over an updated parental leave policy, according to UC-AFT. The union claimed that the updated policy would exclude thousands of lecturers from new benefits. The union requested to bargain with the university over its updated policies, and were specifically told by President Michael Drake’s representatives that the university would not negotiate, according to the union. The union maintains that this is an illegal practice that violated the terms of their current contract.

“In October 2021, UC-AFT filed a ULP charging that Drake’s administration has refused to negotiate in good faith over a new paid family leave program. The eligibility threshold to access the new benefit excludes thousands of lecturers, the majority of whom teach part-time and are more likely to be women and caregivers than their tenure-track colleagues,” read an internal ULP fact sheet shared with union members.

​​The second charge regards the University’s Oct. 11 contract offer. The union has been struggling to renegotiate its contract for nearly three years and held statewide pickets in October to raise awareness for their cause.

Thirty-six hours before the pickets took place, UC management emailed a new contract offer, according to an Oct. 22 bargaining update put out by the union.

The contract had a $500 signing bonus attached for all eligible employees, but only if the union agreed to the offer by 5 p.m. on Oct. 15, after which the bonus would expire. The union alleged that it is an unfair labor practice to have a time-sensitive clause without  time to bargain over the contract. The university refused to meet with the union until this clause had already expired, the union claimed.

The union has alleged several other unfair labor practices against the University of California related to workload and a failure to negotiate over contract issues. Though UC-AFT filed unfair labor practice charges over these issues, they are not legally striking over them.

UC-AFT claimed that as a result of the pandemic, lecturers incurred additional expenses related to work from home and, according to their contract, they were owed financial compensation for these expenses. The union alleges that the university did not provide this compensation and also refused to negotiate the point.

“The university in many cases provided no support, we had demanded to negotiate over how that will work. How do our people access support? How do our people get workload concerns addressed? The university refused to negotiate. We filed grievances. They just denied the grievances,” said Bill Quirk, executive director at UC-AFT, about the pandemic workload in an interview with the Nexus last month.

“So we ended up filing an unfair labor practice saying you can’t pretend like this work doesn’t exist, you have to negotiate with us.”

In addition to a lack of financial compensation for incurred expenses during remote learning, UC-AFT members also brought up an issue they took with the university’s handling of fixing 401(k) contributions.

“They’ve also refused to negotiate over specific cases where 200 of our members didn’t make retirement contributions to their 401(k) account for two years. We found this out, [and] we got them to fix it. But they didn’t fix a component of it. And again, they can’t just not negotiate the resolution of these problems, [so] we filed them for labor,” he continued.

UC-AFT, now having filed unfair labor practices for at least seven different charges, has expressed frustration with how the UC unilaterally makes decisions without negotiating with the union or making significant changes to their benefit.

The ongoing strike vote follows several instances of the union pressuring the UC to acknowledge their contract negotiation demands. The union is unable to legally strike over their contract campaign and issues such as pay and job stability for at least several more months, but Quirk made it clear that any current strike would be about disrespect from the UC across the board.

The union criticized UC management in a statement to union members, calling them an “administration that won’t respect the rights of their instructors.”

“We are going on strike now because of bad faith by President Drake’s administration, that is, his administration’s refusal to negotiate as the law requires,” the message said.

“At this point, given the impunity with which UCOP breaks state labor law, and their cavalier approach to their legal obligations, a strike is the only way to ensure that they hear our concerns and treat lecturers with the dignity and respect we deserve.”