A group of UC Santa Barbara students are gathering student input in order to advocate for the creation of a grocery shuttle which would serve students living on campus, in Isla Vista and in Goleta. 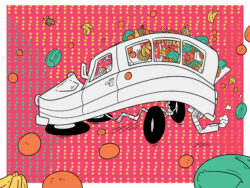 The group of students came up with the idea while taking the community engagement course of Walid Afifi, a professor in the communication department. According to UCSB’s GOLD website, his course asks students to develop a campaign or project that will make a positive impact on the community.

“What we do is we need to identify an issue in the community and then implement a project to create structural change,” Benasuly said. “And I wanted to implement some kind of grocery system because I don’t have a car and I have to rely on my friends to drive in Isla Vista. So, I thought it would be cool to implement something like this.”

The project is currently in a research phase, and the group is reaching out to other schools that have successfully created campus grocery shuttles.

“What we want to do is have a UCSB-only grocery shuttle that would pick up students, ideally in Isla Vista but also in areas on campus where students might not have as many meal plans, like freshmen, or those in San Rafael housing,” Benasuly said.

“We’re still doing research to know for sure which grocery stores, but it would just take them straight there instead of having to use the bus route which makes a lot of stops. This would only be for UCSB students, so hopefully, students will feel safe and people will be encouraged to actually use the shuttle.”

According to current plans, the shuttle will stop at the following grocery stores: Albertsons, Costco, Ralphs, Trader Joe’s, Smart and Final, Sprouts Farmers Market, Vons, Target and Indo China Market. Trader Joe’s was the fan-favorite amongst those surveyed, according to Benasuly.

“Trader Joe’s is, by far, in our survey what most people have indicated that they’d like to stop at,” Benasuly said.

According to the students’ current plan, the bus will run on Sundays. The students would like for the project to be funded by UCSB’s Associated Students (A.S.) or the Financial Advisory Board, which helps manage the funds of A.S. Advocates of the shuttle hope that it will be free for UCSB students and faculty.

“After we’ve collected all the data and worked out the logistics and things like that, it would be funded by Associated Students or the Financial Advisory Board,” Benasuly said. “And then we would see how the pilot program goes. If it’s successful, then we would want the state to provide funding for it.”

The prospective program is still in its initial planning phase, and the project’s group is still looking for insight into student perspectives on a grocery shuttle service. Benasuly is asking for further student input, and those interested can provide feedback by filling out an online survey.

“[We want to] mostly find out which students are we going to be targeting for the grocery shuttle,” Benasuly said. “We currently have an assumption that it’s mostly going to be second and third years that live off campus in Isla Vista, but we want to verify that assumption through this survey.”