The UC Santa Barbara women’s soccer team has opened conference play with a convincing record of 5-1-1 and doesn’t look to end their run of good form any time soon. Currently third in the Big West table, they have the potential to make a run at the Big West championship, which will be held on Nov. 7. 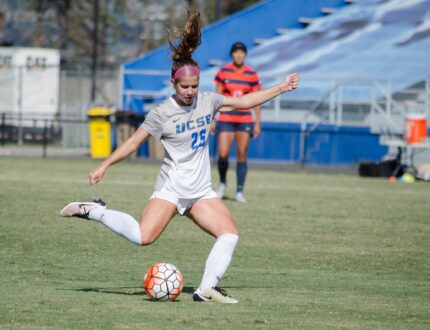 Much of this early success can be attributed to a stellar defensive output from the Gauchos, who have let in just 3 goals in their 7 league appearances. In addition, they have yet to let in more than 1 goal in a conference game. Supported by big minutes from star defenders senior Emma Vanderhyden and freshman Shaye Douglas, the Gauchos managed a streak of 4 clean sheets before letting up 1 to UC San Diego in a 2-1 victory. Junior goalkeeper Evann Smith has been locked down as well, recording a conference play save percentage of 89.3%.

In the Gauchos’ most recent competition, they exhibited heart and class, coming back from a 1-0 deficit to beat the UC San Diego Tritons 2-1 away. After conceding in the 30th minute, UCSB turned the game around almost immediately and equalized from redshirt sophomore midfielder Skye Shaffer’s first goal of the season, which was scored in the 37th minute. Senior Vanderhyden completed the comeback in the 79th minute, placing 1 in the right side of the net to give the team the go-ahead goal. With that shot, Vanderhyden also propelled herself to the top of the team in goals scored as well as total points.

Even with the 2 goals, the Gauchos struggled to create offensive pressure for most of the night. UCSB was only able to get 3 shots on goal while the Tritons were able to fire 7 shots at Smith. The Gauchos made up for their lack of offensive aggression on the defensive side of the ball. In total, the Gauchos amassed a total of 13 fouls while UC San Diego committed 9.

Following the win against the Tritons, the Gauchos look to a tough matchup against rival Cal Poly on Oct. 21. The Mustangs currently sit at the top of the Big West with a 6-1 conference record and wins against top competitors including Cal State Fullerton and UC San Diego. This game will have big implications for seeding in the Big West tournament, as a win could see the Gauchos take first place in the division. The ‘Chos are animated for such an important and historically contentious matchup against their archrivals.