The UC Santa Barbara women’s volleyball team saw their 7-game winning streak end this weekend with a 3-1 loss to the UC Davis Aggies. The ending of the streak came only a few days after their 3-0 victory against the UC Riverside Highlanders on Thursday night. With the loss, the Gauchos now sit a game behind the University of Hawai’i; a team that is 8-0 against Big West opponents this year. 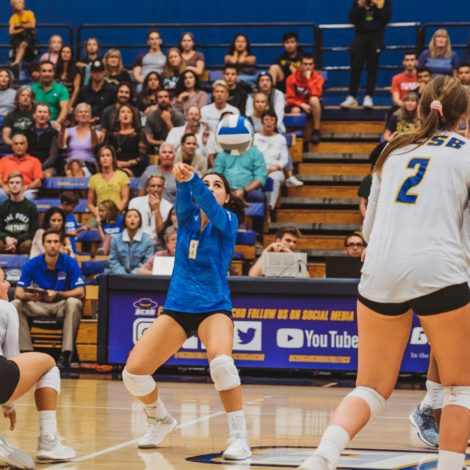 UCSB began play this past weekend against UC Riverside. UCSB was 6-0 in conference play coming into the match, while Riverside was 0-6. The Gauchos came out with the intensity they have played with all season as they held the lead for the entirety of the first game and led by as many points as 6 at one part of the game. The Gauchos were sharp defensively and forced UC Riverside to 7 attacking errors and an abysmal .122 hitting percentage. 25-20 was the final score of the first game.

The second game was not much different for UCSB. The Gauchos stayed on the attack with a .517 hitting percentage and took an early lead in the game. However, the Highlanders were able to storm back and tie the game at 14-14. The Gauchos were not fazed and ended the game on an 11-5 run to take a 2-0 set lead.

In the final set of the night, UCSB played their best defense of the game. The Gauchos held their opponents to a .000 hitting percentage. The offense was also strong, as five different players had multiple kills in the set. The Gauchos led by as many as 9 points and ended the set on a 5-0 run to end the match at 3-0.

The Gauchos stayed on the road for their next match but traveled north to take on UC Davis. In the first set of the match, UCSB was able to acquire a 15-10 lead. However, the Aggies tied the game at 16 apiece. The teams eventually went to extra points to decide the set. After a back and forth, the Aggies were able to string together back-to-back kills to go up 1-0.

The second set of the match was not as competitive for the Gauchos. After going down 2-1 early, UCSB never recovered and lost the set 25-21. The Aggies hit 9 of their 19 blocks in this set and carried the momentum for the rest of the game.

In the final frame of the night, UCSB fought valiantly and tied the set at 23-23. However, after earning 2 more points, UC Davis won both the set and match. The loss ended the Gauchos’ 7-game winning streak and put them behind Hawai’i in the Big West standings.

Next week, the Gauchos will look to get back on track with their match against CSU Northridge and at least go back into a tie for first place with a victory against Hawai’i on Friday night.