The UC Santa Barbara men’s soccer team now sits at the top of the Big West table with 10 points following their last 2 home games against the UC Irvine Anteaters and CSU Bakersfield Roadrunners. The rival Cal Poly Mustangs trail below in second with 7 points. 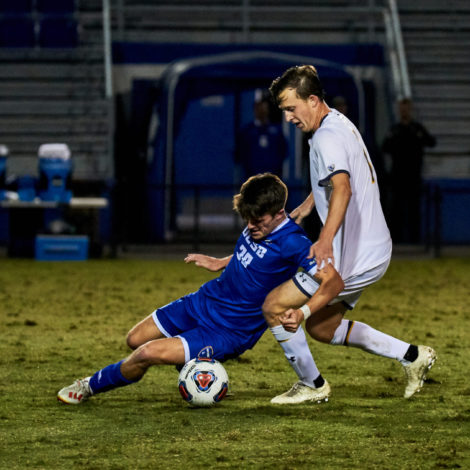 Last Wednesday, the Anteaters traveled to Santa Barbara looking to put a blemish on the Gauchos’ undefeated start. Only, the Gauchos contested the goal in the first 10 minutes with shots from sophomore forward Finn Ballard McBride and freshman forward Salvador Aguilar.

The first goal came early in the 11th minute on a volley from Thaabit Baartman — who now has 6 goals in 13 games — off an assist from Ameyawu Muntari across the face of the goal.

The remainder of the game resulted in a deadlock between the teams until the 90th minute when the Anteaters’ Jake Means scored a header in the center of the box from a long ball about 30 yards out.

The Anteaters did outnumber the Gauchos in shots on goal — 8 to 7 — requiring sophomore goalkeeper Leroy Zeller to make 7 saves on the night.

The Gauchos remained at Harder Stadium for their next game against the Roadrunners, who were hoping to return to their winning ways. The teams contributed 5 shots together — none on goal — in the first 20 minutes of play.

The 21st minute saw 2 goals scored by the Gauchos with only 24 seconds of play between them. Muntari scored the first to reach 5 goals on the season and Aguilar — the previous week’s Big West Offensive Player and Freshman of the Week — netted the second for 4 goals this season.

McBride added another goal to his impressive season just before the half. McBride has now been involved in 12 goals in 13 games — 7 goals, 5 assists. The team was able to score 3 goals on their 4 shots on goal.

The Roadrunners were 1 short of the Gauchos in total shots and shots on goal, but Zeller and the defense were able to comfortably handle their attack and get their 4th clean sheet this season.

The Cal Poly Mustangs lost to UC Irvine to allow the Gauchos to hold the top spot alone.

The Gauchos will play their next match at UC San Diego on Wednesday, Oct. 13, where they will fight to remain undefeated and the sole leaders of the conference.