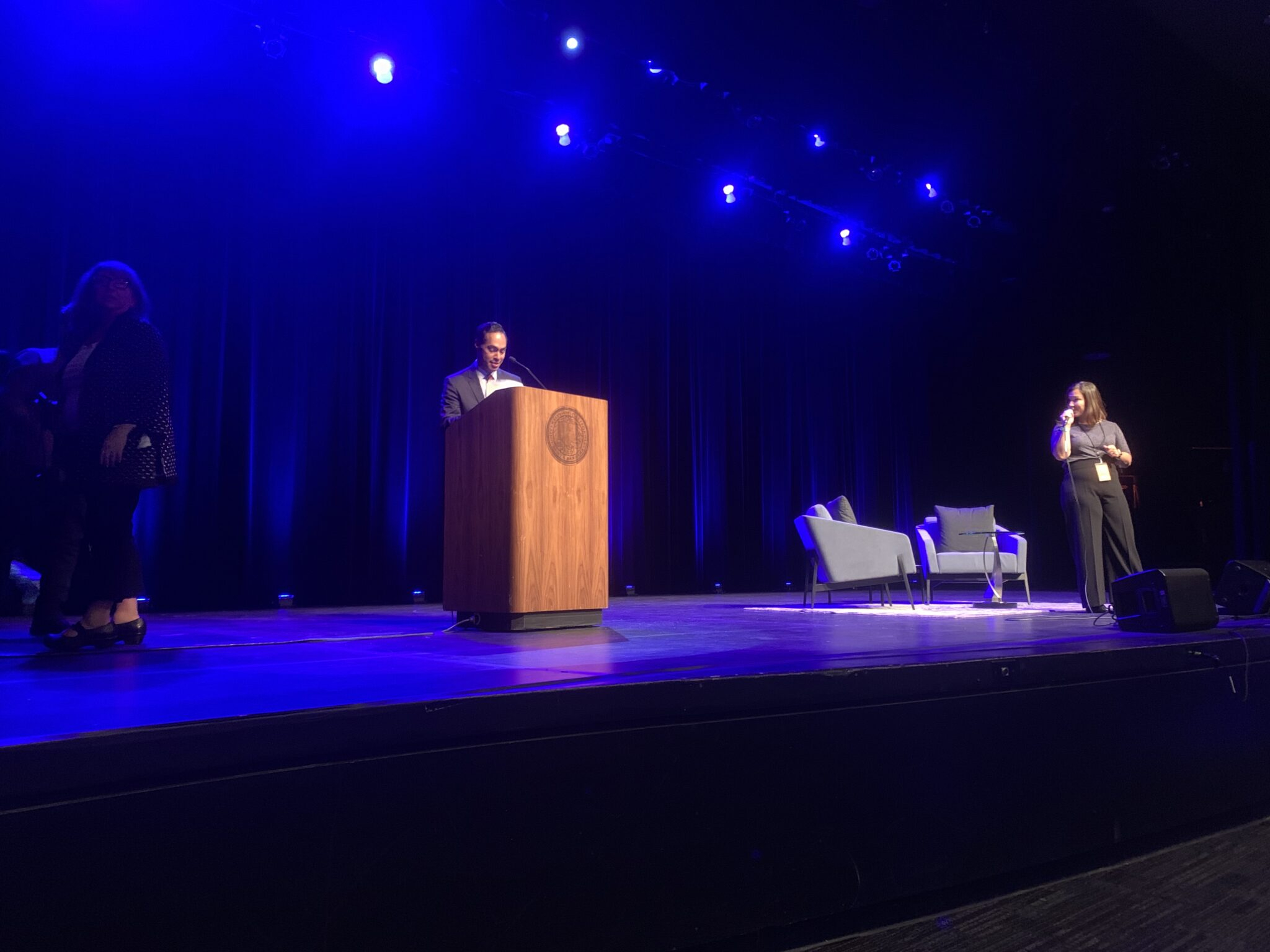 Castro, who was the youngest U.S. housing and urban development secretary under the Obama administration, discussed the ramifications of TX SB8 — a new Texas law restricting abortion six weeks into a pregnancy — as well as his personal experiences with politics, identity and education.

The event — titled “Waking Up From My American Dream” — was the first Arts & Lectures component of the “Justice for All” series, which aims to “[confront] the inequalities that shape our policies, our institutions and our lives.”

Castro began his speech discussing the effects of the pandemic on Americans. He emphasized that the pandemic uprooted many American lives, with many facing obstacles to meet their basic needs, the country confronting systemic racism and attacks on American democracy as seen during the Jan. 6 riots.

“​​It’s fair to say that these past 18 months that we’ve been through are unlike anything that anybody has ever lived through before,” Castro said during the event. “Census figures just reminded us a few weeks ago of very powerfully how much our country continues to change and to mature, to evolve in different ways. All of that. All of that in this year, 2021, is enough to make people feel uncertain, feel sometimes disoriented — for some folks, scared.”

The challenge, according to Castro, is to confront the effects of the pandemic, systemic racism and other issues without “giv[ing] it to our worst instincts to peddle division, fears, and bigotry and xenophobia.”

Castro combined humor with political analysis while conveying his frustration with Texas’s new abortion law. Castro added that many states are trying to follow Texas’s example in introducing anti-abortion legislation.

According to Castro, the solution lies in setting aside divisions and coming together as a community.

“In responding to these times, one path has been this path of fear and division and bigotry,” Castro said. “But there’s also another path. There’s a path that I hope is building on perhaps one of the most fundamental lessons that I hope we have learned or relearned during this pandemic: that all of us are in this together.”

“To me, it starts with treating basic things like health care and housing and education and basic economic opportunity as a human right,” Castro said. “Over the last decade and a half, we’ve come a long way … I believe that in our country, we need to reach for that kind of possibility when it comes to making sure that somebody has a safe, decent, affordable place to live as well.”

Castro pointed to houselessness in Santa Barbara County as an example of how a national response could help resolve a local issue.

“This city of Santa Barbara in this region has grappled with homelessness. You’ve also seen that you can’t handle it alone as one community, even with good intentions and [with] the resources that are available to you,” Castro said. “It requires a larger national, entire community response … But that is another path that we can choose in this moment. And I’m hopeful that because of our experience in the last 18 months, there’s more of a coalition of people to accomplish it.”

Castro said that political engagement amongst students is important because they represent a key portion of Americans and play significant roles in activism and advocacy.

“You hear over and over again how much you’re the future. And you hear that because it’s true. You are the future. But you’re also the present. You represent a big part of what America is,” he said.

“You’re growing up at a time when the fullness of American diversity is on display, I think, in a beautiful way.”

“The destiny of this nation is intertwined with the destiny of the Latinx community. That’s not solely the case with the Latinx community but with other communities as well,” Castro said to the audience. “So the opportunity that you have, those of you who are students, is to forge your own path, to build on the success that you’ve already had in your own lives, to ensure that others can have that same kind of success.”

Castro emphasized the importance of taking initiative in education as well, telling a story from his own time as a substitute teacher.

“I turned around to write something on the blackboard — this long ago we were still using chalk on a blackboard — and somebody from the back of the room rolled up a paper ball … and threw it in the back of my head,” he said. “I didn’t know whether to turn around and act in trying to figure out who had done it or to act like nothing had happened and save my dignity.”

Castro said that, while he chose to pretend nothing had happened to preserve his dignity at the time, the situation was reflective of his unpreparedness in the classroom, something he hopes to encourage other students to change.

“Always be prepared. Whether it’s something as simple as making sure that you do the assignment, leading ahead, being there all the time. Always be prepared for what you’re doing. And don’t be afraid to fail or to lose. And then to try again,” he said.

Castro also shared his family history, detailing how his grandmother arrived in the U.S. in 1922 as a 6- or 7-year-old orphan, and how his mother was a Chicanx activist.

“Think about that; just two generations after my grandmother got to this country, her only two grandchildren, my brother was working in the United States Congress and I was running for president of the United States,” Castro said.

After Castro shared his own story about education and his family, UCSB Associate Dean of Social Sciences Aida Hurtado began asking Castro questions about his book and political experience, as well as pre-approved questions from graduate students.

“What are some approaches you have to making higher education more attainable and affordable to students like myself, including loan-forgiveness initiatives?” was one pre-approved question from a UCSB graduate student.

Castro said that student loan debt “limit[s] people’s potential so much,” as many face financial difficulties while trying to procure a degree.

“Free community college and public universities. In addition to that, a significant loan forgiveness along the lines of Senator Warren’s that I believe would transform the ability of especially low-income families to be able to have their kids go to college and get a good education,” Castro said.

Following the pre-approved question-and-answer session, UCSB students were allowed to stay behind to ask Castro questions on the spot.

During the student question-and-answer portion, a Nexus reporter asked Castro, “A lot of times, we hear calls from politicians speaking to students about how they’re going to come forward and change the game when they get into politics. Unfortunately a lot of POC students — and women of color specifically — face a lot of internalized racism and imposter syndrome that prevents them from pursuing certain opportunities. Could you speak to your own experiences in dealing with such things and how students should go about facing them when looking to go into this career?”

According to Castro, the solution lies in finding guidance from the people who have been in the industry for a long time and knowing that everyone has a unique perspective to offer.

“I agree with you that people coming from disadvantaged backgrounds, historically sidelined or cut out, underrepresented in certain positions, not having a background in their family of people having done those things before — that can cause this imposter syndrome and self-doubt of whether you belong,” Castro said.

“My advice is to find somebody around that table or in that orbit, whoever you think is the best candidate for that, that will help guide you,” he continued. “I think you raise a very important question that a lot of people feel. There is nobody else like you; nobody else thinks exactly like you. Nobody else in the history of the world has put together exactly the same thoughts or experiences that you have. And so whenever you’re in a room, always believe that you have something unique to offer, because you do.”