The UC Santa Barbara women’s soccer team went 1-0-1 this past weekend by beating the UC Davis Aggies 1-0 and tying with the Hawai’i Rainbow Wahines 0-0. The victory and draw move the Gauchos to a record of 4-6-3 as they continue their last month of regular season play. The Gauchos currently sit in fourth place in the Big West standings and hope to move up the leaderboard before the Big West Tournament in November. 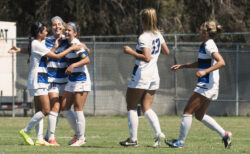 On Thursday, UCSB traveled to Aggie Soccer Field to take on conference rival UC Davis. The Gauchos began the game sluggish and continued their trend of struggling to score in games. UCSB barely tested UC Davis goalkeeper Nicki Rucki, as she was forced to only make one save in the first half. The Gauchos shot 4 other times but missed the target completely. Hawai’i was able to get 2 shots on goal; however, UCSB goalkeeper Evann Smith was able to send everything away. UCSB was forced to defend for most of the first half and did so aggressively by committing 7 first-half team fouls, as they also gave Hawai’i 3 corner kicks. UCSB was only able to attempt 1 corner kick in the first half.

The slow start continued in the second half, as no goals were scored. However, the Gauchos tested Rucki a bit more by adding another 2 shots on goal. The UCSB defenders played well, as no shots on goal were conced- ed by the Gauchos for the rest of the game. No corners were taken in the second half, while both teams were called for fouls twice. With no change in the score, the match went to overtime.

The overtime period finished after only a few minutes. In the 97th minute, UCSB forward Leila Em- merson fired a shot from her left foot into the right side of the net. The golden goal ended the game at 1-0 and put UCSB back into the win column after their 1-0 defeat against Cal State Fullerton. The goal was assisted by Shaye Douglas and Alyssa O’Brien.

UCSB looked to carry their momentum over the Pacific Ocean as they went to Waipi’o Peninsula Soccer Stadium to take on Hawai’i. The Gauchos played with much more pace than they had in previous games and continued to attack Hawai’i goalkeeper Lauren Mar- quez. UCSB had 5 shots on goal in the first half alone. However, even with more chances, the Gauchos did not manage to score. Gau- cho goalkeeper Evann Smith played spectacularly, as she made 5 first-half saves.

The attack gradually moved away from Hawai’i’s side of the field to UCSB’s as Hawai’i had 2 more shots than UCSB in the second half. The game became very physical, as both teams combined for a total of 13 second-half fouls. Smith was forced to make 1 more save, which was enough to send the game to overtime.

The first half of overtime saw UCSB with a rejuvenat- ed attack as they had 3 shots in the 10-minute period. The final shot was the closest, as UCSB forward Elise Ziem hit the crossbar in the 100th minute. Nothing else came close to the goal for the rest of the game as UCSB and Hawai’i finished the game tied at 0-0.

UCSB will look to get another positive result this Thursday as they continue Big West Conference play against the Cal State North- ridge Matadors. UCSB will take on CSU Bakersfield on Sunday.

A version of this article appeared on p. X of the Oct. 7, 2021 print edition of the Daily Nexus.