The Daily Nexus
Opinion
Argument in the Office: Booster or Bust
October 7, 2021 at 11:00 am by Emily Kocis and Toni Shindler-Ruberg

More Than an Extra Boost

Arriving home in March 2020, I returned to a household in lockdown. But while most of the world masked up and stayed home, my mother returned to work each day as a nurse at an elderly nursing home. In December 2021, she was among the first wave of healthcare workers to receive their initial dose of the vaccine. And, for the first time in almost a year, my family let a small collective breath slip out. The skies had parted. We celebrated.

Today, while it feels as though we have lived lifetimes in quarantine, a little over a year has passed since COVID-19 was declared a national emergency in the United States. In that time, we have come a long way in vaccinating and, as a result, protecting the American public. As of Oct. 3, 56.5% of the U.S. population have been fully vaccinated, while 65.1% have received at least one dose. However, we still have a long way to go.

From the very start of the pandemic, there have been certain individuals who are at higher risk of serious symptoms resulting from COVID-19. Among them are older adults,  immunocompromised individuals and healthcare workers — all of whom were among the first to receive vaccinations. Yet, these groups are still facing the brunt of the virus.

This is not just conjecture. As of July 2021, nearly half of vaccinated people hospitalized with breakthrough COVID-19 infections were immunocompromised individuals, despite only making up only 2.7% of the U.S. adult population. Clearly, vaccinations alone aren’t cutting it for these individuals. The same applies to older adults, as 70% of breakthrough infections that have required hospitalization have been in adults 65 and older while this same population accounts for 87% of breakthrough deaths.

However, for those predisposed to aggressive symptoms, as well as healthcare and frontline workers who confront constant exposure to COVID-19 on a daily basis, booster shots are vital to our collective journey forward in protecting those who need it most.

Studies show that older adults and people whose immune systems are suppressed produce few to no antibodies after getting the COVID-19 vaccine. Boosters have been proven to help them to produce more. Additionally, healthcare workers who face constant exposure to the virus have also been declared eligible for boosters by the Centers for Disease Control and Prevention (CDC) in the hopes of boosting immunity and maintaining staffing levels. Keeping our frontline workers healthy is paramount as we navigate this ongoing pandemic.

When do we start prioritizing the solutions we do have available for the individuals who are the most at risk due to others’ reluctance?

For those like my mother and countless others who are among the most directly and viciously targeted by this virus, booster shots can make the difference. In fact, we need to be making sure they are able to make that difference. However, as of right now, the CDC has told my mom that she cannot receive a booster shot. Indeed, while boosters are available to those who received the Pfizer-BioNTech vaccine, there is no additional protection available yet for those who received the Moderna or Johnson & Johnson vaccine.

Maybe seemingly not as vital or necessary for those of us vaccinated young folks without underlying health conditions, booster shots are in fact vital for those groups who continue to be directly targeted by this virus. While boosters are available, and should be, for those who received the Pfizer vaccine, those who received the Moderna or Johnson & Johnson vaccine are left desperate and waiting.

Additionally, boosters not only need to be available but widely so. As the delta variant continues to run rampant, studies by the CDC show the variant has coincided with higher hospitalization rates among those under the age of 18. And for some young people, COVID-19 symptoms never go away. Lasting symptoms like dizziness, memory or sleep problems and fatigue do not go away with a negative test result. In more serious cases, the virus can inflict permanent organ damage to one’s heart, lungs and brain along with causing potential blood clots.

Protecting vulnerable individuals is especially important as 43.3% of the U.S. population remains unvaccinated. Among them, there remains a significant group that remains fast in their outright refusal to get vaccinated. This group — disproportionately white, rural, evangelical Christian and politically conservative — are adamant in their refusal of the coronavirus vaccines. While educating individuals and urging them to get vaccinated is important and worthy of time and resources, we have to accept that despite our best efforts, there will continue to be individuals who refuse to get vaccinated.

At what point do we stop pouring money and energy into persuading the unpersuadable? When do we start prioritizing the solutions we do have available for the individuals who are the most at risk due to others’ reluctance?

Boosters are safe, effective and a viable solution for millions who are still living cautiously in fear of this virus. Focusing efforts on providing boosters for all vaccinated individuals, not just those who received the Pfizer vaccine, is the next step toward normalcy. Boosters work, but only if we let them.

Emily Kocis believes we should put boosters to work and our minds at ease. 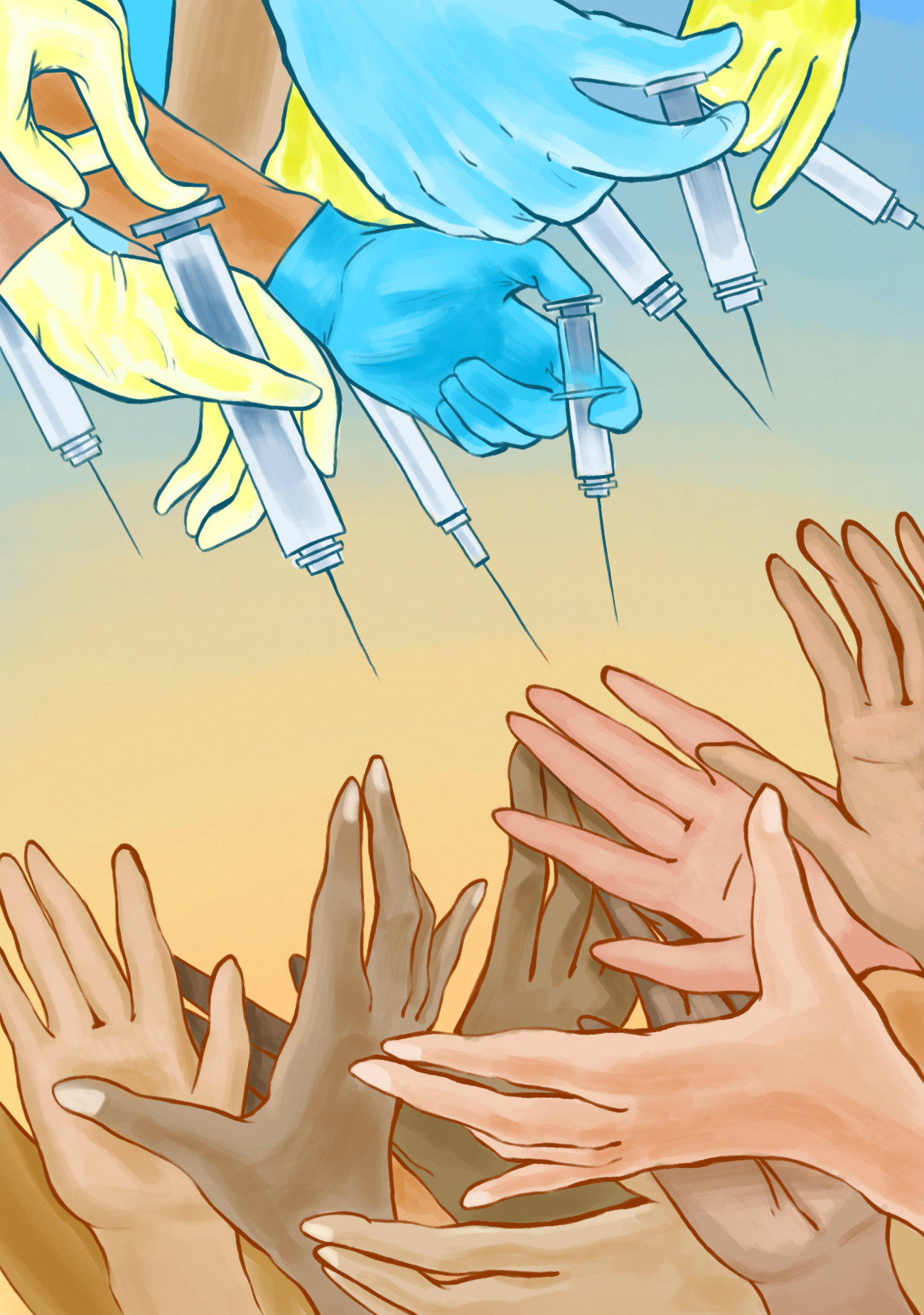 Content within my COVID-19 social bubble, I inadvertently placed myself within a COVID-19 news bubble as well. While global vaccination rates are going up, large parts of America and other countries are falling behind. It’s easy to blame these numbers on staunch anti-maskers and anti-vaxxers, but the reality of the pandemic — and responses to the pandemic — is a larger, more nuanced issue.

Data compiled by Our World in Data and reported by the New York Times reveals that while nearly 80% of vaccines have been distributed in high- and upper-middle-class countries, low-income countries have only received 0.5% of vaccines.

If these numbers seem dramatic, they are.

The numbers reveal a dramatic — and dangerous — divide in vaccine distribution and equity.   Those who have not yet been vaccinated include those who do so out of choice, for one reason or another. Taking a psychological approach, the issue of vaccine familiarity and fear comes into play. Among Americans who choose to remain unvaccinated, a July survey reveals that the top three reasons include a fear of side effects, a desire to ensure vaccine safety and a general mistrust of vaccines. Advocating for a third shot while people are refusing their first shot is like trying to shove a square peg through a round hole while the world is on fire around you — rather inefficient.

More concerningly, the unvaccinated here in the U.S. and around the globe include those who simply do not have access to vaccines. Therefore, the majority of funding should be allocated toward improving vaccine equity, ensuring that we boost vaccination rates globally, not just in middle-to-upper-class communities and countries. Global vaccination is the best approach to obtain the elusive herd immunity and increased public safety we crave so badly.

As we check daily COVID-19 statistics over our morning coffee, it’s clear that vaccine inequity is a matter of life and death. As of Oct. 5, three out of the five countries with the highest COVID-19 deaths qualify as developing economies: Brazil (nearly 598,000 deaths), India (over 449,000 deaths) and Mexico (nearly 279,000 deaths). Many houseless people are older and/or suffer from underlying medical conditions, making them one of the most disproportionately at-risk populations for COVID-19. With limited access to technology and transportation, these individuals are often unable to get the resources, attention and vaccines they need.

The world’s poor and underserved communities are suffering the consequences of production line delays, import/export bans and unequal distribution of resources. This includes a lack of financial and educational resources, as well as a shortage of vaccines themselves and people available to administer them. Beyond vaccines, the inequitable distribution of resources like diagnostic equipment, oxygen tanks and personal protective equipment further compounds the divide between those with and those without.

In an already politicized and polarized state of the world, vaccine nationalism threatens more harm than good.

In June, COVID-19 Vaccines Global Access (COVAX), a global organization with the self-described aim of “providing innovative and equitable access to COVID-19 diagnostics, treatments and vaccines” pledged to secure and distribute 1.9 billion vaccines by the end of 2021. In September, COVAX cut that availability forecast by 25%. Experts suggest over 11 billion vaccines are required to slow the spread of COVID-19.

In response, the World Health Organization (WHO) enacted an international moratorium on booster shots with the hope of increasing vaccine availability for at-risk populations who had yet to receive a vaccine. The agency encouraged wealthier nations to redistribute vaccine booster stockpiles to countries that had yet to provide their citizens with first or second doses. At the same conference, WHO Director-General Tedros Adhanom Ghebreyesus reported, “High-income countries have promised to donate more than 1 billion doses, but less than 15% of those doses have materialised.” In an already politicized and polarized state of the world, vaccine nationalism threatens more harm than good.

Viral variants emerge from random genetic mutations. If COVID-19 is allowed to continue spreading and infecting through countries with low vaccination rates, there is a greater chance for existing variants to increase in severity or for new variants to mutate.

Booster shots would be less controversial if a higher percentage of the global population were fully vaccinated. However, since we haven’t reached this global majority of vaccine-protected individuals, booster shots should only be available to the highest-risk populations (including the elderly, the immunocompromised and front-line workers with direct, high-risk contact with the public) — although this still should not be our primary focus.

In the words of Ghebreyesus, “As the world’s largest producers, consumers and donors of vaccines, the world’s 20 leading economies hold the key to vaccine equity and ending the pandemic. Now is the time for true leadership, not empty promises.”

Reprioritize vaccine equity. We cannot move toward a safer, healthier world if we neglect whole swaths of the global population. When it comes to public health and safety, nobody should have to rely on leftovers.