On Sunday, Sept. 26, the UC Santa Barbara women’s soccer team took on Cal State Fullerton. The match was a defensive battle resulting in a 1-0 loss for the Gauchos. Going into the game, the Titans were 3-7-0, whereas the Gauchos were 3-5-2. 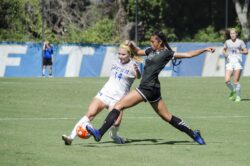 The 250 fans in attendance saw a slow game in the beginning of the match as the Titans struggled to put up any shots on goal. On the other hand, UCSB began the match on the attack as they fired 5 shots. However, none of these shots found the back of the net. With only 5 corner kicks combined between the two teams in the first half, the action was minimal. The frustrated Cal State Fullerton players had 4 fouls as they tried to get things going with defensive plays, whereas the conservative Gauchos finished the first half with no fouls.

It was not until the second half when things got going. The Gauchos put up 7 shots to the Titan’s 6, but the only shot of the game from Fullerton midfielder Karla Rodriguez, a header that crossed the goal line, made all the difference. Her goal in the 72nd minute was all Fullerton needed to defeat UCSB. It seems the yellow card issued to freshman defender Alyssa O’Brien in the 70th minute fueled Cal State Fullerton.

Fullerton’s goalie DeAira Jackson played at a high level, saving all 5 shots the Gauchos put on target. The offense for the Titans provided the bare minimum, but it was enough to secure a tough win on the road. Despite UCSB outshooting the Titans 12-6, one of Fullerton’s 4 shots on goal that got past UCSB goalkeeper Evann Smith was the fatal blow. Even with the goal allowed, UCSB Head Coach Paul Stumpf had high praise for his goalkeeper and the rest of his team.

“I thought our goalkeeper [Evann Smith] played very well,” said Stumpf according to ucsbgauchos.com. “She dealt with a number of longer-flighted balls in, a lot of set pieces and corner kicks, and she was solid. I thought Sophia Vivar had a pretty good day, and I thought Lauren Helwig did well when we moved her up to the nine, and of course Emma Vanderhyden as well.”

The game elapsed a total of an hour and 56 minutes as the referee blew the whistle to give the Titans the 1-0 victory. The Gauchos hope to bounce back in their next road game against the UC Davis Aggies, while Cal State Fullerton takes on the UC Irvine Anteaters.