The UC Santa Barbara men’s water polo team took part in the 2021 Mountain Pacific Sports Federation Invitational this past weekend and finished with a record of 3-1. The Gauchos finished in fifth place with their 14-6 victory over the Pacific Tigers — the No. 8 team in the nation. 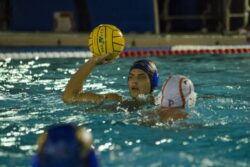 The No. 5 Gauchos began tournament play against their Golden Coast Conference rivals, the No. 13 UC Irvine Anteaters. With the victory, UCSB advanced to the second round of the tournament and improved to 12-2 on the year. UC Irvine dropped to 5-3 with the defeat. After a closely contested first period which saw the Anteaters and Gauchos tied at 4 apiece, the Gauchos were able to shake off their rust and take control of the game.

In the second period, UCSB had four different players score, as the Gauchos took a 9-5 lead into halftime. After playing a 2-2 third period, UCSB dominated again in the fourth, as their 4-1 final frame capped off a 15-8 victory. Senior Cole Brosnan led the Gauchos in goals scored with 4.

After defeating UC Irvine, the Gauchos moved on to play the No. 3 Stanford Cardinals. The Gauchos were not competitive to begin the match, as Stanford held a 3-1 lead in the first period. However, later in the period, UCSB was able to tie the match at 3-3 with 2 goals from senior Leo Yuno. Even with these goals, UCSB still found themselves losing 5-4 at the end of the first.

This score would stand until late in the third period when the match was tied once again. Even with this late push, the Gauchos were defeated by a score of 12-10, as they were shut out by Stanford in the final eight minutes of the match. The defeat pushed UCSB into the elimination bracket and into a matchup with the No. 7 UC Davis Aggies.

With both teams out of contention to be Mountain Pacific Sports Federation (MPSF) Invitational champions, the Gauchos and Aggies battled for a spot in the match for fifth place. After another slow start from UCSB, the Gauchos found themselves down 3-1 after the first period.

After this, the Gauchos began to find the back of the net. With 3 goals from Brosnan, the Gauchos won the second period 5-2 and went into the locker room with a 6-5 halftime lead.

After UCSB gave up 3 straight unanswered goals, Brosnan scored his fourth and fifth goals of the night in addition to freshman Dash McFarland’s goal to give UCSB a 9-8 lead heading into the final period.

The Aggies were able to retake the lead early in the fourth, but another goal from Brosnan and junior Sam Nangle put the Gauchos up 11-10. The Aggies were able to tie it once more, but a goal with 43 seconds left by junior Tommy Hawkins put UCSB up for good. Brosnan scored a season-high of 7 goals in the match.

With their win against the Aggies, UCSB advanced to play in the match for fifth place against the Pacific Tigers. The first half of play was heavily contested, as the Gauchos only had a 1-goal lead at the half. In the second half, the Gauchos were able to pull away, as goals from McFarland and Yuno helped the Gauchos extend their lead to 10-5.

Pacific was only able to muster one more goal the rest of the way as UCSB clinched fifth place at the MPSF Invitational. No. 1 USC won the tournament, while UC Berkeley finished in second place. UCLA and Stanford placed third and fourth, respectively.