As the Major League Baseball (MLB) regular season is coming to an end, there are many candidates to take home the best awards the MLB has to offer. Some awards are more certain than others, but with a week left, many of the top-notch starters will be resting as their teams clinch their place in the postseason. 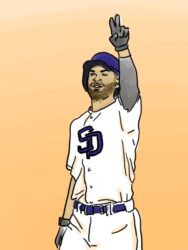 Starting with the most obvious award is the should be unanimous award winner of the American League Most Valuable Player, Shohei Ohtani. Hailed as the “Babe Ruth” of Japan when he made his MLB debut, it’s safe to say he has exceeded his expectations.

With injuries taking a toll on his first two major league seasons, Ohtani has broken out this season with 45 home runs, 98 runs batted in and 24 stolen bases. On top of that, Ohtani has been one of the best pitchers this year, racking up 156 strikeouts and pitching to a 3.18 earned run average.

On the other hand, the National League MVP race is a little more uncertain with three names surfacing. The contenders are Bryce Harper, Fernando Tatís Jr. and Juan Soto.

Harper’s case can be made stronger if the Philadelphia Phillies make it to the postseason, but as of right now, he holds an impressive resume nonetheless. For starters, he has 34 home runs, a .433 on-base percentage and a .617 slugging percentage.

Soto has bounced back from a mediocre first half of the season to putting up ungodly second-half numbers. He is second in the MLB in batting average, first in walks, first in wins above replacement and second in on-base plus slugging.

With the impressive numbers of all these players, it would seem the deciding factor could be Harper’s Phillies if they were to make the playoffs.

The American League Cy Young Award, which goes to the best pitcher, was just about settled a month ago to go to Gerrit Cole, but due to disastrous performances in his last outings, there is a new favorite in Robbie Ray.

Robbie Ray has an impressive 2.68 earned run average, 244 strikeouts, 7 wins above replacement and 23 quality starts, which are all the best among American League pitchers.

The National League Cy Young Award race also took a turn in the last couple weeks of the season as Corbin Burnes has been steady, Walker Buehler has had his troubles and Max Scherzer has been dominate since being traded to the Los Angeles Dodgers.

Since joining the Dodgers, Scherzer has been the best pitcher in the league, maintaining a 1.43 earned run average and accumulating a whopping 7 victories with zero losses. The case for Scherzer over Burnes on the Milwaukee Brewers is he has pitched more innings, won more starts, allowed fewer hits despite more innings and has a lower WHIP at .83.

All in all, there is always a shock in the MLB end-of-the-season awards whether it be a unanimous selection or a snub at an award. One thing is for certain, this year’s race to the top awards has been intense, besides the AL MVP which is favored to Ohtani for possibly the greatest baseball season we have seen in the modern era.

I think Bueller for LA deserves the Cy Young. Too much emphasis is on how you end the season. Bueller has been the NL best pitcher all season long

how come Julio Urias not mentioned for CY Young