The Daily Nexus
Science & Tech
Back From the Brink: 20 Years of Snowy Plover Conservation at Coal Oil Point Reserve
September 30, 2021 at 6:00 pm by Sean Crommelin

The western snowy plover (Charadrius nivosus) once roamed widely through the West Coast, from Baja California to Southern Washington.

Instantly recognizable to anyone who has ever strolled down Sands Beach, the small, white birds scutter about the shoreline and coastal dunes, foraging for invertebrates among beach sand and wrack, which is resource-rich kelp that washes up from the ocean and provides shelter for the plover’s prey. 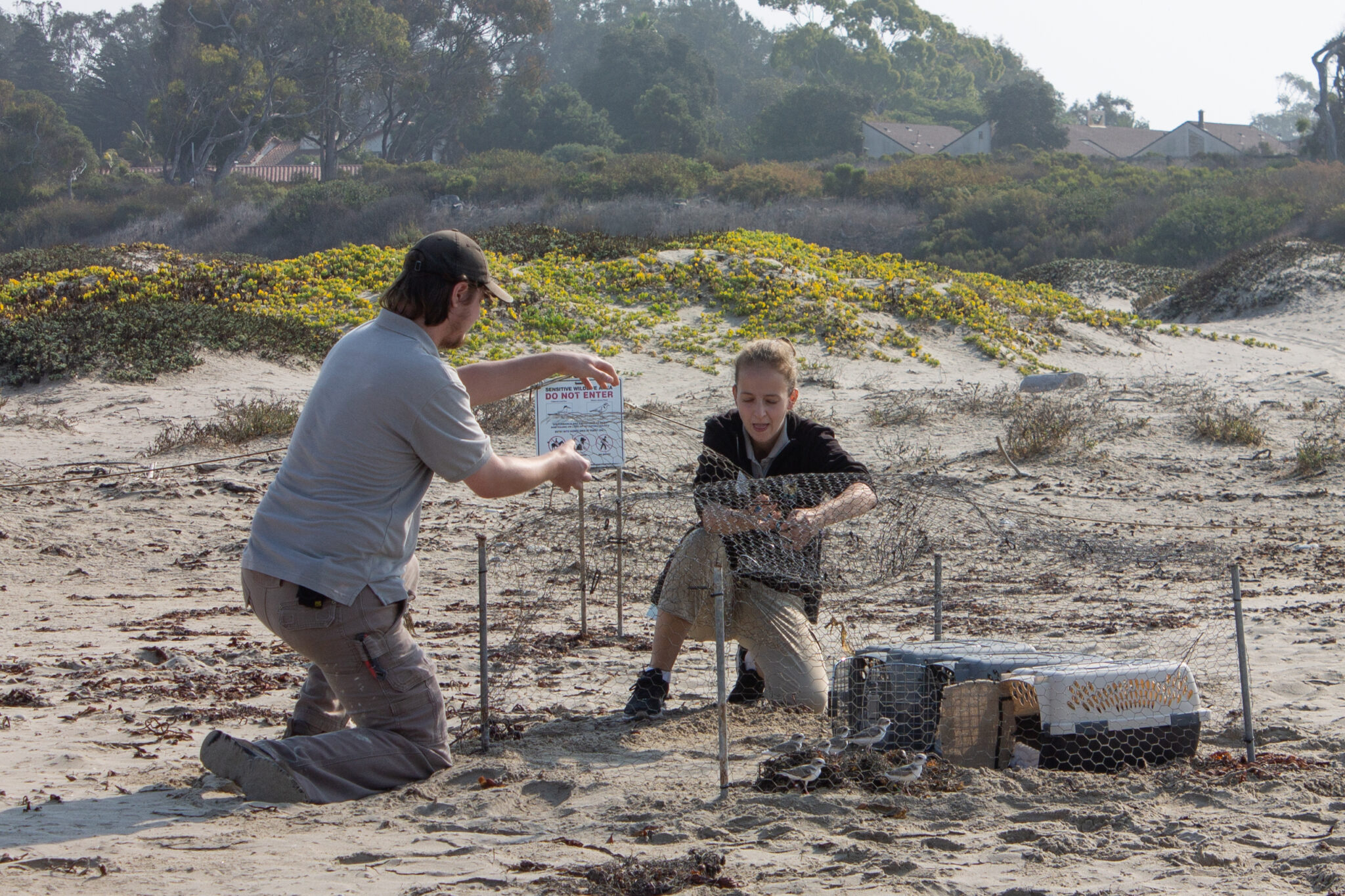 However, with coastal development throughout their range — and particularly rampant development in Southern California — their numbers began to dwindle during the mid-20th century as their habitats became increasingly fragmented.

Being birds which rely on relatively undisturbed beaches to nest and reproduce, coastline management throughout California served to imperil the species, as even forms of recreation like sunbathing, dog walking and beachcombing made many beaches unsuitable for nesting.

By the year 2000, there were only 1,500 breeding snowy plovers nesting throughout all of coastal California, a precipitous drop for a species which once numbered in the thousands.

However, there are still refuges throughout California where the plovers continue to nest. One of the most important of these is at Sands Beach on Coal Oil Point Natural Reserve, less than a mile from UC Santa Barbara. Here, the conservation program for the snowy plovers seeks to protect the plovers nesting on Sands Beach to perpetuity.

Such a thing is especially remarkable because for decades, there were no breeding pairs of snowy plovers at Sands Beach.

The program, which celebrates its 20th anniversary this year, has been responsible for maintaining and monitoring the snowy plovers of Sands Beach, the long stretch of coastline between Ellwood and Coal Oil Point, since 2001. In winter, the population of snowy plovers can number around 400 birds. It is the largest aggregation of its kind in all of the United States.

“We thought — we hoped — to get some plovers to nest here again. And now we have an average of 35 [pairs] during the breeding season. So, it’s an amazing result to get,” said Cristina Sandoval, director of Coal Oil Point Reserve.

Sands has technically been a protected beach since 1970, as part of the larger Coal Oil Point Reserve encompassing much of the lands surrounding Devereux Slough. However, there were little protections in place for the snowy plovers on the beach until the establishment of the program.

A number of developments led to increased protections for the plovers. Sandoval, the former co-manager of Coal Oil Point Reserve with her husband Kevin Lafferty, became the new official director of the reserve in 2001.

Alongside this was the fortuitous appearance of successful nesting snowy plovers near Sands Beach at the mouth of Devereux Slough in 2001, first sighted by Sandoval and Adrian O’Loghlen, a researcher at UCSB.

This caused a resurgence in research and conservation interest regarding the plovers and Sands Beach, resulting in the creation of a docent program. The Santa Barbara Audubon Society also worked to provide funds and docents to protect snowy plover chicks.

In 2004, the first management plan for Coal Oil Point Reserve was written by Sandoval with the help of UCSB faculty, intended to address issues like unleashed dogs, trespassing and the conservation interests of the western snowy plover. Since then, the program has only grown.

“When we started, I didn’t even have a salary … and I didn’t have any staff. Now we have a plover coordinator that is full time dedicated to the snowy plovers. We also have a lot more docents and volunteers that cover the beach, basically, seven days a week,” Sandoval said.

A challenge since the program was established has been balancing recreational access to Sands Beach with the interests of the plovers, who are sensitive to a number of human activities.

“Really what I manage is people. That’s the main factor that we really need to control to bring this species back from low numbers. The reason the plover numbers declined in the last several decades is because of uncontrolled recreation, beach grooming and development on the beach,” Sandoval said.

In particular, dogs — and especially unleashed dogs — have been a perpetual challenge to the conservation interests of the snowy plover. Unleashed dogs cause plovers to become, at best,  stressed. At worst, plovers can be chased and harassed, even mauled, by dogs. Research by Lafferty, in fact, has shown that they cause 10 times the amount of disturbance that humans cause.

However, despite these challenges, the program has succeeded in protecting the plovers and ensuring their survival, all while still largely allowing access to the beach.

“From studying the plovers here, at Coal Oil Point, we thought we could achieve that balance. But it’s all very site specific. It worked here but may not work on other beaches,” Sandoval said.

On Tuesday, Sept. 21,, the program, in collaboration with the Santa Barbara Zoo, released nine snowy plovers back into their natural habitat, as it has periodically done for the past two decades.

“Most of the plovers that are rehabilitated in the zoo came from eggs. A high tide, for instance, could wash the eggs away, so we check the nests every two days. [After a high tide,] we watch for eggs that have been washed away from the nest, maybe a few feet away,” Sandoval said.

At 9 a.m., docents with Coal Oil Point Reserve and their collaborators brought forth chicks which they had been rehabilitating and incubating at the Santa Barbara Zoo. 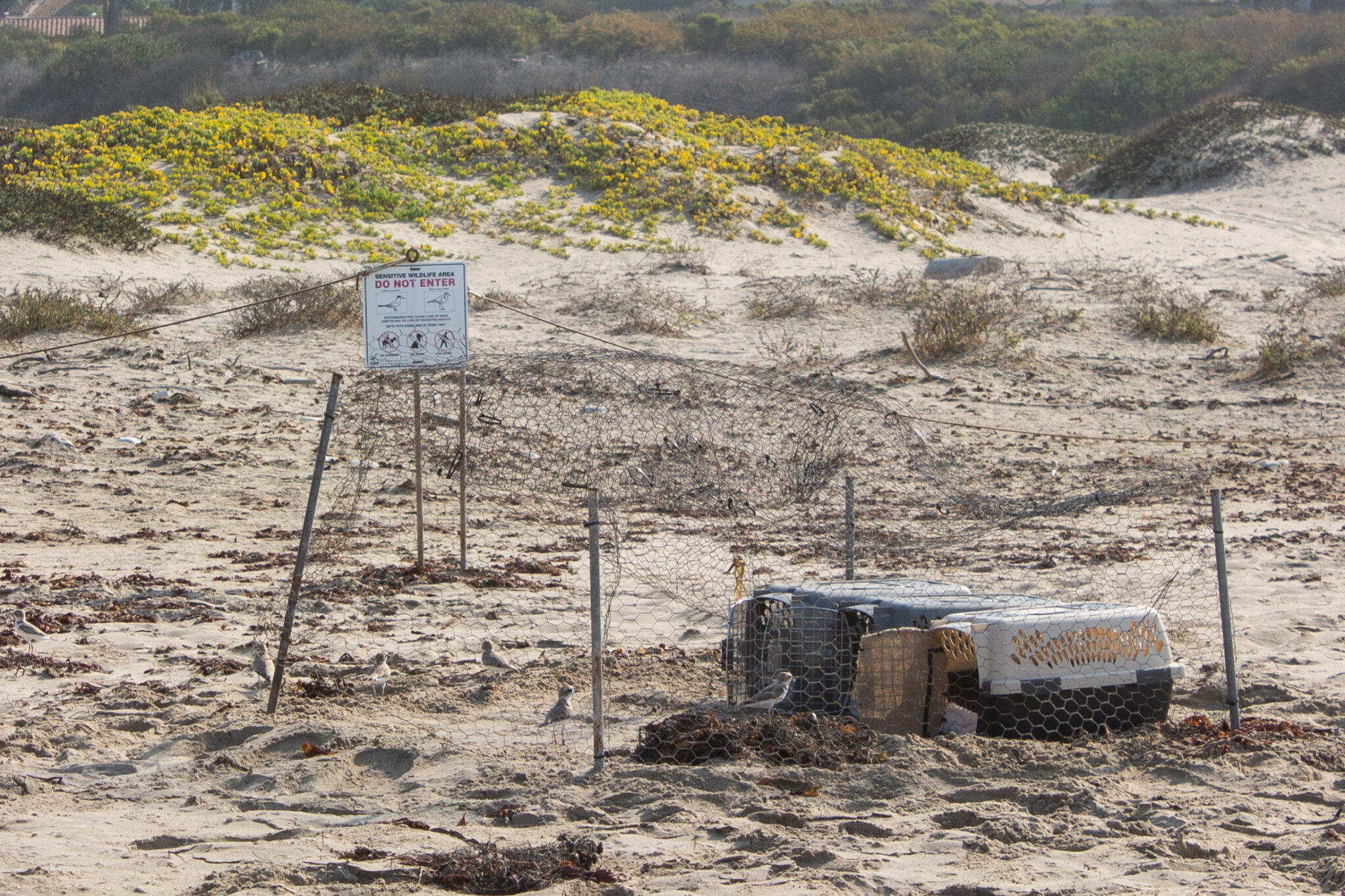 The docents and their collaborators with the zoo wait as the plovers become accustomed to their new environment. Kaiyi Yang / Daily Nexus

Initially nestled in little crates, the plovers were then incrementally moved to slightly larger cages following their arrival to the beach. From within their enclosure, they could see the entire coast and, somewhat closer, the fenced-off portion of Sands where dozens of their fellow snowy plovers roam, rest and nest.

Then, the docents and their collaborators with the zoo wait.

Eagerly, they watch as their plovers grow more accustomed to their new surroundings and become less stressed and agitated. The flowers, the sand, the sea spray and the slough become once again ingrained in the plover’s memory.

After two or three hours, the plovers are liberated; their cages are opened and the docents and others watch — with barely concealed jubilation — as the birds walk out onto the beach and return from whence they came months before.

For Sandoval, such occasions serve as a reminder of the successes of the conservation program at Sands Beach, which has since been emulated at other beaches in both the north and south.

“That moment when you’re able to release a species that is threatened with extinction and know that you’re putting one more individual out in nature — it’s very rewarding,” Sandoval said.

“Working with conservation is very hard work — and it’s stressful — so when we have a success story, it really gives you hope for doing more of it.”