The Daily Nexus
Sports
Women’s Soccer Comes Out on Top in Close Match
September 23, 2021 at 11:21 am by Ethan Gardner

The UC Santa Barbara women’s soccer team secured a hard-fought 1-0 victory last Sunday, against a solid University of San Diego side with a strong defense. This helped break a 5-game streak without a win, signifying a potential change in momentum as the Gauchos prepare for conference play. 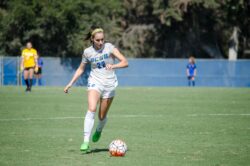 Over those last 5 games, the Gauchos found the back of the net only 3 times, while letting in 13 goals to the opposition. Despite these numbers, the ‘Chos turned out a strong outing on Sunday, producing a clean sheet and 5 shots on goal. With the first Big West tournament game scheduled for Sept. 23, a change of pace was critical.

“Today, I feel like we didn’t make the same kind of massive mistakes [as the team had in previous games],” UCSB head coach Paul Stumpf said, according to the UCSB Gauchos website. “Pitching a shutout for the first time in a while is almost as important as getting a goal.”

Optimism appears on the rise, as a win against USD is no easy task. The Toreros took down Cal State Fullerton, Army, UC Irvine and Long Beach State in their 4-4 start to the season, all of which are formidable opponents and three of which are Big West divisional contenders.

“USD has had a strong preseason and has beaten three of our Big West competitors this year so it was really awesome to hold a good team to zero goals and close out with a win,” senior midfielder Lauren Moss said. “I feel like the win against USD was just what we needed for our confidence.”

The Gauchos made this win happen by capitalizing off of their chances and holding fast defensively. They kept the pressure on USD throughout the first half, as freshman forward Leila Emmerson found the net twice with several well-placed shots before freshman midfielder Lauren Helwig notched one into the right side of the goal to give the Gauchos the lead in the 34th minute of the match.

From there, the Gaucho defense starred, despite an aggressive offensive half from the Toreros. They were able to maintain the shutout, despite only having 35% possession. USD continued to push for the equalizer, managing to obtain 6 corner kicks and 5 shots in the second half, but a combination of some excellent saves by junior goalkeeper Evann Smith and a team effort on the defensive side of the ball kept the Toreros at bay.

Following this win, the team can look forward to an exciting matchup against UC Riverside on Sept. 23. The team has big aspirations for the coming season, beginning with this game, as they look to compete for a division title for the first time since before the COVID-19 pandemic.

“Our team’s goal that we set forth at the beginning of the season was to make it to the NCAA tournament,” Moss said. “The culture within our team this year is something special so I’m super excited to see what we can do as a team during conference play.”