The Daily Nexus
Sign of the Times
Remember Quarantine? Maybe You Should.
July 13, 2021 at 9:00 am by Emilie Risha 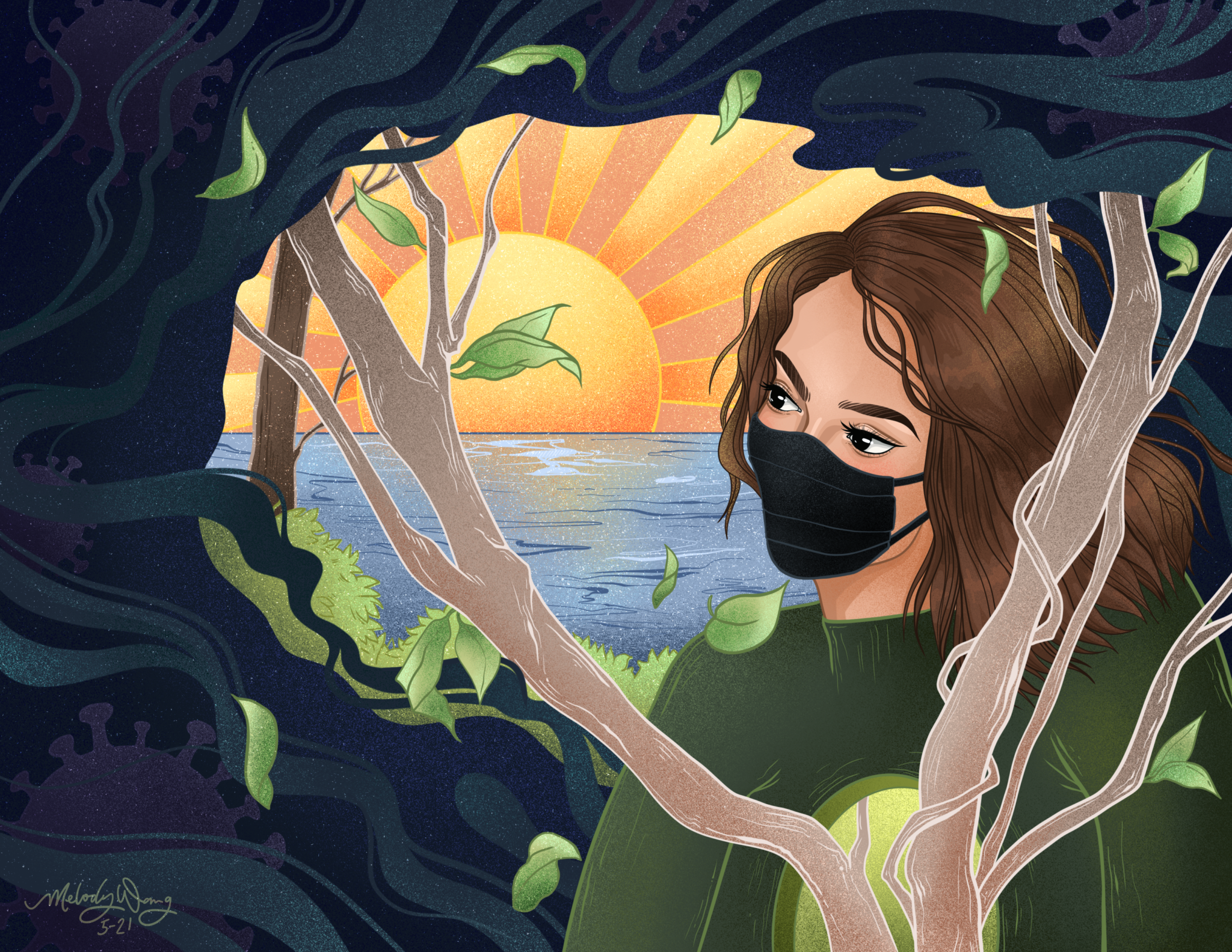 Remember quarantine? Remember those months spent waiting, questioning and being confused as to what is going on, what we’re supposed to do and when and how it would all end? An unexpected two weeks off has become a year and a half, and in what was simultaneously an instant and an eternity, masking and distancing are still very much a part of our lives with major restrictions lifted but life still being threatened by new variants. The uncertainty inherent to this pandemic confounded the woes — how could we count on a future when we didn’t even know about the present? But while those rolling months may have felt like unparalleled loss, there was gain, and there was growth.

March 2020 was the month of increasing cancellations — no more in-person school, jobs, sports, clubs, hobbies and parties. However, individual existence continued without these external markers, and new activities were created to occupy time. Sourdough, whipped coffee, Gal Gadot’s “Imagine,” banana bread, embroidery, Chloe Ting, binge watching and endless scrolling — those first few months of quarantine ached with uncertainty as much as they bulged with content.

As cases continued to rise and quarantine extended into the summer of 2020, we had to accept that the time we’d lost would not return, while “normal” was still a long way off. A government in denial worsened the debilitating effects of physical isolation from friends and loved ones, as it neither provided support for an overwhelmed health care system nor assuaged national uncertainty. Americans were left to grapple with a fragmented world on their own terms. Backed by distrust, the summer also saw community calls for justice over the murders of George Floyd, Breonna Taylor, Ahmaud Arbery and the systemic racism of American policing. Present outcomes of this “racial reckoning” include the conviction of Floyd’s murderer, “Breonna’s Law,” three indictments for the shooting of Arbery and the repealing of Georgia’s citizen’s arrest statute; despite these responses, crimes against Black bodies have continued and systemic racism abouds. In the form of racist rhetoric, our institution also failed once again by fueling hate and violence against AAPI individuals and communities.

Day-to-day losses coupled with the harm of negligent institutions provided a unique opportunity for questioning, and from that, growth.

For those not at risk of severe symptoms or death if they were to contract COVID-19, obeying restrictions was not about ensuring their personal safety as much as protecting others. Masking, distancing, sanitizing and staying home called for healthy young college students to practice empathy and selflessness, asking them to put what is said to be the greatest and most active time of their lives on hold.

But privilege is operating, even when no one wears a mask. And it is a performance to assume and embody otherwise.

Before the pandemic, it had been easier for those in privileged situations to ignore inequality. One continued with their life, as they had always done. However, the pandemic-induced disruption of life allowed those in positions of privilege to no longer ignore the world around them. One small example is dining in a restaurant. The diner goes sans-mask and uses their bare hands on food, while the waiter must sweat behind multiple masks, a protective face shield and a pair of latex gloves. This physical display of that inequality is a marker of disproportionate privilege. In times of normalcy when both parties are unmasked and smiling, one can easily assume that there is not a difference in privilege here. In fact it is a privilege to ignore inequality, to pretend that it is not operating.

But privilege is operating, even when no one wears a mask. And it is a performance to assume and embody otherwise. The pandemic-induced physical markers of difference invalidated the privileged assumption of equality, and in that exposed the whole experience of dining as a performance.

In tandem with elements of life being exposed as performative, the sudden stop of everything made visible the importance of self-direction. With online classes, no longer could a quick interjection be made in lecture to clarify a question. Instead, minor confusions remained unanswered, not worth the disproportionate amount of work it would take to clarify an unworthy supporting detail. With no classmates around to motivate studying and no club meetings or social events to make you get off your phone, motivation became an elusive entity. The elimination of all these external factors brought the focus to oneself: Nothing will happen unless you make it happen.

And maybe it will always be like this — maybe for the rest of time nothing will happen unless the individual makes it so. And that is a scary thought, a scary but powerful one.

With the CDC releasing restrictions for fully vaccinated people and the announcement of UCSB’s fall reopening plans, the “normal” for which we so desperately longed throughout this confounding year is now in sight. No longer a far-off hope, the return to the life we knew in pre-March 2020 has become an increasingly actualized reality. It’s happening, and for most of us, “normal” can’t come soon enough.

The shutdown of normal life, the economic fallout and the increasingly publicized instances of racial injustice exposed institutions and clued us into just how much of life was a performance.

But as we inch closer to resuming what was normal, we leap miles ahead toward forgetting what wasn’t.

Just as it was a privilege to ignore the pandemic, it will be a privilege to forget it. COVID-19 is still dramatically seizing lives and jobs. Far from being “the great equalizer,” the pandemic and its effects were and still are widening inequality, both internationally and within the U.S. The shutdown of normal life, the economic fallout and the increasingly publicized instances of racial injustice exposed institutions and clued us into just how much of life was a performance.

So as you watch the U.S. vaccine distribution percentages climb higher and ditch your mask for a vaccination card, remember quarantine — remember the institutional mistrust and the self-reliance that you (hopefully) gained from this major historical event. Faced with the return to normal, it will be easy to indulge in the pleasures for which we all waited so long and start to love again the things we were shown to question. But inequality exists, privilege exists, things take work and things take time, and if you really want something to happen, only you can do it.

Emilie Risha is struggling with the whole self-motivated part, but the completion of this article sparks hope that anything is possible.