The Daily Nexus
Sign of the Times
“Cruella” Offers Another Iconic Example of Disney’s Failed LGBTQ Representation
July 8, 2021 at 9:00 am by Katie Caracciolo 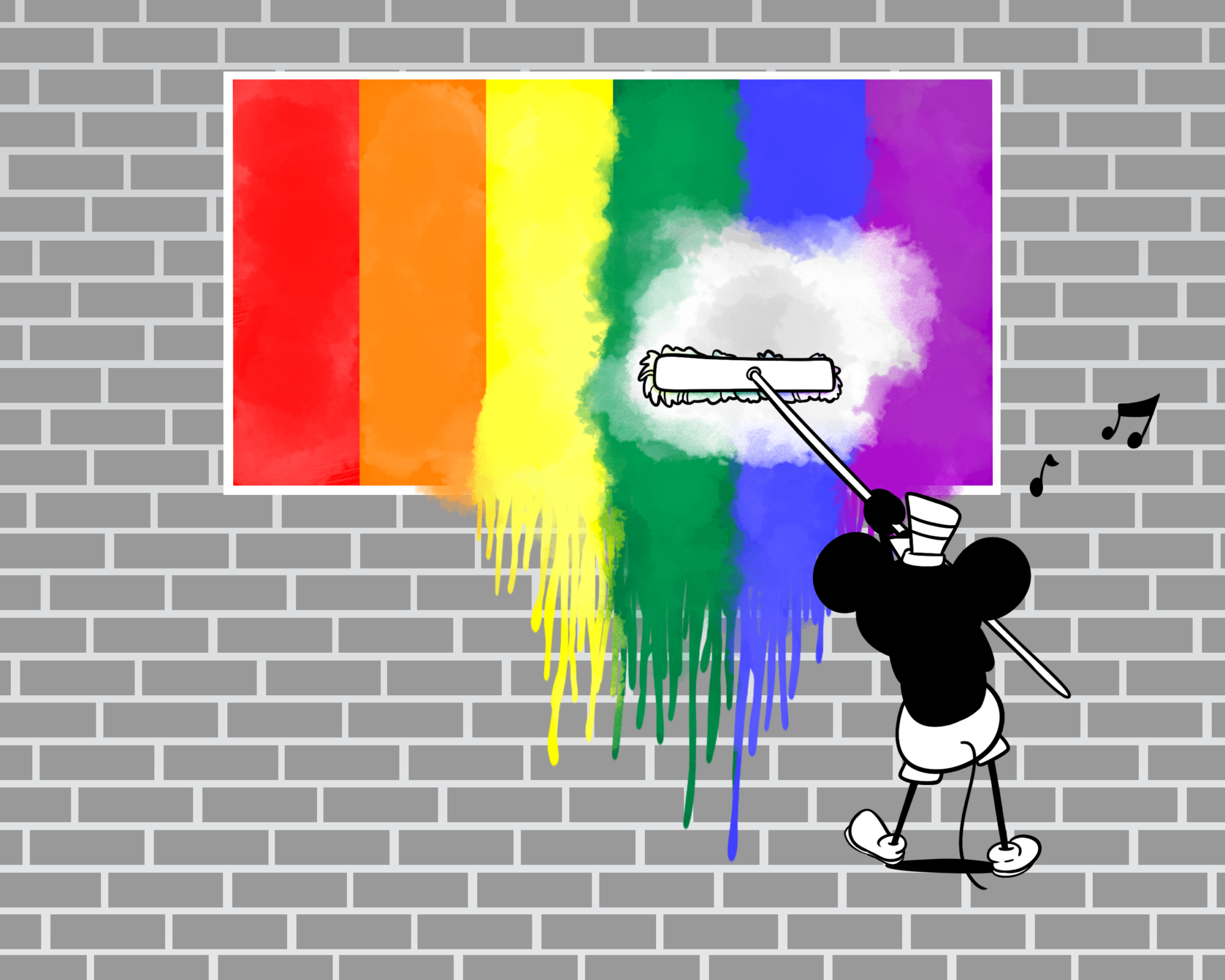 Responding to rumors that “‘Cruella [Is] Blessing Us With Disney’s First Major Gay Character,” PRIDE writer Raffy Ermac heartbreakingly reflects that, “considering how long Disney fanatics have been waiting for actual, meaningful LGBTQ+ representation in a major Disney title, this news is extremely welcome!”

Having been burned before, I did not get my hopes up. And, indeed, as I watched this film, I did not see any textual confirmation that Artie is queer, aside from stereotypical presentations such as wearing makeup and flamboyant clothes and working in the fashion industry. As Katie Rife of the AV Club is apt to point out, “plenty of straight people dressed like Marc Bolan in 1975, too,” and such stereotypes do not automatically make a man gay.

It is disingenuous, however, for Disney to claim that this parade of “first gays” in the form of minor characters in live-action remakes, such as Artie or LeFou in 2017’s “Beauty and the Beast,” is its first foray into LGBTQ representation, good or otherwise. For decades, particularly during the “Disney Renaissance era,”  the company borrowed campy, stereotypical traits of gay men and women in order to add a little … spice to their villains.

With a proliferation of “sissy” male villains ranging from a cowardly, fratricidal lion to a sassy, dress-wearing God of Death to a bodybuilding “ladies’ man” who uses antlers in all of his decorating, Disney did not hold back on using queercoding in order to “create a psychological association in people’s minds (particularly children’s) between ‘queer’ and ‘evil,’” according to an article from The Tempest.

Since we, as a media-consuming society, have (presumably) moved past the villification of queer identities, this means that we should be seeing from Disney queer heroes who are the driving forces of their own stories, right?

As YouTuber Lindsay Ellis pointed out, Ursula is famously based off of drag queen Divine, validating the interpretation of “Poor Unfortunate Souls” as an epic, underwater drag performance. However, composer Howard Ashman, an out gay man, “would’ve been steeped in New York drag culture” and“writing what he knows,” rather than weaponizing queer identities to villify those who break the gender binary, Ellis said. But would kids and parents watching the film in 1989 really recognize all that nuance?

Though these films undoubtedly tarnish the associations that straight audiences raised on Disney films make with queer people they meet in real life, they are time and time again, unfortunately, the best and most memorable part of every single movie they appear in.

In the case of villanous LGBTQ representation, all press may not be good press, but it at least affords queer audiences the opportunity to see, perhaps, some aspect of themselves and their experiences onscreen. Since we, as a media-consuming society, have (presumably) moved past the villification of queer identities, this means that we should be seeing from Disney queer heroes who are the driving forces of their own stories, right? According to Disney, wrong. Instead, they offer up less-than-half-hearted attempts at shoehorning gay moments, not characters, into their superhero, space opera blockbusters.

Presumably attempting to correct (without truly fixing) their poor track record of onscreen LGBTQ representation, 2019’s “Star Wars: The Rise of Skywalker” featured a brief kiss between two women in the background of a scene (which was cut from the version released in Singapore), and “Avengers: Endgame,” which premiered in the same year, included a scene of a man (played by director Joe Russo) in a support group mentioning a date he went on with another man after the “Blip.” These moments, however, lack the depth or pure screentime that queer audiences deserve, or even became accustomed to with Renaissance-era villains.

In an interview with Deadline on the “First Openly Gay Character In Marvel” history, Russo was (hilariously, infuriatingly) quoted as saying, “Representation is really important … It was important to us as we did four of these films, we wanted a gay character somewhere in them … It is a perfect time, because one of the things that is compelling about the Marvel Universe moving forward is its focus on diversity.”

But no, Mr. Russo, inserting yourself to deliver a throwaway line hinting at a character’s same-sex attraction does not count as diversity. Gay extras do not count as gay characters. If “everyone has the right to see themselves on the screen and identify somewhere,” wouldn’t it be so much more powerful if LGBTQ audiences could identify with your heroes, and not just your clownish self-insert?

As Vanity Fair writer K. Austin Collins said, “ … these inclusions reflect attitudes: They reflect a Disney that’s finally willing to let two people of the same-sex kiss — or, in the Endgame case, refer to each other as partners. And in the same moment, they reflect how far Disney is, or isn’t, willing to go. About two seconds, in one movie. A throwaway line in the other.”

Though campy Disney villains and queerbait-y action heroes are not and should not be the end-all, be-all of the corporation’s queer representation, these big characters occupying big moments and spaces onscreen make far more of an impact than two-second snippets of maybe-gay side characters and extras. Since Cruella is already queercoded, Finn and Poe Dameron already seem to be in love and Steve Rogers and Bucky Barnes had the makings of becoming one of the greatest, time-defying love stories of modern cinema … audiences do not need these background characters if they could have these protagonists instead. But for some unstated reason, we cannot. Dameron actor Oscar Isaac put it best when he said, regarding a possible romantic relationship between his own character and John Boyega’s character Finn,  “ … it’s a time when people are too afraid, I think, of… I don’t know what.”

The Disney corporation has become the butt of a running joke on social media for its repeated failed attempts at LGBTQ representation, and GLAAD’s 2020 study labeled Walt Disney Studios as “Poor” for its depictions of LGBTQ characters in film. This, my dear friends, is not even representation. It’s marketing.

Disney does not intend for these moments to appeal to queer audiences, but rather to the lining of “progressive” Hollywood execs’ pockets.

Disney does not intend for these moments to appeal to queer audiences, but rather to the lining of “progressive” Hollywood execs’ pockets. They exist so that Walt Disney only has to roll oh-so-gently in his grave. It’s so the Russo brothers can give each other a warm pat on the back, then return to churning out painfully heteronormative products. It is below the bare minimum. It is the fictional equivalent of Converse selling rainbow shoes for Pride month.

Queer people deserve to see themselves as major, explicitly “out” players on screen. Queer people are doctors, teachers, lawyers, parents, and lovers, and their queerness does not detract from their stories. The Walt Disney Company, however, invariably treats queer identity as such.

Katie Caracciolo is attempting to overcome two decades of brainwashing at the hands of the “House of Mouse.”