The Daily Nexus
Sign of the Times
A Comprehensive Guide to Big Media’s Queerbaiting Crimes
June 18, 2021 at 9:41 am by Katie Caracciolo 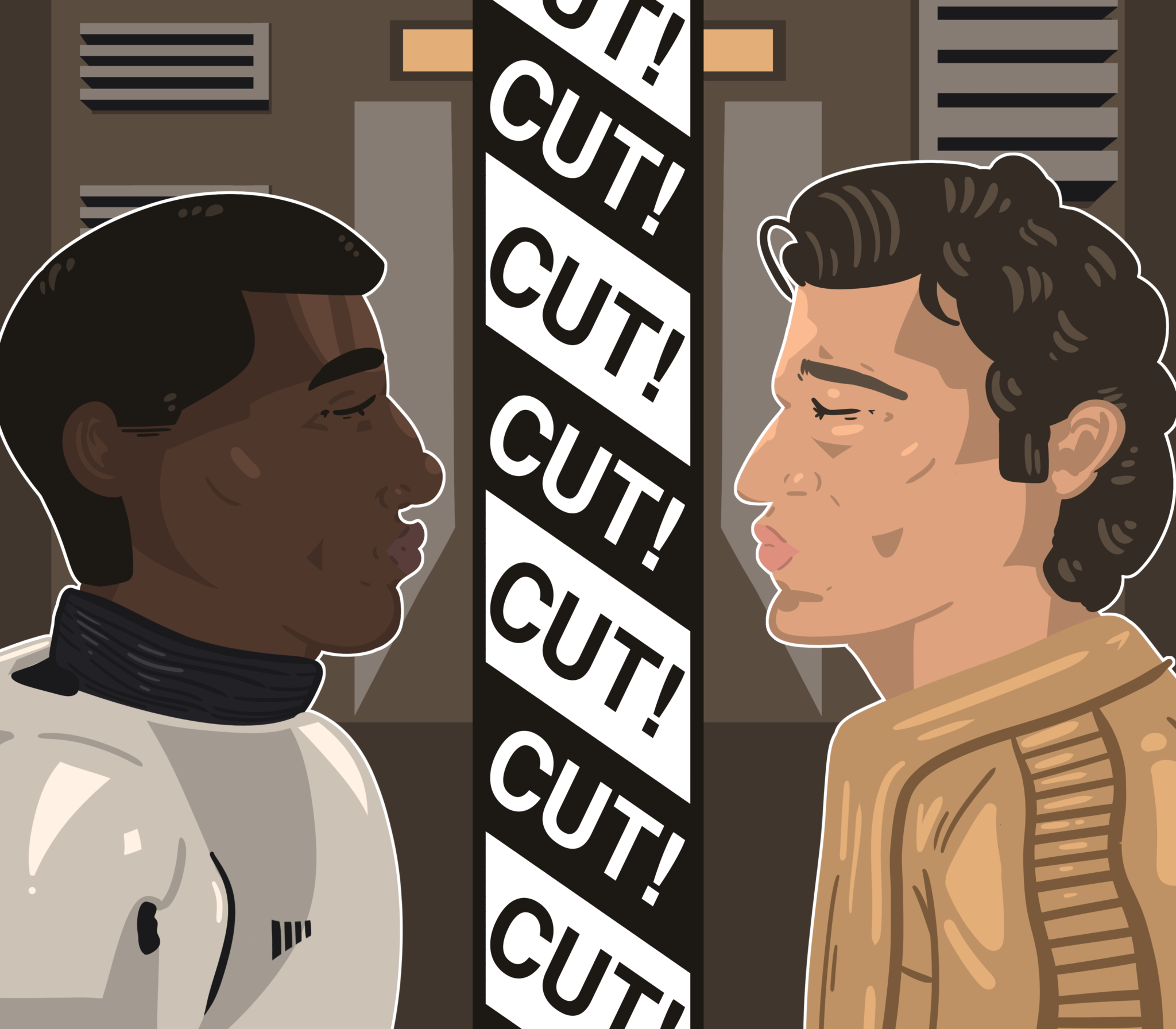 As a film major living through the tail end of a pandemic, I spend a lot (a lot) of my waking hours consuming pieces of media of varying levels of quality. What has stood out to me in this year of intense media consumption is how few people in film and television are gay. As far as I can tell, many queer people exist in real life, although countless writers, directors and producers would like to keep this a secret. At other times, however, they give us the Schrödinger’s cat of queer representation: queerbaiting!

Here are my top three queerbaits of recent memory and why they stink.

Due to actors John Boyega and Oscar Isaac’s undeniable chemistry, as well as the pair’s name-giving parallels with the following year’s “Moonlight,” many people, gay and straight alike, went into “The Last Jedi” with foolishly high hopes. But, predictably, we all went home with a bitter taste in our mouths, for instead of seizing the opportunity to make history with a universe-defying, narratively satisfying, gay love story between a Black and Latinx man, they transformed these men into a spurned incel and a drug runner.

The “Stormpilot” fiasco proves that good actors get queerbaited. It is a necessity of honest performance. Isaac himself said of Finn and Poe’s relationship, “Personally, I kind of hoped and wished that maybe that would’ve been taken further in the other films, but I don’t have control … It seemed like a natural progression, but sadly enough it’s a time when people are too afraid, I think, of … I don’t know what. But if they would’ve been boyfriends, that would have been fun.” If a Golden Globe-nominated actor thought the characters were gay, then maybe they were, but Disney simply decided the story was not worth the financial risk to tell.

J.J. Abrams, on the other hand, “argued that Finn and Poe’s relationship is ‘a far deeper one than a romantic one … It is a deep bond that these two have, not just because of the trial by fire in which they met, but also because of their willingness to be as intimate as they are, as afraid as they are, as unsure as they are, and still be bold, and still be daring and brave,’” as if being an out and proud queer man in space is any less brave than being forced upon a female love interest.

Despite the fact that he claims, “In the case of the LGBTQ community, it was important to [him] that people who go to see this movie feel that they’re being represented in the film,” Abrams has nothing to be proud of. GLAAD’s 2020 study on LGBTQ representation in media also found that “in 2019 [the year of “Rise of Skywalker”’s release], just 34 percent of LGBTQ characters were people of color (17 of 50), down from 42 percent in the previous report and a decrease of twenty-three percentage points from the 57 percent of LGBTQ characters of color in 2017.” Abrams and Disney as a whole squandered the opportunity to be part of the solution and instead knowingly chose to be part of the problem.

So, Sam Wilson and Bucky Barnes did not kiss. I did not think they would kiss, but somewhere deep down I had hoped that the mega-corporation churning out Marvel properties would take pity on my soul and speak truth to the emotional intimacy of these characters. That they might open their eyes and see that not only could this be an important story to tell, but that it might also be a solid marketing opportunity. Gay Pride Winter Soldier merch when? I understand the moral minefield of turning one of superhero cinema’s most famous war criminals into an LGBTQ icon, but that’s diversity, babe. However, they didn’t, and I cannot be surprised, for I have come to expect nothing less, nothing more than subtext. Always subtext. Cruel, exploitative subtext.

Writers, directors and producers of high-profile media properties repeatedly reiterate their commitment to diversity and inclusion, then fail to deliver on almost every front. The sickest part is that I hold out hope.

As io9 editor James Whitbrook wrote about the show,  “one thing that’s been clear throughout is that the series wants to sell the chemistry of Anthony Mackie and Sebastian Stan’s titular heroes as not just teammates, but goofy, occasionally homoerotically-charged buddy cop pals … Sam and Bucky rolling together in the fields just outside of Munich after their scrap with the Flag Smashers is played as a quick gag, as is Doctor Raynor’s impromptu (and intimate) therapy technique between the two afterward, albeit one that opens up a level of reflection for Bucky unlike anything else in his treatment in the show so far.”

This, contrasted with a comment on the article outright denying these scenes’ homoerotic subtext illustrates an interesting point: These cues are easy enough for straight audiences to disregard but blatant enough to be obvious to anyone looking for them. The art of the queerbait, then, is to signal to queer audiences that you might be on their side, without losing the attention of the homophobes that Disney holds so near and dear to their pocketbook.

Marvel’s queerbaits are so uniquely nefarious, for they treat queer audiences as worthy of consuming their product, of giving them 12 dollars per month for scraps, but not worthy of seeing themselves onscreen. Despite Joe Russo’s claims of wanting more diversity in Marvel properties, despite the source comics containing many rich examples of LGBTQ characters, the company still refuses to have a queer lead character in its big and small screen adaptations.

This is the crème de la crème of queerbaiting. A 12-year long-con, in which all parties involved continually denied the possibility of even a hint of reciprocal romantic feeling, even when the two actors in question won a Teen Choice Award for Choice TV Chemistry.

The characters’ “profound bond” (the show’s words) became clearer and clearer over the show’s 15 seasons, with highlights including Dean more than once mourning Castiel’s death like he “had lost a spouse or something,” Castiel defying the orders of the Abrahamic God to defend Dean and “Castiel [managing] to fight off mind control because of his love for Dean, who motivated this feeling out of Castiel by reminding him of their relationship.”

Moments like these, culminating in the greatest no-homo love story of all time, have sparked Reddit debates regarding the Dean Winchester’s apparent bisexuality, alongside countless YouTube compilations of homoerotic moments from the show. The epic highs and lows of the pinnacle of queerbaiting.

Similarly to the “Star Wars” franchise, the CW missed the opportunity to offer acknowledgement to a sorely underrepresented demographic in television: bisexual men. According to GLAAD’s “Where We Are On TV 2020-2021 Report,” “in the 2020-21 season, bisexual+ characters make up 28 percent of all LGBTQ characters on all three platforms [Amazon, Hulu and Netflix], a two-percentage increase from last year. These numbers still lean toward women, with 65 women and 33 men, and one character who is non-binary.”

The showrunners of the longest-running North American sci-fi series of all time had the opportunity to change these statistics but pulled back at the last moment by making their most popular ship canon, then never bringing it up again. In this particular missed opportunity, they had the chance to change the narrative of the all-American, man’s man archetype to include a healthy dose of bisexuality, as it truly should but chose instead to appease the naysayers by leaving Dean’s feelings on the matter undisclosed.

Writers, directors and producers of high-profile media properties repeatedly reiterate their commitment to diversity and inclusion, then fail to deliver on almost every front. The sickest part is that I hold out hope. I wait anxiously each week to see tweets about Bucky and Sam’s relationship status in the latest episode of “Falcon and the Winter Soldier.” I check Tumblr for the newest translation of the “Supernatural” finale, wanting to see the romance made explicit just one more time.

As much as we may wish for things to be different, Disney and similar major media corporations hold immense power in their choice to represent, ignore or bait LGBTQ audiences. They are what they own, and until a major media company has the guts to invest time and resources into a well-told queer story, I will pick up pennies, I will twist the author’s intent, I will take the scraps they throw to queer audiences and hope for a future where queer audiences aren’t forced to fall for queerbaits hook, line and sinker.

Katie Caracciolo has thought about this, and only this, for the past six months.

so true of you bff, speak your truth