The Daily Nexus
Events
NIKI And Dominic Fike Headline Extravaganza 2021
May 18, 2021 at 9:29 pm by Sunidhi Sridhar

Budding R&B songstress NIKI and Floridian indie-rap star Dominic Fike took the stage for the second night of this year’s Extravaganza concert on Sunday, May 16, as they performed and answered student-submitted questions, and had some pressing inquiries of their own. (Why is our school mascot a Gaucho? Isn’t that culturally insensitive? Dominic Fike wants to know.) 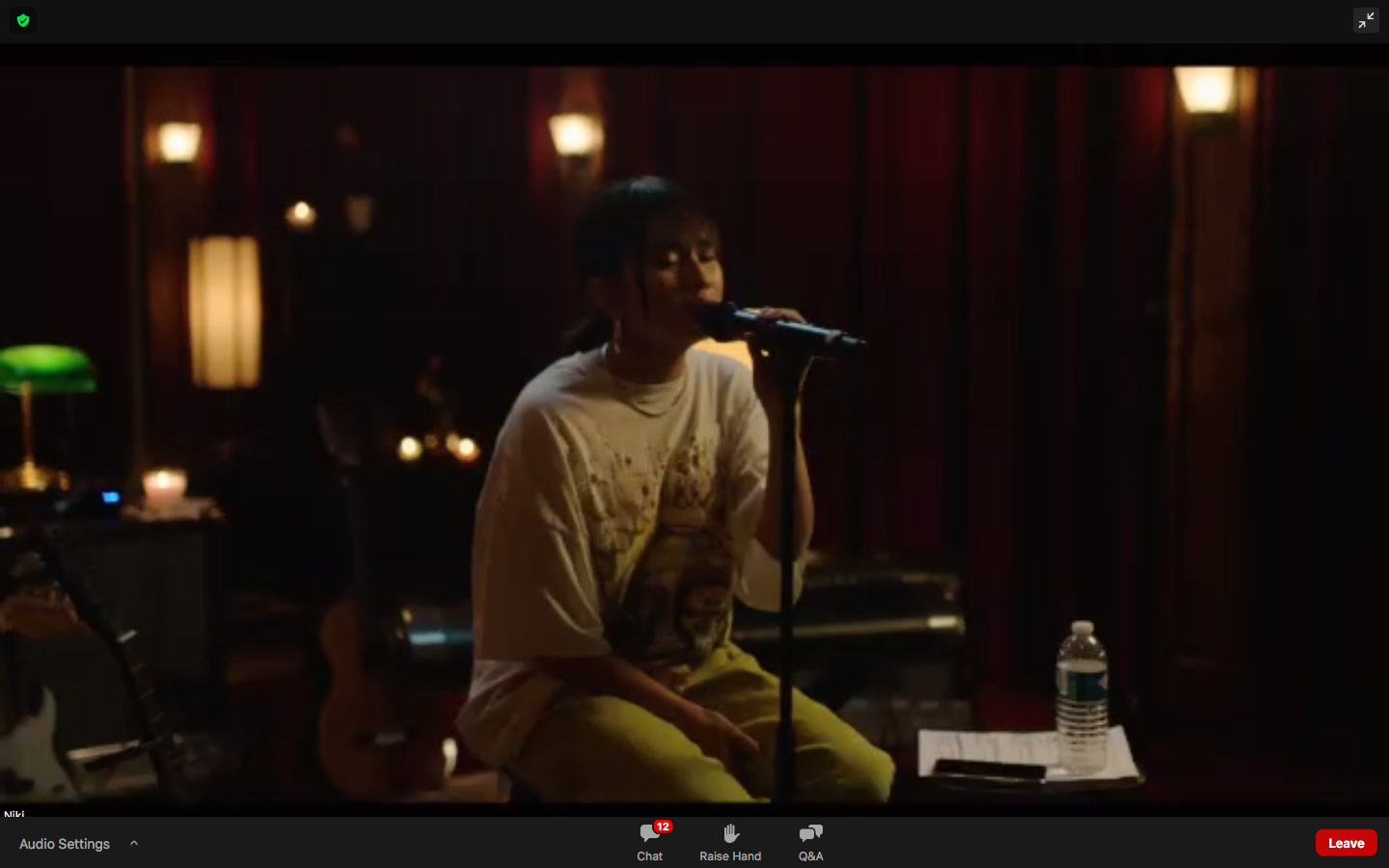 Appearing on camera in a stylish and impeccably-accessorized ensemble, NIKI, a 22-year-old Jakarta native, kicked off the first half of the show with a synth-heavy track from her 2020 debut album, “Moonchild,” called “Switchblade,” a melodic pop song about her flourishing career and making her own luck in the world.

Instead of waiting until the end of her setlist to interact with the audience, NIKI took questions from fans after the end of almost every song, adding that she was “really bummed” to not be able to perform live and see everyone’s faces.

The 88rising signee opened her Q&A with a series of hot takes and controversial opinions, revealing that she would most likely study psychology as a UC Santa Barbara student even though she found the subject to be “basic” (“I just called out every psychology major ever!”) and proclaiming that she had finally come to terms with the fact that “pancakes are just too soggy and [she] can never finish them no matter what the fixings are.”

Returning to the microphone for an emotional rendition of “Lose,” a stirring piano serenade about a volatile relationship, NIKI then reached deeper into her discography to perform “urs,” an acoustic-driven number from her 2019 EP “wanna take this downtown?” and “still one of [her] favorite tunes that [she] ever wrote.”

The “Indigo” singer continued to answer questions throughout the night, endorsing the baggy clothing aesthetic as the fashion trend of the moment and deciding on “Jacquelyn” as the ideal name for a boat (“The name just sounds really expensive to me”).

NIKI closed out her set with a stripped-down production of “La La Lost You,” a two-in-one ode to a past lover and Los Angeles nights, and “lowkey,” a sleek and romantic record, before signing off with a kiss. 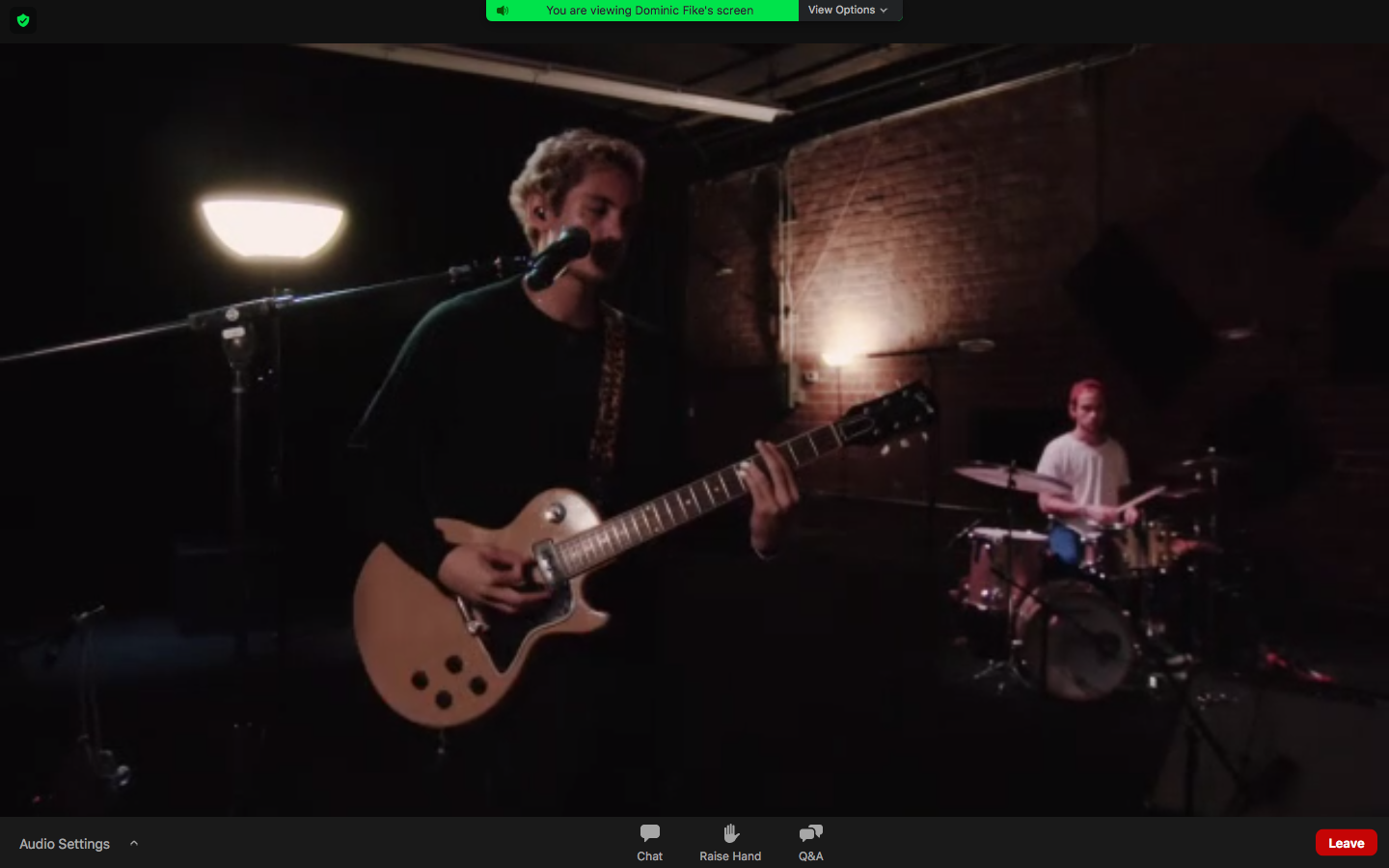 Following a brief intermission, the cameras refocused on a dimly lit space with exposed brick walls as Fike materialized on-screen singing “The Kiss of Venus,” a reinvented cover of the original ballad by legendary Beatles member Paul McCartney.

The 25-year-old songwriter, whose breakout hit “3 Nights” has been certified platinum by the Recording Industry Association of America, introduced his band and encouraged the audience to settle in with “snacks, soda pop, cigarettes” before performing the Kenny Beats-assisted “Phone Numbers,” a pop-rap song about Fike’s unexpected rise to stardom.

He then transitioned into an explosive rendition of “Babydoll,” a rock-n-roll-inspired love anthem, and “Westcoast Collective,” a nostalgic record about his childhood, both tracks from his 2018 EP “Don’t Forget About Me, Demos.”

After closing out the songs with a self-affirming “Sheeeeeesh!,” the latest in slang that TikTok has bestowed upon Gen-Z, Fike told the audience that he is trying to get better at using the social media app.  “Follow me on TikTok at @chillguymike, that’s my real burner account,” he added (This claim is yet to be verified).

The singer, who first garnered attention within the music industry after uploading demos to SoundCloud in 2017, jumped right back in with a fiery mashup of “Superstar Sh*t” and “Why,” two songs from his 2020 debut project “What Could Possibly Go Wrong?,” while his raspy vocals amplified over the percussive instrumentals.

After taking a moment to do a power stance, a trick that he had heard about in an interview with the Foo Fighters, Fike pulled out a couple of tracks from his back catalog, “Falling Asleep” and “Batshit,” revealing that he wrote both of the songs in his bedroom five years ago.

“Thank you for having me, UC Santa Barbara,” he cut in as he adjusted his microphone and fixed his guitar strap. “We’ll talk about the name of the mascot and see if we can change it,” he added, “because what’s up with that? We’ll talk about whether or not that’s racist after the show.”

Fike wrapped up his appearance backstage where he was joined by A.S. Program Board Special Events Assistant Kim Kryshak for a virtual Q&A session.

A guitarist since he was ten years old, Fike said that he has been practicing the trumpet and the piano during quarantine and that he plans to work those sounds into his next release.

“I usually start with one instrument and I’ll find a little melody. I feel like I’m really good at melodies and I always keep building on the notes until I sit back and listen and I’m like, ‘Wow! I just made this genre,’ so yeah, I’ve just been playing around with stuff.”

He added that, when he was starting out as a rapper, he would focus on the lyrics before the accompaniment, but his approach has since shifted. “Now, I’ll mumble gibberish until the words fit in there, you know?”

Fike, like every other musician whose live gigs came to a crashing halt a year ago, is eager to hit the road again and perform new songs, citing New Zealand as one of his most-anticipated stops.

“They moshed to my song ‘Socks’ [in New Zealand]. They just go crazy over anything because not a lot of people come through.”

Of course, the “Açaí Bowl” singer couldn’t log out without getting some answers about the school’s controversial mascot. Upon being informed that the word “gauchos” refers to the nomadic horsemen of the South American pampas, Fike managed to squeeze out a well-intentioned yet decidedly lukewarm “Go Gauchos!”