The Daily Nexus
Opinion
Argument in the Office: Warning, This Article Contains Spoilers!
May 18, 2021 at 9:00 am by Christine Tu and Toni Shindler-Ruberg

Shortly after the beginning of the pandemic, I found myself with a wealth of free time and with no particularly demanding obligations. Instead of perhaps, putting that time to good use and being a productive member of society, I used that time to trawl through the multitude of streaming sites in my arsenal: Amazon Prime Video, Netflix and, sometimes, 123movies.net (jk lol).

Within a couple of months, I finished rewatching all my old favorite shows, binging quickly through “Downton Abbey”, “Parks and Recreation”and “Psych”. It was a lovely time, reliving perfect endings, heart-stopping twists and old characters I might have had a crush on when I was younger. But pretty soon, I was faced with the modern-day great unknown: hundreds, if not thousands, of unwatched TV shows and movies with limitless potential.

Searching through the endless scroll of shows and movies was like scrolling through the TikTok explore page: a couple seconds of watching with mild interest before clicking onto the next thing. Though, in the case of streaming movies and TV, I’d end up quickly searching Wikipedia for spoilers before moving on to the next show.

And let’s be real, we’ve all been there. You get five minutes into that movie that has that actor from that other movie you like, then get bored and decide to search the internet for the ending so you can determine whether the rest of the thing is worth watching.

But don’t do it! I don’t pretend to be a cinephile or any expert on movies; I’m just your average viewer. I can tell you only this: Though the urge to read the ending of a movie can be stronger than Flamin’ Hot Cheetos cravings (the strongest emotion known to humankind, of course), in the long term, it can ruin  your viewing experience to the point where you might as well save money on your streaming subscriptions and spend all your time on Wikipedia, reading the endings to all movies like a barbarian.

Obviously, reading the ending ruins the plot, especially for movies and shows with twists at the end (basically all of them). Sure, the ubiquity of quick laughs in short videos has significantly reduced our attention spans from what they used to be and thus, increased our urges to read spoilers, but studies have shown that longer movies get better reviews, likely because audiences find the endings more satisfying overall. And also, to have the audience read the ending before the movie’s even really started isn’t the reason why that multimillion dollar movie was produced, not to mention why the masterminds behind it spent hundreds of hours writing and producing the movie in question.

I think Jennifer Richler from The Atlantic explains best why spoilers suck: “They remind us that a story is just a story. It’s hard to get transported when you already know where you’ll end up — in real life you don’t have that knowledge.”

Then weigh the tradeoff of spoilers economically: Does the initial rush of satisfaction you get from reading the ending outweigh the cost of losing potential satisfaction you get at the end. Likely not. I’ve noticed that the shows and movies that I truly come to enjoy involve me sitting through the whole thing and avoiding the urge to search up the ending. And don’t get me started on reading the endings of movies you pay to see. If you’re sitting in the dark movie theatre, reading the ending on your phone to a movie you paid $10 or more to see, you’ve got issues. Or too much money to spend, which, in that case, give me some!

On the other hand, there are some studies that suggest people enjoy stories more with spoilers. However, Thalia Goldstein, a psychology professor at Pace University points out, “the study overlooked a key fact: People only care about spoilers for stories they feel invested in, not those they’ve heard for the first time a minute earlier.”

Though, there is one kind of movie spoiler I can relate to: those who read spoilers for sinister horror movies to relieve the feeling of intense anxiety and heart-pounding terror (the kind that makes you wonder if you’re having a heart attack) in order to enjoy those movies. That can be one exception, I suppose, but I will say that I refrained from reading the spoilers to “Knives Out” (which I thought was pretty scary) and though I was definitely frightened (I think I screamed aloud at one point), the feeling of getting to the ending unscathed by spoilers was definitely worth it.

Christine Tu urges you to not read spoilers because then what’s the point? 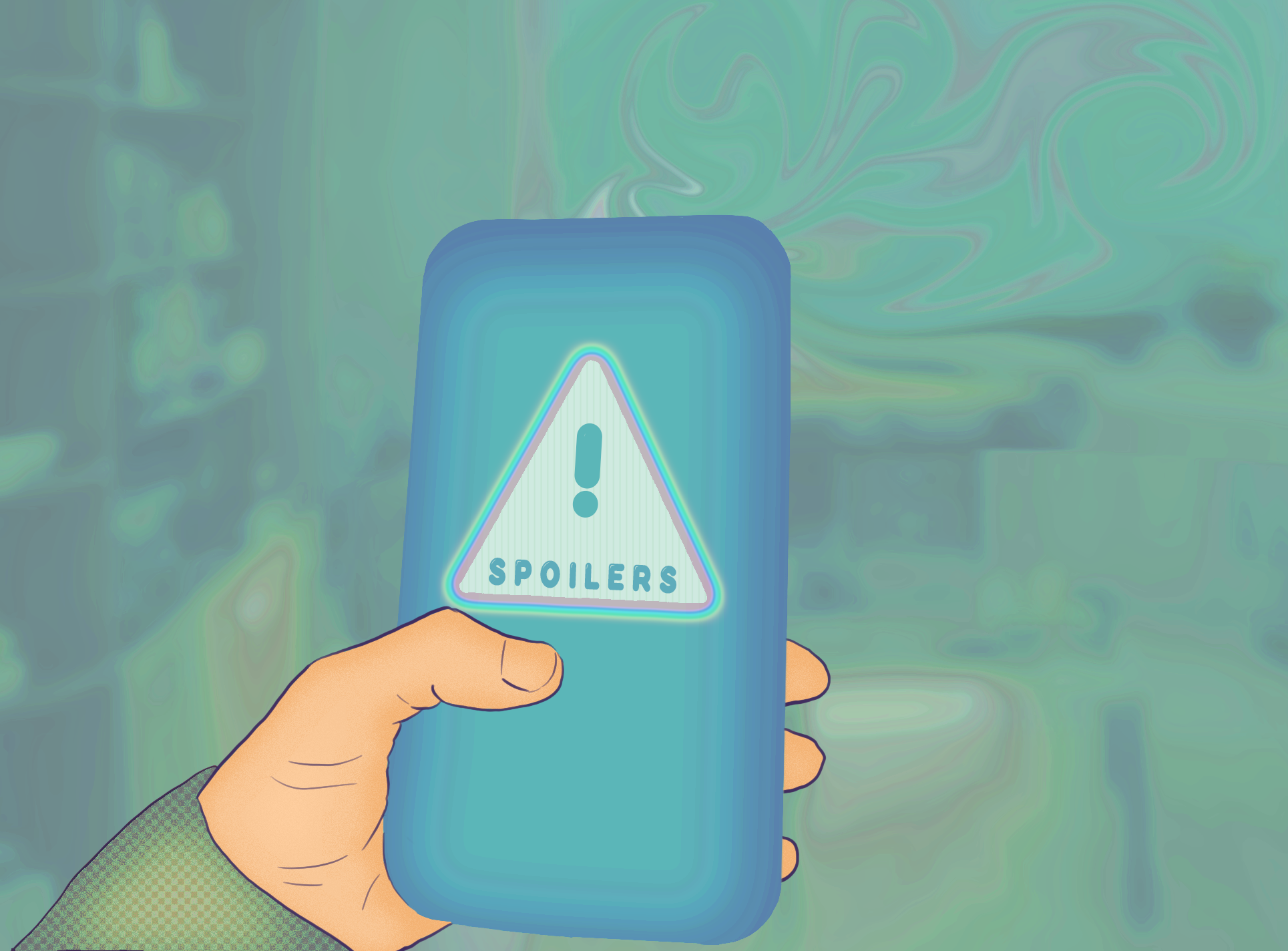 Go Ahead, Spoil It.

Toni Shindler Ruberg doesn’t want to spoil anything for you, but TLDR; Spoilers good.

Before we get started, I want to clear the air.

I usually make my guesses about characterization, plot and twists and turns, all within the first five to ten minutes of a movie. Then, out comes the phone, Google loading results for “full synopsis of [insert title here]” faster than the main character does their oh-so-quirky thing for the first time. With a quick scroll, I skim over the plot, first checking for any animal deaths or scenes that might raise personal issues. Then, I sit back and enjoy the show. Arguably more than those stumbling around in the spoilerless darkness beside me.

Spoilers aren’t the devilish pitfall advertised in popular culture, if the whole heaven/hell analogy is working for you. Spoilers can improve enjoyment, simultaneously relieve and increase tension, keep you up to date if you fall behind and warn consumers of potential personal triggers.

If you understand the general timeline or concept of a show or movie, it’s much easier to fully immerse yourself in the story. The potential positive effects of spoiler exposure could be compared to the psychological phenomenon of perceptual fluency — the increased aesthetic enjoyment of things when their (often repetitive) geometric patterns are easier to process.

You’re no longer scratching your head or giving yourself premature wrinkles from all the confused squinting; rather, your aesthetic and artistic appreciation is potentially increased. Existing predictability or hint-dropping in movies, even in infamously complicated media like “Inception”, suggests a desire for the audience to understand or uncover meaning.

An ending provides no sense of closure or suspense if you’ve spent 41 to 97 minutes with zero clue of what’s happening.

In a 2015 study, researchers Dengfeng Yan and Alex Tsang suggest that popular opinions about spoilers result in consumers overvaluing the negative contribution of a spoiler on their enjoyment. Enjoyment decreased when participants were alerted they were consuming a spoiler, rather than being made aware of the plot in a supposedly unrelated fashion.

Putting such value on spoilers is bound to lead to disappointment. No longer are you watching a movie, but you’re navigating a minefield. Paranoid avoidance of loose-lipped people or news reports to shield yourself from spoilers seems unnecessarily stressful. The disappointment of encountering a spoiler may overshadow any negative impact the spoiler has on your enjoyment of the movie.

There are seven basic plots, from which writers can branch out slightly to spice things up. But on a basic level, plots are simply amalgamations of each other, with different characters and settings. So it’s likely that you already know how a movie or show is going to turn out, even if you’re unaware of it.

The genre drops hints and potentially spoils itself. Mystery or suspense? Expect some cliffhangers, one or two shock reveals (!!), a scapegoat and the real villain — you’ve probably seen them before — revealed right at the end. Add in a dramatic reuniting or a ‘surprise’ death — it will be an audience favorite or somebody close to the protagonist — and boom, movie done.

The dramatic irony of knowing a character is moments away from death can increase tension. Giving the audience suspenseful insider knowledge is a common dramatic tool in a writer’s kit.

Imagine this: You’re sitting on the couch as that (stupid) character goes into the forest themselves, knowing a chainsaw wielding psycho is right around the next tree, but there’s no way to warn them … Even knowing what’s about to happen, you could still cut the tension with a knife — or a chainsaw.

Not to mention — well, I suppose I’m mentioning it now — our habits of rewatching. Die-hard classics like “Romeo and Juliet,” “Titanic,” “Die Hard” or almost any old slasher movie are classics for a reason — their watchability and enduring entertainment. I’m currently on my third cycle of “Community,” a sitcom whose easily bingeable content hides enough Easter eggs within its chaotic twists and turns to enjoy on repeat. With each consecutive watch, you can uncover new jokes and develop new interpretations or theories.

And in the most dire of circumstances, spoilers can be used for sheer convenience. Although we are spending more and more time indoors in near proximity to our televisions, other responsibilities and tasks may demand our attention over the latest installment in a saga-rific series. Instead of withdrawing from your friends and locking all electronics away until you have time to watch the latest episode just skim the most recent synopsis and go on your merry way.

I admit, there are a few marked exceptions to spoilers that I shall briefly outline here: Reality competition shows, think “Survivor” or “The Bachelor”. Yes, I’ve joined the dark side. If you spoil reality television, you’re dead to me. They’re far from artistic, so enjoyment is well and truly linked to the basic facts of what happens.

Some argue that spoilers are “cheating,” somehow taking something away from the consumer. But art and enjoyment of art and stories should not be purposefully restricted. Besides, the majority of spoilers aren’t full-length analyses, nor do they take personal experience into account. Knowing the plot simply aids in personal interpretation, analysis and the potential opportunity to nerd out about the aesthetic presentation, if so desired.

If reading spoilers helps somebody understand and process, therefore enjoying the movie or book more, who are we to take that away from them?

You don’t have to read spoilers if you don’t want to. But true artistic mastery comes not from the plot itself, but how the story is presented. Spoilers or not, a truly great novel, television series or movie holds up after the first pass, stunning and engaging its audience time and again.

Toni Shindler-Ruberg
Toni Shindler-Ruberg is the Assistant Opinion Editor. She is an English and Psychological & Brain Sciences double major with a passion for antique knife restoration videos and looking at pictures of ducks wearing mini cowboy hats.