The Daily Nexus
Opinion
Argument in the Office: The Book to Movie Pipeline
May 13, 2021 at 9:00 am by Mikayla Buhbe and Maya Salem

Exceptions to the Rule: Some Movies Are Better Than the Books

Let’s be clear: I was just as upset about the 2010 “Percy Jackson & The Olympians: The Lightning Thief” movie as everyone else was. I’ve been a huge book nerd for as long as I can remember, and I’ve definitely seen my fair share of bad movie adaptations. At their best, such films can fall a little flat of the original story; at their worst, they can piss off an entire generation of book fans (see “Percy Jackson” example above).

All that being said, book-based film adaptations aren’t always bad. Movies allow written stories to be transformed, and while the visuals may not always match the imaginations of original book lovers, they can shed new light on characters, conflicts and worlds by bringing them to the big screen. Furthermore, if adaptations are especially good, they can inspire the engagement of dozens of new fans and even “boost sales of their source material.” When a screenplay is treated with care, it can lift the story to higher levels of relevancy and praise than the novel ever achieved. Sometimes, the movie can in fact be better than the book it is based on.

For example, take “To All the Boys I’ve Loved Before” (TATBILB). The Netflix rom-com film was released in 2018 to widespread success and earned a stack of nominations and awards, including the Kids’ Choice Award for Favorite Movie Actor and the MTV Movie Award for Best Kiss. The original 2014 book by Jenny Han was no stranger to critical acclaim, but it was also targeted at a specific audience: teen romance readers. The prose is relatively simple and direct, and the story, while chock-full of juicy ups and downs, is a little slow on the pacing side in order to accommodate the drama. None of those factors make it a bad book, just one that is aimed at a certain type of reader with a certain level of complexity in mind.

When “TATBILB” was adapted into a Netflix movie, the story evolved from a middle grade romance into a film with a focused plot, beautiful cinematography and electric chemistry between actors, all of which was achieved while still maintaining the core message of the book. This transition also opened up the story to a wider audience. Even if high school love stories aren’t your preferred genre, anyone can appreciate the craft of the movie itself. When you put all of the pieces together, Netflix’s adaptation of “To All the Boys I’ve Loved Before” isn’t just a good teen rom-com — it’s a good movie.

A similar case can be made for larger scale adaptations of series like “The Lord of the Rings” and the “Harry Potter” franchise. J. R. R. Tolkien and J. K. Rowling wrote deeply descriptive and complex stories with multifaceted fantasy worlds that readers have been diving into for decades. Both book series are certainly successful on their own, but the addition of their movie counterparts opened the door for audiences to experience that worldbuilding in a much shorter time frame and with astounding visuals. In these cases, the movies are better than the books because they work in tandem with the source material and take it that extra step. Overall, they add to the audience’s experience of the fictional world (even when they’re subtracting material from the written story, like Peeves in “Harry Potter,” which I’ll admit I’m still grumpy about).

Books and films have definitively different strengths and weaknesses when it comes to storytelling, and certain books may be better suited for the big screen than others. When it comes to making the transition from a written medium to a visual one, book fans can only hope that the filmmaking team has the original story’s best interest at heart. When that happens, a fictional world can be further developed into something truly special.

Mikayla Buhbe is a writing and literature major, so this is awkward, but she still thinks “Twilight” is the best book-to-film adaptation based purely on its meme potential. 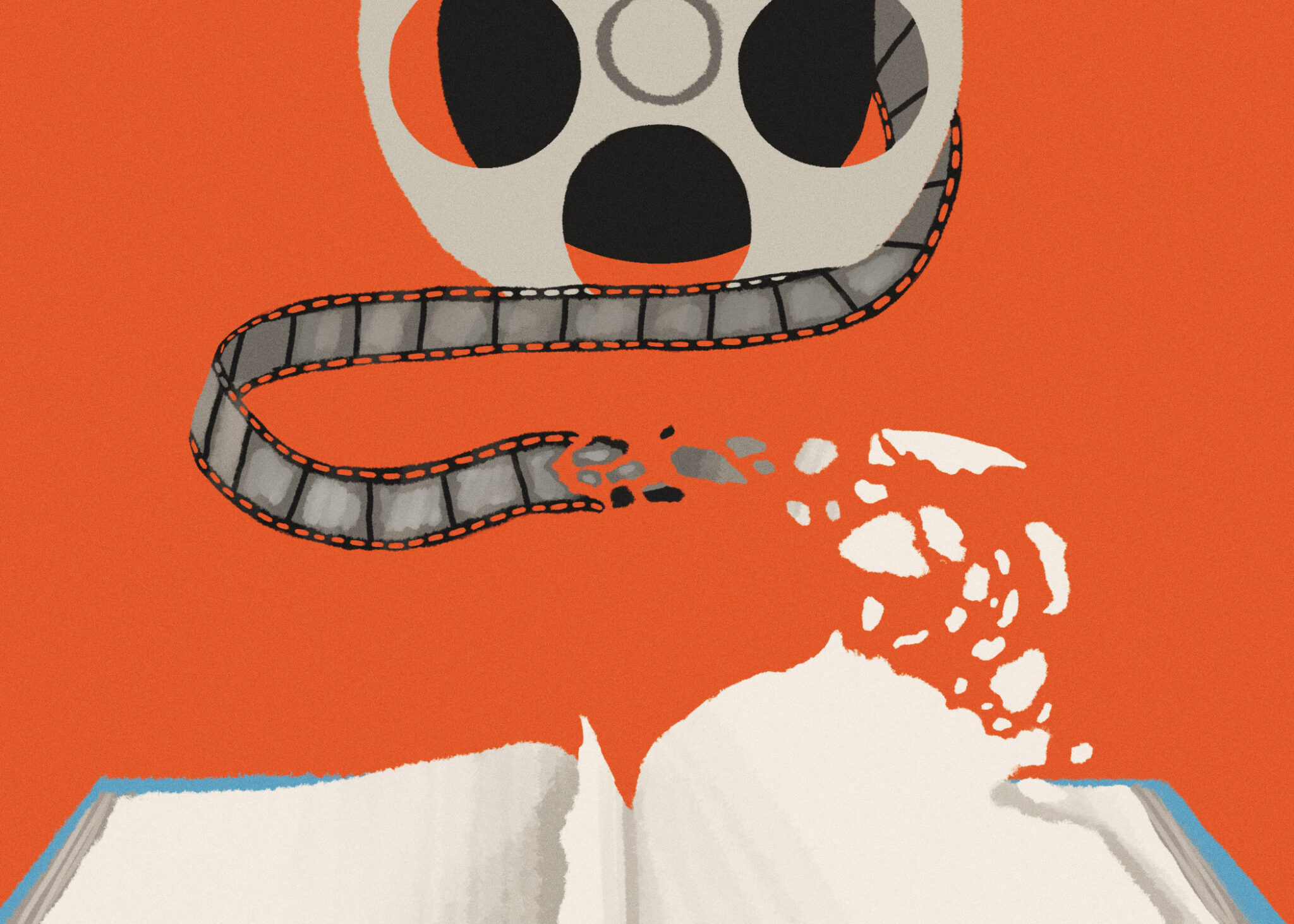 The Books Are Almost Always Better

Yes, the world of film provides an array of incomparable storytelling methods: compelling soundtracks, simple yet engaging storylines, well-executed dramatic irony and actors’ expressive performances. But, to put it simply, books do not belong in cinema. An author’s careful craft in relaying their vision of a world is rarely done justice by Hollywood production teams.

The adage is undoubtedly true — a picture can tell a thousand words. Likewise, a thousand words can paint a moving picture. In a book, a reader can freely make judgements; each character and foil are uniquely interpreted. We can easily be swindled by an unknown evil or blindly follow a red herring. Yet, a casting director premeditatively determines a character’s perception. Chiseled jaw lines and angled eyebrows promptly depict the villain. And the pretty faces of A-list actors remain shining in our minds as the dynamic protagonists.

And while there is no one I would want more to have depicted Hermione, Emma Watson was not the mental image I first made upon reading her impossible-to-pronounce name. Moreover, most of the “Harry Potter” film franchise actors remain to be known foremost for their work as child actors.

Now, the fault is surely mine for having watched and re-watched the “Harry Potter” franchise more times than having read the books. I’ll admit it — they’re pretty magical. But at this point, all I can remember is the plot of the movies. The house elf rights revolution that Hermione led? Or Dumbledore’s since-memed “calm” reaction to Harry’s name being selected from the Goblet of Fire? It’s like they never happened.

More recently, I read Khaled Hosseini’s “The Kite Runner,” a compelling novel about innocence, guilt and atonement as a child grows up in a country soon torn by war. Atop my copy of the book was a sticker that read, “Now a Major Motion Picture.” I thought back to this advertisement several times while reading and could not imagine a viable movie adaptation. The first-person narration style, best described literarily as an indirect interior monologue, matured and changed alongside the protagonist as he grew up. It seemed impossible to imagine this translated into a film. The tangible feeling of guilt that the main character takes with him to his grave would not be nearly as powerful by means of a movie’s omniscient storytelling.

Not only are the storylines and approaches to storytelling distorted in film adaptations of books, but there is also an argument in how quickly we consume the medium. The most common runtime for movies is between 80-120 minutes, and as streaming platforms and movie theaters are greatly accessible, movies are getting longer on average. The necessary weeding of details in a plot are to be expected.

Still, streamlining aside, a book with even a simple storyline and its film adaptation are likely to be vastly different. Unsurprisingly, the speed at which we read is different from actors’ performances. A script is not the novel, nor is it the final product. It is only a collection of dialogue and various cues. Between various actors, producers, directors and technicians, the impact of storytelling becomes a little lost.

In a book, rather, it is the responsibility of a good author to change the pace of writing, guiding the reader to read at seemingly different speeds, adjusted to the type of scene. While authors may be present in the creative production of film adaptations, the directors and producers ultimately have their own interpreted vision.

Books and movies are in their separate categories, but the film adaptations for our favorite books seem to always fall short of our expectations. To this I ask what the purpose of literature is. Writing and reading come as an escapism to many. An opportunity where a world can be introduced and picked up in a matter of pages. And where time can be slowed or bent as needed. Ultimately, what makes literature its own art cannot be reproduced.

Maya Salem is also a writing and literature major who will likely continue to (hypocritically) enjoy the “Harry Potter” movie franchise, but surely not as an example of an adequate book-to-film adaptation.