After overcoming the winter surge of COVID-19 cases, Santa Barbara County slowly began crossing the necessary case metric thresholds to finally arrive in the orange tier of the state’s reopening guidelines. Throughout the last year of the pandemic, some Isla Vistans — in a college town known for its party culture — did not pause their large gatherings while the county was at the height of COVID positivity. 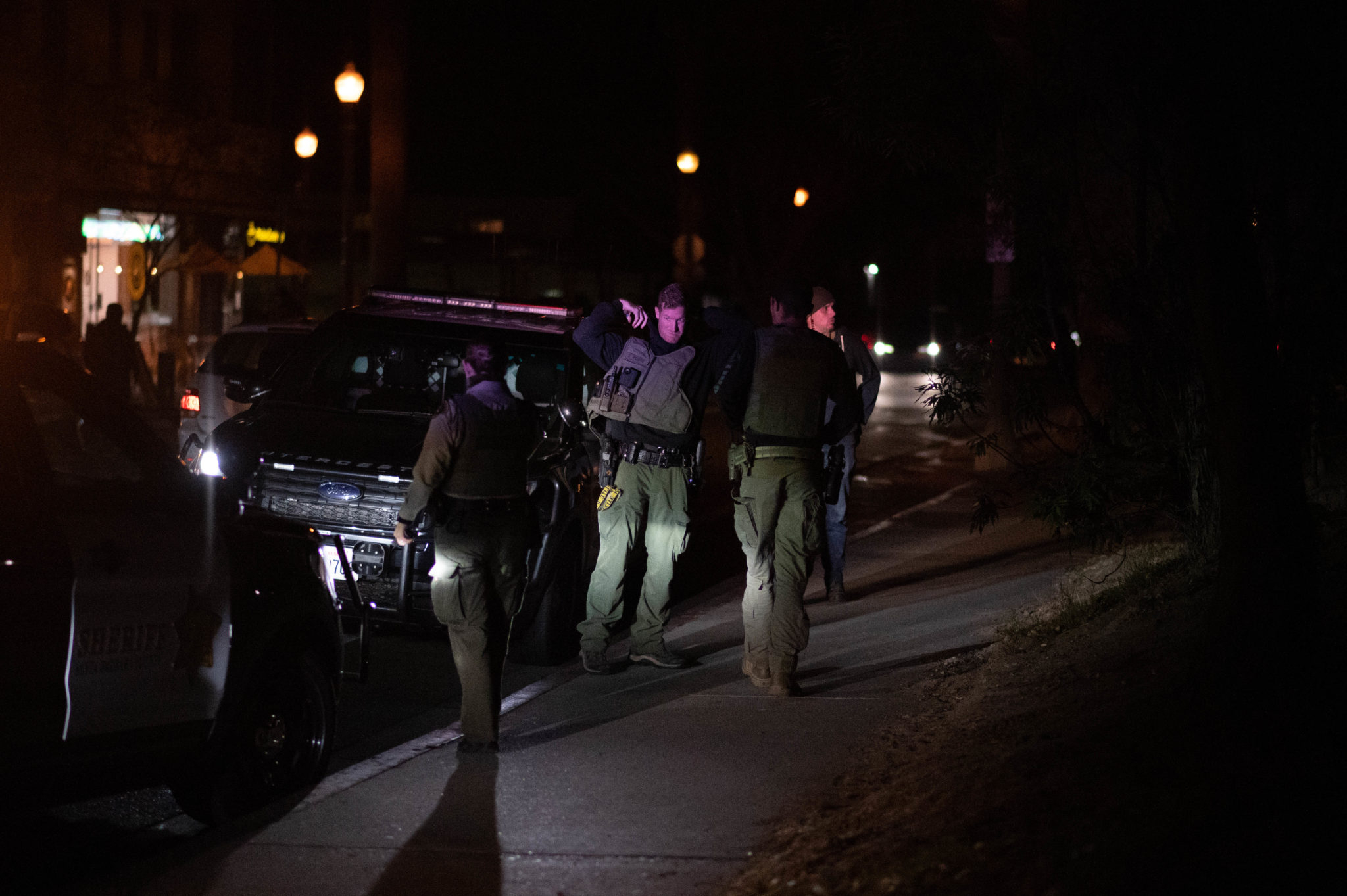 According to Community Resource Deputy Justin Schroeder, in an education-first approach, law enforcement first informs the offenders about local public health orders prohibiting the exhibited behavior and shuts down the large gathering — defined in the purple tier as a gathering with more than three households.

Van Do-Reynoso, Santa Barbara County Public Health Department (SBCPHD) director, said at a COVID-19 press conference in February that she supported the education-first approach. She added that she appreciated both UCSB and Santa Barbara City College for being more active in their efforts to get students to abide by public health orders.

“[I] always believe that we should educate first and then move into enforcement, so I support that strategy,” Do-Reynoso said. “I also support the strategy of UCSB and SBCC becoming more diligent in enforcing academic sanctions as well.”

It will, however, “take our community efforts as well as the academic institutions’ effort, as well as the college students themselves, in order for us to maintain the traction that we’re seeing,” she continued.

To report a large gathering in I.V. that is in violation of county public health guidelines, the college town’s residents have two options: alert UCSB or local law enforcement.

When the university receives a report of a violation with an address, but not the names of the violating individuals, it will deliver a letter of concern to the residence, according to UCSB’s COVID-19 Violations Dashboard. The dashboard details that the university has delivered 191 letters as of April 22 — some of which were delivered to repeat offenders, though the university says on the violations dashboard that it’s had very few repeat reports.

If a specific address has been reported repeatedly and the university is aware of who the offending individuals are, the students have to go through the student conduct process, which involves the adjudication and sanction process as described in the Student Conduct Code,  according to UCSB spokesperson Andrea Estrada. Additionally, if any lease violations have occurred, the university informs the county and the property owner to decide if an eviction is appropriate.

When the university is made aware of the names of the offenders, it delivers a letter of concern; the Dean of Students Office will also contact them. According to the dashboard, 126 students have been contacted by the UCSB as of April 22. If the Dean of Students Office, UCPD or the Santa Barbara Sheriff’s Office has sufficient evidence, it might refer the student to the student conduct process, but the COVID-19 Violations Dashboard states that there are very few repeat offenders.

“According to Student Affairs, this is impossible to answer because we don’t always know who the students are who host or attend a party. Usually, we only know the address,” Estrada said.

UCSB will alert Isla Vista Foot Patrol (IVFP) and the Santa Barbara County Emergency Operations Center, the County Executive Office’s and the Third District office if it receives a report involving public health order violations in public areas. According to Schroeder, the communication between the university and law enforcement can get complicated.

“The [IVFP] staff is usually receiving the complaint during business hours, Monday through Friday, so that complaint will come in on a Friday night, but [UCSB] won’t get it until Monday morning when they get to the office.” Schroeder said. “So, at that point, they usually reach out to me and say, ‘Hey, were you guys dispatched to a call at such and such address on Friday night? And I’ll look it up.”

When violations of COVID-19 related public health orders are reported to law enforcement, specifically IVFP, the reporting officers try to shut down the large gathering and educate the offenders on local and statewide public health orders. According to Schroeder, IVFP took a “100% education approach” toward the beginning of the pandemic.

Since April 2020, IVFP has been issuing citations to those violating public health order. Three were issued in April of 2020, two in December of 2020 and eight were issued in January 2021, the peak of COVID cases in I.V.

In addition to its education-first approach, IVFP also began issuing administrative fines in February. Schroeder says the split between education and enforcement is currently 50/50. The first two times IVFP receives a call for the same residence or group of people, it takes an education-based approach by providing an initial warning.

Schroeder clarified that recently, the education-based approach is only used toward minor violations wherein people of multiple households are partaking in small gatherings against the rules stipulated in Governor Gavin Newsom’s tier system in the Blueprint for a Safer Economy. Parties only receive education if a member of law enforcement sees the party being set up. Schroeder said that if law enforcement sees a large party occurring they will cite or ticket the offender.

If students were only given a warning, they would not be reported to the university. Only when enforcement is taken is the university brought into the loop.

After the first two calls to a residence, IVFP imposes citations and administrative fines that increase with every additional offense. The fines begin at $100 for the first offense, then $200 for the second and $500 for every offense after that. However, the efficacy of administrative fines are questioned because the offending individuals could simply split the fine.

“I’ve been involved with some groups and even seen posts that there are now some wealthier people that are offering to pay these fines for people. Whether it’s 20 roommates who get together and pitch in $5 … there’s not a whole lot we can do as long as that fine is paid,” Schroeder said.

Issuing administrative fines is a newer tool in law enforcement’s belt that was not originally used by all members of law enforcement because it requires additional training. Now, Schroeder said, all deputies in the department have the training and will continue issuing fines.

Citations, on the other hand, are criminal charges that are sent to the County District Attorney’s Office. It is within the district attorney’s power to press charges against the individual who was given the citation. According to Barbara Ross, executive assistant to District Attorney Joyce Dudley, the DA’s office has received six citations since the beginning of the pandemic until  April 19, 2021. Ross said that charges were pressed in at least one instance and that there are two additional citations “pending in the Sheriff’s system that have not yet been entered into [the DA’s] system.” All eight were from Isla Vista.

Both citations and fines are issued to the host of a large gathering but not all participants.

Third District Supervisor Joan Hartmann said if officers are choosing between a fine or a citation, she would prefer law enforcement to utilize administrative fines since citations would remain on a student’s record.

“I don’t want anything on young people’s records,” Hartmann said.

“We don’t have the restorative justice piece in place for COVID yet, but I want [the restorative justice program and COVID-19 public health order violations] to go together because I don’t want to penalize students financially, or with a record,” Hartmann said. “You just need to take a moment and see where you are in relation to your responsibilities to this wider community. I don’t want to punish young people.”

Hartmann said she favors a restorative justice approach to bring more questions of social responsibility into the conversation, as well as educating violators rather than just issuing a fine.

According to Schroeder, IVFP imposes consequences on a case-by-case basis depending on the severity of the violation.

“If it’s a very minor violation, like say, four people are gathering, but they’re from four different households, that’s technically a violation, because it’s only three households or less,” Schroeder said. “We might do education on that one, because literally, it was one person over. But if it’s a party with 50 people, there’s no education, we’re gonna go directly to enforcement, they’re going to be issued a citation.”

In addition, many I.V. homes can house 15 to 20 people, which Schroeder said can make it difficult for law enforcement to assess whether or not the party includes people from outside the host’s household. Schroeder clarified that though IVFP may not step in for a party with 15 to 20 people, a significant gathering with around 50 people would be shut down.

“For a party [with 15 to 20 people], we’re probably not likely to even make contact because we can’t prove that they’re in violation,” Schroeder said. “If we go up to the door, they refuse to answer and we’d like to take enforcement action, and it’s later found out that that was just one house that was having a birthday party for one of their housemates, then we would be violating their rights by going in and trying to take enforcement action.”

Schroeder said he has assisted with half a dozen of these kinds of evictions and is aware of at least one more circumstance where an I.V. landlord evicted their tenant for COVID-19-related violations. An eviction is a civil process in which law enforcement is not always involved, Schroeder said, so there could be more evictions in I.V. than the few he is aware of.

UCPD has the authority to issue administrative fines as well, Estrada said, and there have been a few instances where officers have had to address COVID-19 public health order violations on campus property.

Despite many students and I.V. residents complaining about law enforcement’s response to parties, or lack thereof, the education-first approach is one that is employed countywide.

“It really doesn’t feel like there’s been a university response. I wish they enforced actual university consequences for these actions because they put the lives of both students and faculty at risk,” McLaughlin said. “It’s very frustrating because for those of us who have been following all guidelines, it feels like they’re taking the effort we put in and throw[ing] it out the window.”

Third-year history and communication major Danae Hogg had a similar perception — but of local law enforcement and their response to large gatherings.

“Just from observing what the law enforcement has been doing, it doesn’t seem like they’ve really done a whole lot to discourage partying. Obviously there’s usually a lot of police out patrolling — especially on the weekends I’ve noticed — but often I feel like they’re kind of just walking past the parties, not really shutting anything down,” Hogg said. “It kind of feels like they’re almost encouraging it because they’re idly standing by while there’s such a big gathering.”

Attending UCSB is a privilege not a right. Expel anyone who violates the posted rules and the parties will end. There are thousands of applicants on admissions waiting lists waiting to grab your spot. Flouting basic public health protocol is a Darwin test. Fail and go home to mommy and daddy.

Liberal arts majors are pretty ignorant of anything to do with sciences. They definitely need some education on real world happenings.