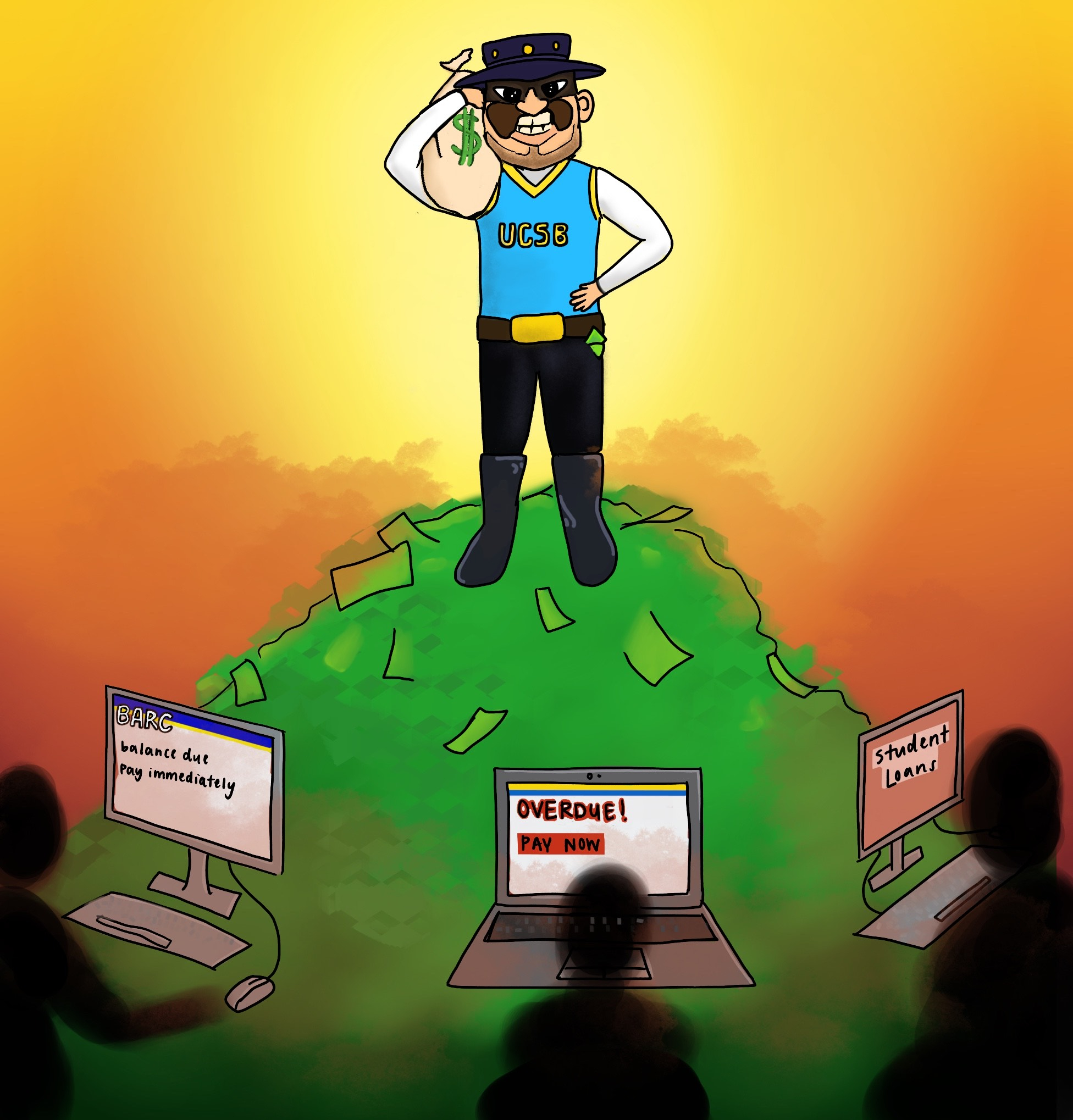 “The bureaucracy is a circle from which no one can escape.” — Karl Marx

If you’ve managed to make it through your time at UC Santa Barbara without ever having to delve deep into the enigmatic world of its administration or communicate with the distinguished and venerable aristocracy, then consider yourself lucky. It is not an experience I would recommend.

After many tedious hours digging through university records, researching public law and emailing unresponsive and irritable bureaucrats, the Young Democratic Socialists of America (YDSA) at UCSB discovered something that you probably could have guessed without putting yourself through any of the administrative bullshit.

UC Santa Barbara is screwing you over.

If you happen to be a part of the half of the student body upon which our enlightened administrators pity enough to bestow the millions of federal dollars granted by the Coronavirus Response and Relief Supplemental Appropriations (CRRSA) Act, then you probably got a pretty large check in the mail recently. On the other hand, you might be one of the 10,000 students denied any of this relief, in which case you’ve probably been so busy attending Zoom university and struggling to pay rent that you didn’t know that anyone was getting money from the university.

One might assume that the reason why about half the students at UCSB haven’t received a cent of relief from the university since the pandemic began would be because of scarcity — that there simply wasn’t enough money to go around. That assumption is false. Not only does the university have enough money to help every student, but they could also give significantly more money to the students they have helped.

A long, long time ago (meaning March 2020), the federal government passed its first stimulus bill called the Coronavirus Aid, Relief, and Economic Security (C.A.R.E.S.) Act. This act granted UCSB $25,204,196 in federal money, “at least 50 percent [of which] must be used ‘to provide emergency financial aid grants to students for expenses related to the disruption of campus operations due to coronavirus.’” While 50% of the money was required to be used for financial aid directed toward students, the other 50% could have been used for a number of things, such as subsidizing off-campus housing costs due to dormitory closures, subsidizing food services and providing prepackaged meals, hiring additional instructors to lower gargantuan class sizes or even better, more financial aid. As you can probably guess, the university didn’t bother with any of this.

Instead, the university opted to utilize only $12,602,098 of the total amount granted by the C.A.R.E.S. act to provide anything directly useful to students, equaling the exact 50% bare minimum they were required to provide by law. Other than that, an additional $1,952,446 has been spent on “campus safety and operations” as of Feb. 5, 2021. How the university managed to spend nearly $2 million on what is subsequently defined as “costs or expenses, related to the disinfecting and cleaning of dorms and other campus facilities” — facilities that have been almost entirely empty for over a year — is certainly beyond me.

The remaining $10,649,652 has been sitting in UCSB’s pockets, untouched, since the pandemic began.

When asked by Associated Students (A.S.) Senator Emanuel Roman why the university opted to give students the bare legal minimum of financial aid during the worst economic crisis of our lives while continuing to charge students the same tuition, the Vice Chancellor of Student Affairs at UCSB,  Margaret Klawunn, responded with the following:

Institutions can survive being in massive amounts of debt for extended periods of time, but people can not.

“The state of California cut the funding to the UC, so UCSB is $56 million short of state funding going into the year, and then we’ve had about a $100 million loss in our auxiliary enterprises, so shutting down the housing and dining and those things, we lost about $100 million dollars in revenue, so the campus is in quite the deficit on top of those COVID expenses, so that’s some of what the university is facing, and the intent of the funding was to make sure the universities could get through this time.”

These excuses might even be reasonable, if they were true. The vice chancellor was referring to a $300 million cut to the UC budget by the state of California in the 2020-21 fiscal year — a cut that will be more than fully compensated for by a $383.8 million increase in the UC budget for the 2021-22 fiscal year. Cumulatively, the UC system will be gaining state funding, not losing it.

As for auxiliary enterprises, the vice chancellor’s claims are impossible to verify. UCSB mysteriously doesn’t report its revenues in its annual permanent budget reports, and the UC’s annual financial report lumps in income from auxiliary enterprises with its medical centers and “educational activities.” Further, the UC actually reported a net increase in this revenue in the 2019-20 fiscal year.

Yet in truth, it doesn’t really matter whether UCSB has gone deeper into debt because of the pandemic or not. Institutions can survive being in massive amounts of debt for extended periods of time, but people can not. For example, the federal government has been trillions of dollars in debt for my entire lifetime and has only been increasing its deficit year after year with impunity. If a human being like any of us lived this way, they’d be living on the street. That’s a genuine possibility for the tens of millions of college students in this country, who collectively hold over $1.71 trillion in student loan debt and are graduating into the worst job market since the Great Depression.

But UCSB can help change that. If the administration combined the remaining funds from the C.A.R.E.S. and CRRSA Acts, they could legally cut a $900 check to every UCSB student, graduate and undergraduate, as long as they’re a U.S. citizen. It’s certainly a move they can afford, considering they can apparently still afford to pay the chancellor an annual salary of $360,000.

That was what inspired YDSA’s  #$900ChecksNow Campaign — a campaign with a petition of over 500 signatories from UCSB’s student body, and which was unanimously endorsed by a resolution from the A.S. Senate. A campaign that has subsequently been ignored by the administration after YDSA delivered its demand letter to Chancellor Henry Yang over email, despite UCSB’s apparent democratic mandate.

I urge the administration to seriously reconsider ignoring this demand. The money could make a tremendous difference in the lives of thousands of students. For people like us, $900 could easily be the difference between making rent this month or living on the street, putting food on the table or skipping meals, paying tuition or going deeper into debt. Rolling the dice on our lives for the sake of balancing imaginary numbers on a spreadsheet somewhere is ludicrous.

Taylor Clark believes that it is UC Santa Barbara’s responsibility to protect the financial well-being of students by providing direct and universal $900 checks now.

“How the university managed to spend nearly $2 million on what is subsequently defined as “costs or expenses, related to the disinfecting and cleaning of dorms and other campus facilities” — facilities that have been almost entirely empty for over a year — is certainly beyond me.”… meanwhile, faculty who for one reason or another absolutely had to come to campus were told to purchase their own cleaning supplies out of their own pocket because UCSB had none available… faculty were also told to clean up all the UCSB surfaces they touched with those cleaning supplies they purchased.

This is disgusting. A bloated UC harvesting taxpayer dollars and then not passing them on to students who are paying tuition and off campus housing costs throughout the pandemic. They need to be held accountable in court if need be.

The same one trick pony that got them kicked from reddit. Repeating the same tired argument over and over again hoping to stoke resentment and lead to a poor solution. Even if the school were to distribute the rest of the money not every student should get 900 they should be distributed to the neediest students and not every one equally. That is absurd and stupid its not how any financial aid is distributed.

That is absurd and stupid its not how any financial aid is distributed.

Ah, yes. Because financial aid is currently being distributed quite well. no problems there! How absurd and stupid of them to protest this efficient and egalitarian system we live under.