The Daily Nexus
Tech
The Physics Circus Travels To Cyberspace, a Detour Brought on by COVID-19
April 23, 2021 at 11:00 am by Devanshi Tomar

For the past 20 years, professors, graduates and undergraduates at UC Santa Barbara have worked together to organize the Physics Circus, a way of community outreach designed to help teach and animate physics concepts to local elementary schools in the county.

The Physics Circus student-volunteers gathered in a Zoom room. Courtesy of Michael Zimet 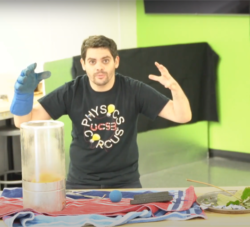 According to Physics Professor Jean Carlson, those involved in the Physics Circus would organize Family Science Nights for students and parents to watch science demonstrations.

“We were doing assembly shows for 100 or so kids every night, and at the time, there weren’t many [universities] doing science nights in the community like that,” Carlson said. “Back in the day, we were one of the first programs that visited the schools and did science experiments. It really took off and has become a big component of how UCSB interacts with and does outreach in the community.”

In response to the pandemic, Carlson said that the team had to rethink their methods of outreach to disseminate learning in a safer, yet still exciting and effective way.

“We wanted to make sure we were still connecting with schools, especially because everybody was feeling burnout and missing opportunities like the planned science field trips to Santa Catalina,” Carlson said. “This was a way to do something fun and special for them, and keep the larger vision of opportunity in science alive for the kids.”

Graduate student and program coordinator Michael Zimet led the effort to shift to an online learning format. The most important aspect of science education for elementary schoolers is hands-on science demonstrations, he said. So, figuring out how to bring the science to life in a virtual setting was the biggest challenge. 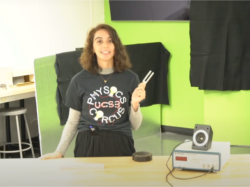 Another presenter, Molly Kaplan, carrying out a presentation on sound. Courtesy of Michael Zimet

“The excitement and hands-on component was what we wanted to preserve,” Zimet said. “So we did that two ways: with traditional videos and the development of home experiments that would guide students step-by-step, like using balloons to demonstrate static electricity.”

Because of this new part of the program, Zimet said they have been able to create a remote library of content that is accessible after or before online events. Carlson added that because of the changes to the program to address the pandemic, interactions with students have been augmented, rather than diluted.

“I think Science Nights are a great way to reach a lot of people, but the Zoom calls with 20 or so students, where we have a more intimate quiz format where they just ask us questions is also of great value that increases our radius,” Carlson said.

Zimet added that the transmission of excitement and joy for science can be more personal in a classroom setting, and an online format allows for those connections. Carlson attributes the success and growth of the program to the collaboration between those involved — graduate and undergraduate students from various disciplines such as English, earth science, math or chemistry. This diversity, she said, allowed for innovation and perspective required to successfully move the Physics Circus online.

“It’s been wonderful to support the creativity of the student volunteers,” Zimet said, “and the online demos have been a great addition that I think will persist, even when we go back to in-person learning.”