The Daily Nexus
Listicles
Oscars 2021: Everything You Need to Know About the Best Picture Nominees
April 23, 2021 at 1:19 pm by Luc Le 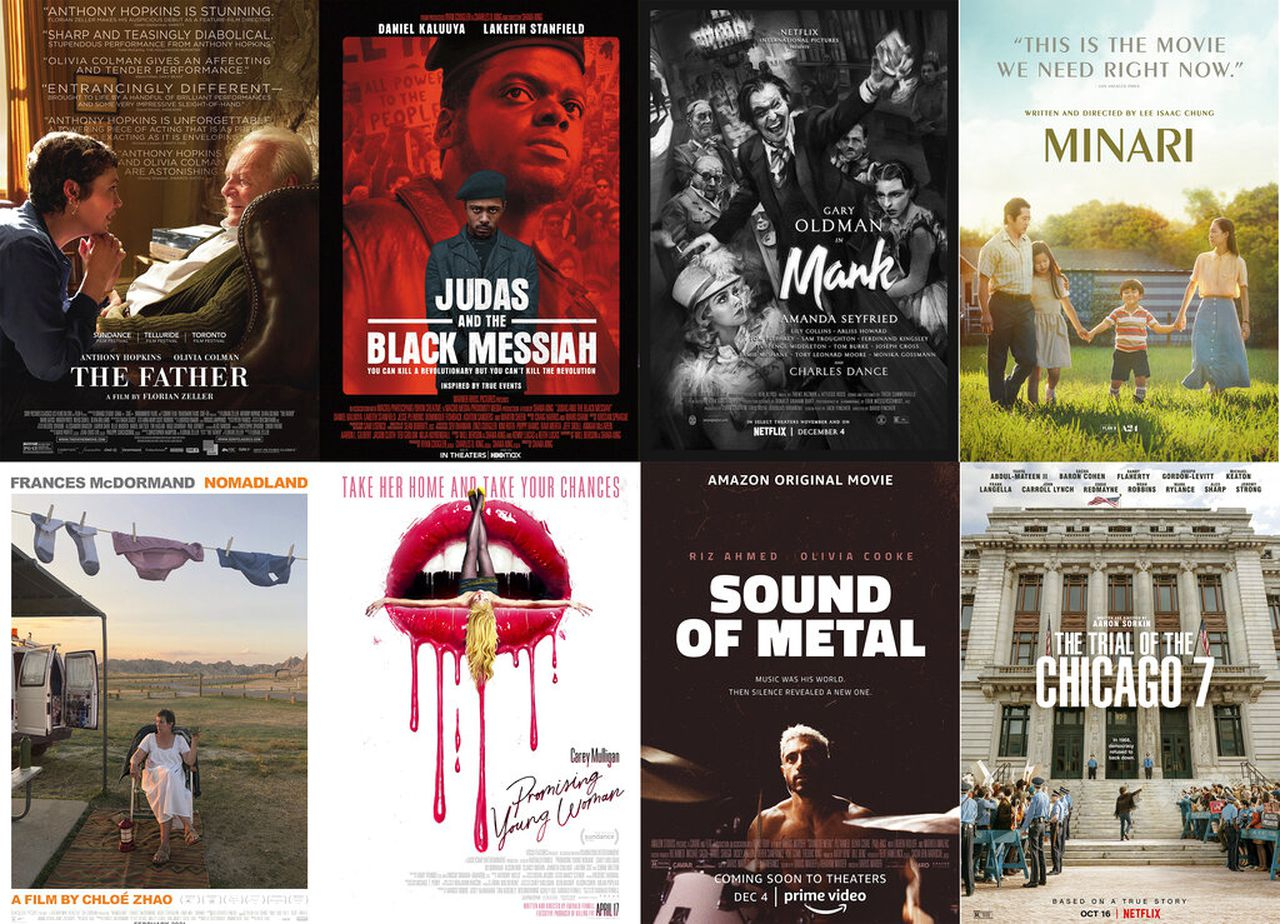 There is no question that it’s been a difficult year for the film industry, with the COVID-19 pandemic forcing the cancellation of movie releases galore and the shuttering of theaters around the world. But cinema’s biggest night is once again upon us — and, with it, a slate of highly acclaimed contenders for the coveted title of the Academy Award for Best Picture. Here’s everything you need to know about this year’s nominees.

The directorial debut of French writer-director Florian Zeller, “The Father” stars Anthony Hopkins as an elderly man with dementia struggling to keep hold of his grasp on reality as his mental state continues to deteriorate. It’s a profound (and profoundly upsetting) performance by the legendary actor: menacing in one moment, and child-like and vulnerable in the next.  Despite this being only his first film, Zeller reaches deep in the bag of film technique, using the same actors in different roles and playing with linearity to bring us directly inside the mind of someone suffering from dementia, creating a film that is disorientating, heartrending and beautiful in equal measure.

Fair. As good as “The Father” is, it’s not nearly as splashy or societally relevant as some of the other contenders. But the sheer strength of Hopkins’ and Coleman’s performances means you can’t count it out.

“Judas and the Black Messiah”

There may be no subject more pressing in contemporary American society than that of the institutional injustices within it. And, as follows, there may be no film released this year as urgent as Shaka King’s “Judas and the Black Messiah.” The story of Fred Hampton, the 21-year-old leader of Illinois Black Panther Party, and his eventual betrayal and assassination at the hands of the FBI, “Judas” is simply electrifying, propelling itself along through both Daniel Kaluuya’s rousing performance as Hampton — and the real-world context of racial strife caused by the continued killing of young black men at the hands of law enforcement. But it’s not just the social relevance that makes “Judas and the Black Messiah” great: the drama here is incredibly gripping, even if we already know what the ending will be.

Good. In a year marked by ongoing protests against police brutality and racial injustice, “Judas and the Black Messiah” finds itself well-positioned to appeal to an Academy that has become more inclined to select films that are socially relevant. But rarely has the Academy selected films as overtly and explosively political as “Judas” for Best Picture. Will this be the year that changes?

Profiling screenwriter Herman J. Mankiewicz as he writes the legendary “Citizen Kane,” David Fincher’s “Mank” enters Oscars season with the most nominations of any film at ten total. Shot in the black-and-white style reminiscent of Hollywood’s Golden Age, “Mank” both pays homage to the classic Hollywood style — and sharply criticizes it, as we see through the alcoholic, neurotic eyes of Mankiewicz (played superbly by Gary Oldman) how the institutional structures that govern cinema are used and abused by those in power to further their political aims. To be sure, the cliche of the struggling, alcoholic writer is well-worn, but the sharpness of the script and the striking visuals make “Mank” feel more nostalgic than tired.

Low. There’s no question that the Academy loves films about the mystique of Hollywood (see: “La La Land” (2016) and “Once Upon a Time In Hollywood” (2019)). And “Mank” does check all the boxes of a Best Picture contender: prestigious director, A-list actors, biographical subject matter. But against this year’s crop of nominees, “Mank” feels rather uninspired. As the Nexus’ Jonathan Kim writes, Fincher’s latest film feels as though  “one of the smartest kids in class seems to have phoned it in” — not exactly a recipe for winning cinema’s biggest prize.

A portrait of the fringes of American society in the wake of the 2008 financial crisis, Chloé Zhao’s “Nomadland” does not announce itself as much as sneak up on you with its gorgeous cinematography and quiet, contemplative nature. Frances McDormand puts in potentially the best performance of her career (no small feat, given her accomplishments) as Fern, an elderly widow forced into a nomadic, van-dwelling lifestyle after losing her job in the recession. Like its protagonist, “Nomadland” is distinctly unvarnished — mundane, even. But through Zhao’s lens, we’re given a sensitive, achingly beautiful picture of resilience, longing and the bravery of joy, all set against the majestic backdrop of the American West.

Very good. In a year filled with so much uncertainty, “Nomadland” is unquestionably the frontrunner, having stormed its way through the Golden Globes earlier this year. But being the frontrunner comes with increased scrutiny, too — the film has received hefty criticism for its overly rosy portrayal of gig labor at Amazon fulfillment centers. Will that affect the Academy’s decision-making? That remains to be seen.

Unfairly or not, “Minari” is perhaps best known for controversially being nominated for (and winning) the Best Foreign Language Film category at the Golden Globes. But Lee Isaac Chung’s semi-autobiographical “Minari” is about as American as it gets. The story of a Korean immigrant family who moves to rural Arkansas in hopes of starting a farm, the film oozes warmth from every corner, weaving a supremely tender portrait of family, hope and assimilation deep in the country’s heartland. It is a simple and familiar tale, but Chung’s personal touch and beautiful camerawork make “Minari,” in the words of Katie Caracciolo, “one of the truest contributions to the American storytelling tradition” — and one that feels especially poignant given the surge in hate crimes against Asian-Americans in recent months.

Fair. Its win at the Golden Globes would likely make “Minari” a strong contender in most other years. But unfortunately, it’s hard to see the traditionally white Academy voters picking another primarily Korean-language film to win the year after Bong Joon-ho’s “Parasite”.

A bold, daring and stylish thriller that skewers rape culture and the stereotype of the “nice guy,” Emerald Fennell’s writing and directorial debut brims with both edge-of-the-seat thrills and prescient social commentary. Carey Mulligan plays Cassie, a medical school dropout who pretends to be blackout drunk at clubs to give would-be predators the shock of a lifetime. What follows is a wickedly smart, wickedly funny tale of revenge that’s as fun to watch as it is complex, topped off by a provocative bubble-gum pop aesthetic. The result is, as Katie Caracciolo wrote, “an utterly unique addition to the revenge-thriller genre” — as tragic as it is engaging.

Fair. The win of “Parasite” last year gives some precedent to the merits of the socially conscious thriller winning Best Picture. But “Promising Young Woman” wears its heart far more directly on its sleeve, for better or for worse — like “Judas and the Black Messiah,” it may be a bit too provocative for the Academy’s palates.

Riz Ahmed takes a star turn in Darius Marder’s directorial debut, starring as Ruben, a heavy-metal drummer who begins to lose his hearing. The signature feature of “Sound of Metal” is the way it uses sound design, often muffling sounds or cutting it out completely to mimic Ruben’s experience, creating a highly empathetic insight into the often isolating (and rarely depicted) deaf experience. But while Marder’s direction is well crafted, the film’s weight unquestionably lies with Ahmed, who disappears into the role with a quiet intensity that lends “Sound of Metal” an uncommonly great emotional heft.

Low. “Sound of Metal” is an excellent film, but it’s also one that seems to have flown completely under the radar in the Oscars race. It’s not an impossibility, but taking the top prize on Sunday would be a surprise.

“The Trial of the Chicago 7”

Another film with urgent societal relevance, Aaron Sorkin’s “The Trial of the Chicago 7” follows the infamous trial of the “Chicago Seven,” a group of anti-Vietnam War protestors charged with crossing state lines to incite a riot at the 1968 Democratic National Convention. The courtroom drama format allows Sorkin’s typically energetic writing style to shine through, creating a whip-smart and viciously entertaining tale that hits close to home in the age where mass protests (and the police violence that follows) continue to be front and center in our collective consciousness. A cast list full to the brim of great performances doesn’t hurt either.

Good. As strong as “Nomadland” appears to be, “The Trial of the Chicago 7” has a more crowd-pleasing nature that might give it the edge over the more polarizing “Nomadland.”  If there’s any film that can snatch the Best Picture crown away, it’s this one.