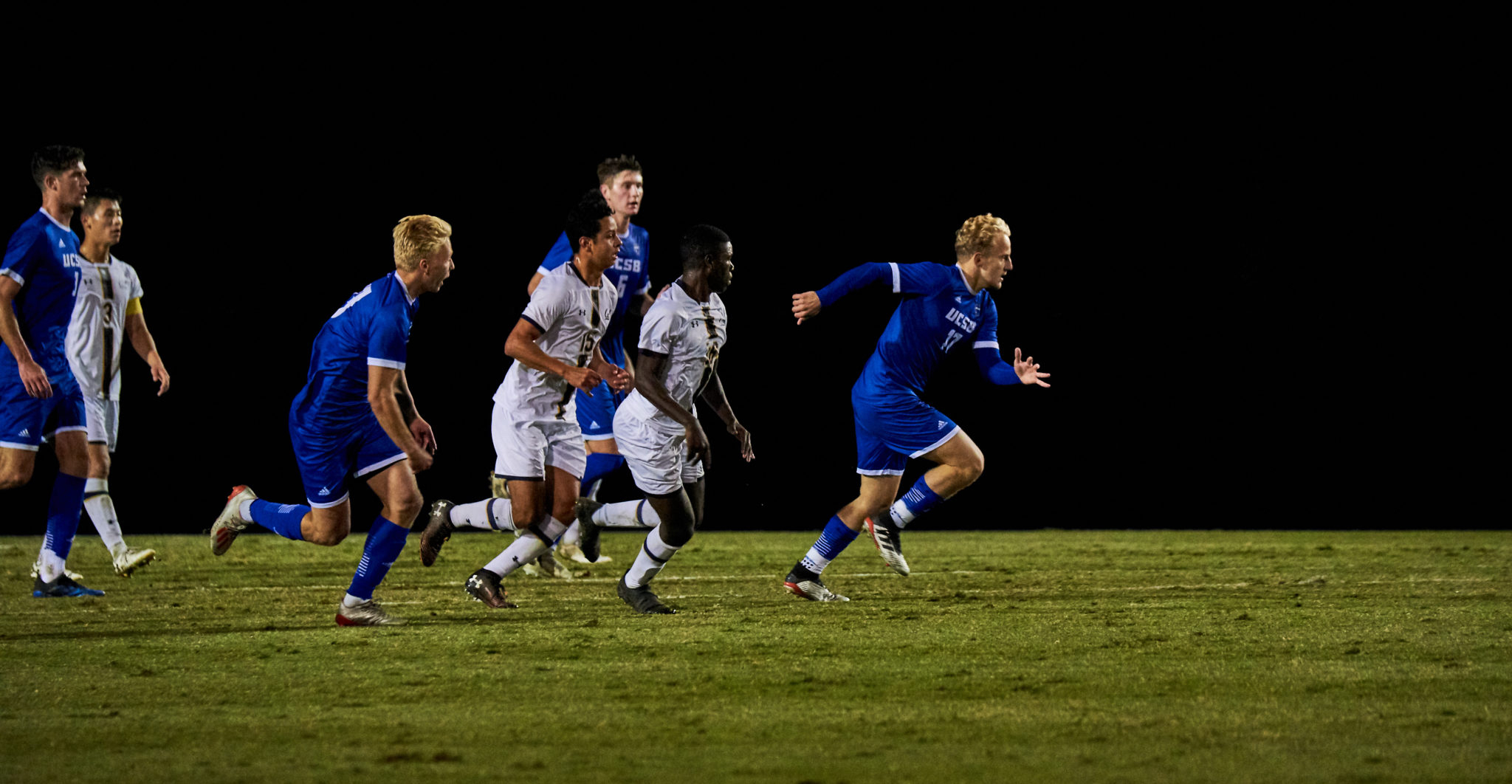 UC Santa Barbara continued their seven-game spring exhibition with a home game against the Cal Poly Mustangs for another iteration of the Blue-Green rivalry. The Gauchos came out on top with two late goals for a 2-1 win that brought a spark of life to what started out as a slow contest.

The Gauchos started their first home game since the 2019 season off strong with multiple shots from senior forward Ameyawu Muntari and junior midfielder Thaabit Baartman within the first 10 minutes of play. The Gauchos dominated possession and kept most of the play on the Cal Poly side in the first half, aside from a number of counters from the Mustangs. The first shot on goal for the Gauchos came from right-back Rigoberto Barragan with a bent, left-foot shot outside the 18-yard box met relatively comfortably with a diving save from the Cal Poly keeper.

The Mustang counterattacks proved effective when a lobbed ball into the 18 toward a Cal Poly attacker demanded that senior goalkeeper Alan Carrillo come off his line. He met the ball with a punch that simultaneously hit the Cal Poly player in the back of the head. The Mustangs were awarded a penalty that was converted into the bottom-left corner just past the arms of Carrillo in the 25th minute.

Despite holding most of the possession in the first half, the Gauchos had noticeable trouble converting any opportunities in the final third. Midfield presence, however, was strong with Lucas Gonzalez, who was back for his first game off an ankle injury, and 2019 Freshman of the Year Finn Ballard McBride, who demonstrated great field control and distribution. The Gaucho defensive line also proved strong, with awesome displays of speed and strength from Carson Vom Steeg, Sam Fletcher and Henry Davies against the explosive Mustang counters.

Upon the start of the second half, the Gauchos lost some of their possession control, which led to some scrambling. Following some back-and-forth with possession, the Gauchos found their equalizer in the 82nd minute with a stunning 30-yard shot into the upper-left corner of the net from Muntari.

The goal gave the team an apparent surge in morale that resulted in a consistent onslaught against the Mustang defense.

McBride just missed a golden opportunity for a game winner with a shot just outside the 6 that hit the left post. What McBride missed before, he later converted with a penalty off a handball from the Cal Poly defense. Reminiscent of the Mustangs’ penalty, McBride slotted the ball into the bottom-left corner past the outstretched hands of the keeper in the 87th minute. The Mustangs had one final opportunity to equalize two minutes later with a free kick just outside the 18, but barely missed by hitting the top post.

The match was very physical overall, with a large number of fouls from each side and a few yellows, but the Gauchos demonstrated strength in the defensive and midfield sectors. A more cohesive attack is likely on the to-do list of improvements for the team, but with the shooting capabilities from the likes of Muntari, the Gauchos look to be in a decent position.

The Gauchos will travel to Cal State Bakersfield on Sunday, April 25 for another exhibition match at 6 p.m., where they will look to maintain an unbeaten record.