The Daily Nexus
Virtual Reality
Frankenstein’s Monster Has Nothing On the Internet
April 16, 2021 at 9:00 am by Kiana Perez-Granados 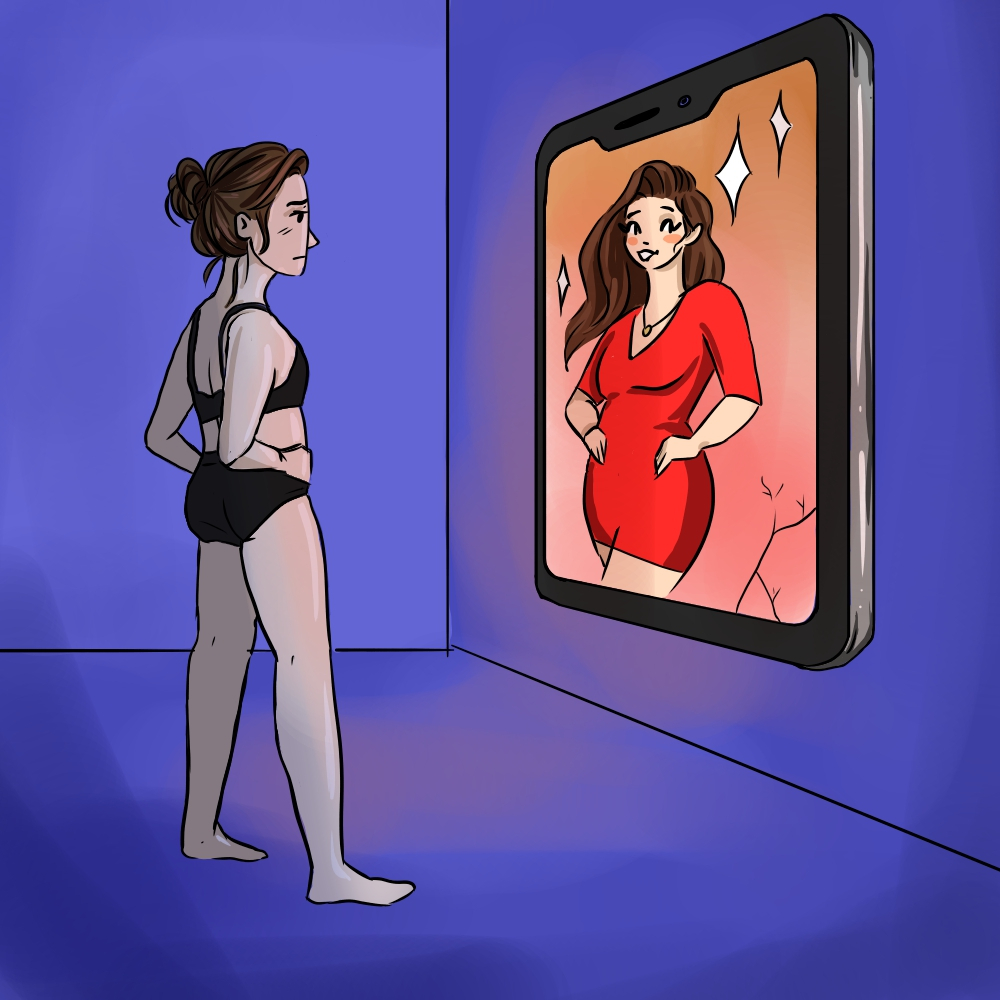 Once upon a time, the world was introduced to social media platforms like Instagram, YouTube, Facebook, Twitter and more recently, TikTok As a 19-year-old college student with enough time to spend watching entertaining YouTube creators or being sucked into a TikTok dimension where people make clay jewelry, I often forget that there is an outside world to enjoy.

Not only does social media affect whether or not I step into my backyard for a breath of fresh air, but it also forces me to reflect on my lackluster lifestyle — no, I’m not going to wake up tomorrow and find a Louis Vuitton dressing room outside my home, and no, I don’t know how to be pretty from a candid angle. The bottom line is, social media has taught the world to love themselves a little less.

Generally, social media is not the worst thing to happen to society. In fact, it has brought millions of people joy, opportunities for success and a vision for creativity. The positive impacts of technology are most often found when discussing romantic relationships and friendships. In the digital world, it is easy to communicate with people who live states, or even countries, away from you. Aside from connecting with others, social media can create peer motivation, ultimately serving as a source of inspiration.

On the deeper end of things, social media has also increased the number of mental health resources, offering websites where people can share similar experiences and vent to one another. There are also therapeutic sites created for people to seek comfort and health treatment via online platforms if unaffordable otherwise. It is very evident that social media can help others. In fact, it is inevitable when technology has become so advanced that we are now able to do things that were unimaginable in past decades. However, there are always flaws and consequences to phenomena that are greater than us.

It is not old-fashioned to question the negative ways technology can affect us. As a young woman, social media has both damaged and helped me. I find myself questioning the standards I have created for myself, such as having to be stricter on my physique, skin care, hair care and the like. In many ways, social media has insurmountably increased my levels of insecurity, especially when focusing too heavily on how people like and comment on a post of mine, as opposed to how much attention someone else may be receiving. It turns into a psychological game: I must be uglier than someone else if I am not receiving the same kind of compliments and attentiveness online as them, right?

It is common for there to be “increased social comparison among teens and young adults who measure themselves against peers and celebrities” as a result of social media. It is only natural for young men and women to have poor body images when constantly faced with what I would label as “the ideal,” such as coming across rendered photos that slim one’s waist or cover acne blemishes.

Beauty standards portrayed by social media often come across as highly unrealistic or unattainable, perhaps because it would mean that people could be perfect when the reality is that perfection is nonexistent. These standards can leave harsh consequences on a person’s mental health, such as body dysmorphia or issues about one’s identity.

With most of us, including myself, spending increasing amounts of time scrolling through these apps, the isolation that social media can cause has become especially prevalent.

Images that are considered to fit the category of “fitspiration,” “which typically feature beautiful people doing exercise, or at least pretending to,” “might make you harsher on yourself.” Although there is an upside to beauty standards and social media, such as spreading body-positive photos and creating new hashtags that encourage women and men of all sizes to feel comfortable in their skin, there is still a large emphasis on bodies; focusing on the body, as described in a study involving women and how they portrayed themselves, creates an environment where self-objectification is inescapable.

Beauty standards are just one aspect of how social media has negatively impacted society. “FOMO,” or the fear of missing out, is directly correlated to social media, seeing as apps like Instagram, Twitter  and Snapchat broadcast and expose the daily events of everyone’s lives. It can be unsettling constantly having to check these social media sources in order to feel involved when an event is happening. Similarly, social media can evolve into a self-destructing addiction. I have watched people around me change due to the addiction of constantly posting or needing to be entertained by a certain app. Sooner or later, social media consumes the person rather than the other way around.

The ways in which social media can become psychologically and physically damaging is through cyberbullying. Cyberbullying is defined as “bullying through the use of technology or any electronic communication, which shall include, but not be limited to, any transfer of signs, signals, writing, images, sounds, data, texting or intelligence of any nature.” What is particularly scary about social media in this context is that it gives people a screen to hide behind, protecting themselves from actually having to confront another person. Cyberbullying can have detrimental effects on the victim’s mental health.

The pandemic has only caused the debate on the merits of social media to intensify. With most of us, including myself, spending increasing amounts of time scrolling through these apps, the isolation that social media can cause has become especially prevalent. However, with in-person contact at an all-time low, social media can be the only outlet to escape from the stress of these unprecedented times.

Personally, since I have been using less social media during the pandemic, I have been able to learn more about myself. I have learned to cherish the people in my household as well as my friends, who make the time to stay off of their phones and do something fun with me.

I’m sure people like Evan Spiegel, Bobby Murphy and Reggie Brown, founders of Snapchat, or the creator of TikTok Zhang Yiming only had the best intentions when sharing their platforms with the rest of the world. Although it may seem like a stretch, I often refer to Mary Shelley’s famous romantic novel, “Frankenstein,” when inventors create phenomena greater than themselves and us.

For those who are unfamiliar with “Frankenstein,” an ambitious man and doctor decides to create life, seeing as he has always been fascinated with knowledge and has never been satisfied with his studies. In his attempt to reach his personal desires, he creates the famous monster we know today as “Frankenstein.” As a result, the doctor faces many consequences and witnesses the loss of loved ones.

Instagram, Snapchat, TikTok and the like are certainly not big, green, deformed monsters. However, they have become a dangerous tool in society, as well as platforms that can cause mental health issues. It is important to acknowledge how acting ambitiously and trying to further society can have repercussions. Thus, it’s okay to slow down from social media and take a break if necessary. I’m sure if Victor Frankenstein, the ambitious man from the novel, could have taken a break from the monster, the story would have ended much differently.

Kiana Perez Granados believes everyone should take a social media cleanse at least once in their lives.