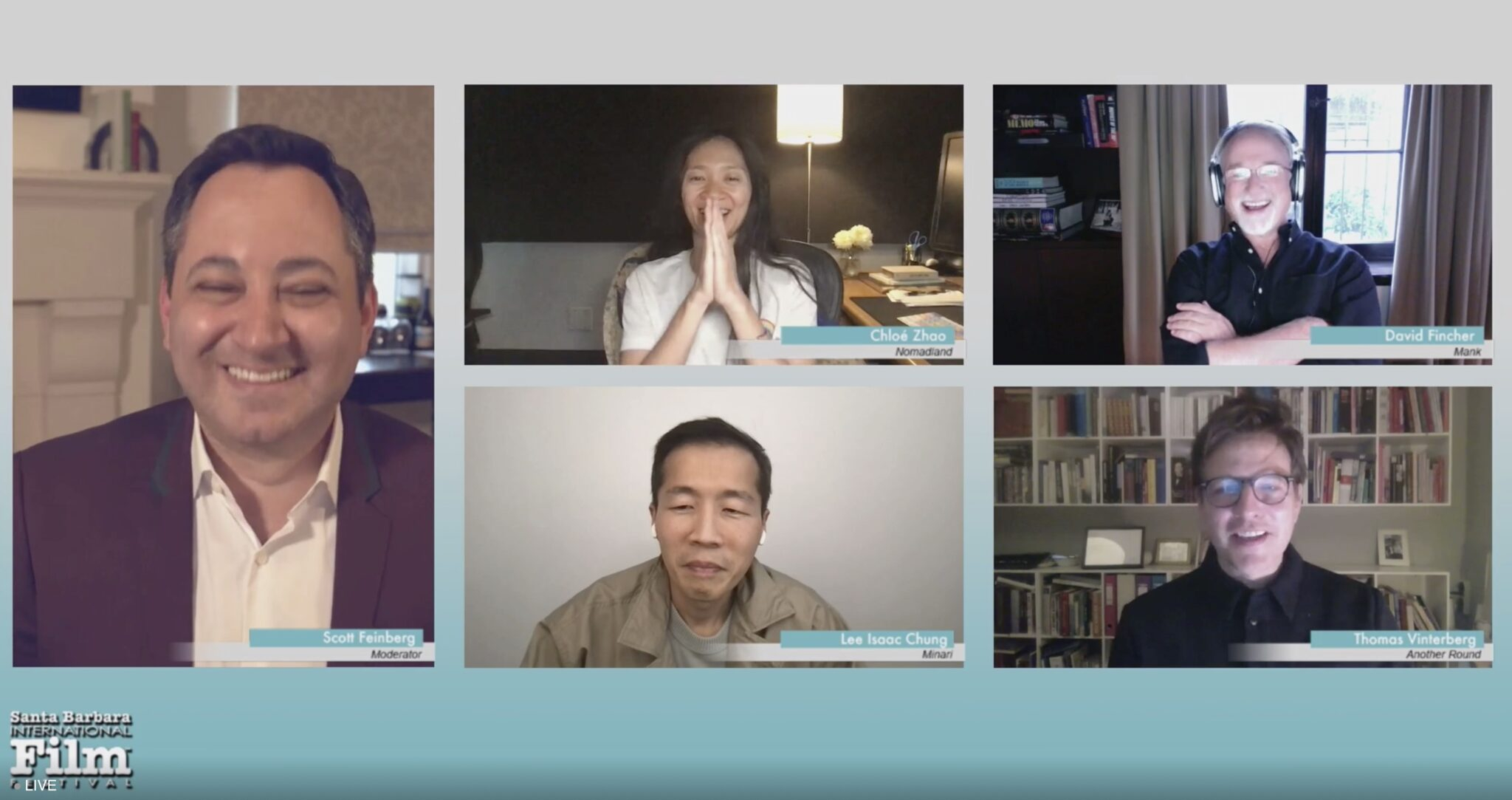 The Santa Barbara International Film Festival’s annual Outstanding Directors of the Year award ceremony was virtually held on Tuesday, April 6 and celebrated filmmakers Chloė Zhao, David Fincher, Lee Isaac Chung and Thomas Vinterberg, all of whom “pushed the boundaries in their storytelling and created films that showcase the art of filmmaking at its best.”

Scott Feinberg, a columnist for “The Hollywood Reporter” and the moderator for the night, arrived on screen and began by noting that each remarkable filmmaker being honored is also nominated for Best Director at this year’s Oscars. He poignantly remarked, “If you haven’t yet seen their 2021 films — or any of their films — you will rush to do so after this event.”

Feinberg began with brief one-on-one conversations that highlighted each director’s work, starting with Zhao and her film “Nomadland,” which takes place after the Great Recession and follows Fern (Frances McDormand) on a nomadic journey in her van through the American West.

Zhao stated that she always had an interest in American Westerns, adding that she didn’t want to tell another story set in New York City, where she studied film at New York University and lived for 12 years. Instead, she chose to go “west,” which she described as simply west of wherever someone is. Zhao, on her part, arrived in the Badlands in South Dakota.

The Beijing-born filmmaker also discussed her connection with producer and lead actress McDormand, describing her as being “authentically herself” and highlighting her “ability to be vulnerable and not always know her character, but be present in the moment.”

Next, Feinberg welcomed Fincher, whose film “Mank,” based on a screenplay that Fincher’s late father wrote, takes viewers behind the scenes of the making of the iconic film “Citizen Kane” in the 1930s.

Fincher revealed that he was resistant to the script at first as he found the storyline to be anachronistic, saying that he felt like “there was too much exposition here” and that the camera work didn’t seem to be doable. His father reassured him, however, that this was what movies were like during that time and “certain things gave the movie over in terms of the anachronistic qualities.”

Feinberg concluded this segment by asking Fincher the age-old questions: Is “Citizen Kane” the greatest movie of all time? And who wrote “Citizen Kane?” Fincher responded: “One of them” and “Herman Manquist, but it was expertly honed and polished by a brilliant 25 year old,” respectively.

Next, Feinberg brought Chung on the screen to discuss his film “Minari,” which follows a Korean-American family’s move to Oklahoma in pursuit of the American dream.

Chung recalled that this film almost did not come to fruition as he was going to quit filmmaking, but he decided to give it one last swing. The “Munyurangabo” director also wanted to try to provide his daughter with a film that she could have in the future, adding that the character that is intended to reflect a younger version of himself, David, played by 8-year-old breakout star Alan Kim, reminded his family more of his daughter than Chung himself.

Feinberg commented that “Minari” is an American film that features Korean language and that this language aspect was an important and non-negotiable factor. Chung agreed, stating that the language “reflects the way I grew up, the way Steven Yeun grew up, the way Christina Oh grew up and the way many other people on set grew up.” Chung elaborated that he wanted the film to reflect his own reality, speaking English outside of the home, and speaking a “family language” inside the home.

Finally, Feinberg welcomed Vinterberg on stage and noted that he is particularly honored by the Danish filmmaker’s attendance as he tuned in from Copenhagen, Denmark at 3 a.m. Vinterberg’s film, “Another Round,” follows four teachers who embark on an alcoholic drinking experiment together to see if they will find enlightenment in their professional and personal lives.

Vinterberg acknowledged the film’s out-of-the-box premise, saying that he found an engine for the story by looking at world history and feats accomplished by people who were not sober. He remarked that the storyline developed from there: the idea that “human beings should be born with a little bit of alcohol.”

The director also revealed that, during the film’s pre-production, there was a rehearsal week dedicated to acting drunk, but clarified that the spirit of the film “is more than alcohol, it’s about living as opposed to just existing.”

All four directors then gathered together to begin their conversation, with Feinberg asking the group if any of them had previously met one another. Fincher remarked that he found it strange that directors almost never meet, but despite no previous encounters, they all warmly engaged with one another as if they were old friends.

Feinberg then led the discussion by prompting the question: What is one thing about another’s film that they envied the most?

Chung commented that he is fascinated by everything Fincher does, highlighting one of Fincher’s tracking shots and his relationship to dialogue. Zhao stated that Chung’s “Minari” “spoke [to her] on a very personal level, every little moment, every family interaction, and it was such a humanistic portrayal of that part of the country.” She tenderly said that the film was beautiful and complicated.

Chung then asked Zhao if she would ever write a script about herself or film in China, and she responded that she would have to “not be afraid to look at [herself].” She remarked that she loves “telling stories about other people, it’s safer to find [herself] in other people,” commending Chung for his bravery to tell his own story.

The event continued with mutual appreciation for each storyteller’s work, and to conclude the evening, the filmmakers and their films were once again praised for illuminating the notion of perseverance. The films and their characters “urge us to not give up and to keep evolving,” and their visions are a source of inspiration to all of us.

Marisol Cruz
Marisol Cruz is the assistant Artsweek editor for the 2021-2022 school year. She can always be found listening to music.