The Daily Nexus
Opinion
Why We Should Split the Bill
April 8, 2021 at 9:00 am by Eric Heilmann 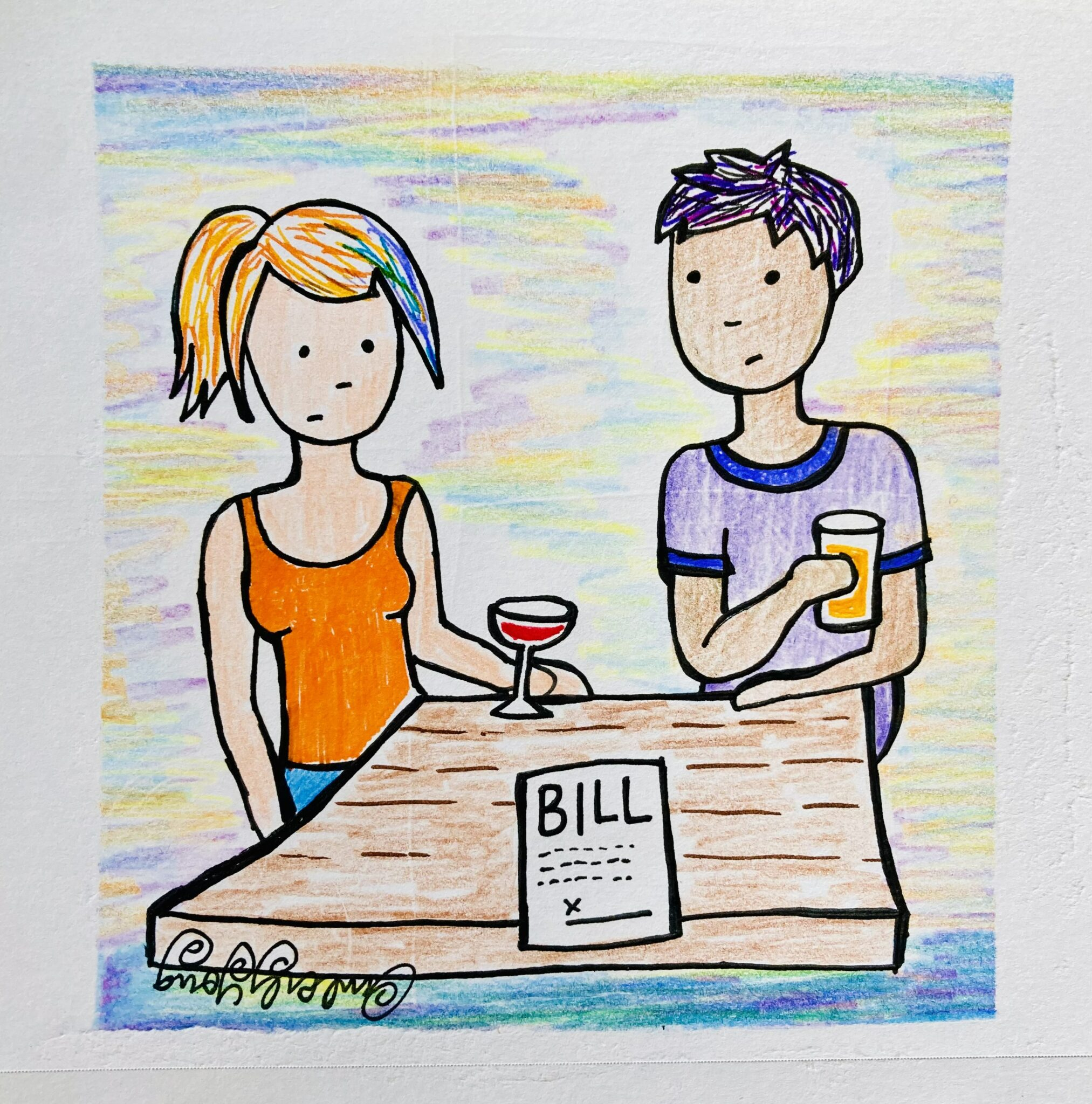 A constant debate on TikTok and between men and women is whether in heterosexual dating, the man should pay for the date or if the man and the woman should split the bill. Let’s make the answer clear.

If he says something like, “Hey, let me take you out,” implying that it’s his treat, then it makes sense to assume he will pay. Though it’s still good to have money just in case there was a misunderstanding and in the interest of avoiding unsexy “That ‘70s Show”-esque dine and dash awkwardness. On the other hand, if he says something like, “Hey. Would you want to go out with me?” which implies equal partnership, I believe women should default to paying for their own meal. If he wants to pay for your meal, then by all means let him, but don’t make him feel he has to. An example of making him feel obligated to would be making no move when the check comes or going to the bathroom when you see the waiter bringing it over. Also, I think taking turns is totally fair: He pays for one and you for another. But I think not paying your fair share is unacceptable.

First, it furthers gender equality. Theoretically, there is no reason why one gender should be expected to pay more or less for anything. What if we lived in a society where women were expected to pay for their date? Weird and arbitrary, right? Yet that makes exactly as much sense as our society where men are expected to pay for the date. I am a firm opponent of gender roles where there is no scientific basis for them. And even so, I believe nurture is greater than nature regarding differences between genders in attitude and ability. My point is that there is nothing special that makes a man better at paying for anything.

While we as a society continue to hold onto negative female stereotypes which affect political representation and employment among other things, we have also made great strides over the past six decades. It’s 2021. Girl, you’re more than capable of paying for your portion of the bill. Breaking down this gender expectation of men paying will move us closer to equality, what we all want.

Next, women should split the bill because it’s respectful. Frankly, I find it rude to expect someone else to pay for your shit when you’re more than capable of paying for it yourself. Also, visibly expecting him to pay makes us feel uneasy since we’re not sure whether us not paying means you won’t go out with us again. Whether or not he buys you shit shouldn’t determine your future together.

Third, paying for your share is fair. In our society, men aren’t just expected to pay for the date, but also to build up the courage to ask women out, get rejected, send the first message, carry the conversation and plan the date. It’s wrong that men have to do all the aforementioned heavy lifting, so the least you could do is pay for your own meal.

Just pay your fair share. It doesn’t make it even, but at least it’s fairer. I personally wish women would show more interest and contribute during the initial stages of dating instead of being passive and making us feel unwanted. It makes it feel as if it’s an audition where we put ourselves out there and you’re the judges that say yes or no and nothing more.

Now I will refute miscellaneous commonly used excuses by women who don’t want to pay.

Yes, it’s a nice gesture but saying it’s gentlemanlike implies that to not do so is ungentlemanlike, also known as impolite, also known as rude. That would be like someone saying a woman should always cook for a man because it’s “ladylike,” implying that not cooking for him is unladylike and unclassy. She can if she wants to or not, but both should contribute. Being polite is a given: Be nice and respectful, and treat others how you would like to be treated. However, not paying for her meal every time doesn’t violate any of these tenets. Taking turns is fair as long as it’s understood. But paying for her every time is above and beyond.

It’s so unlikely your date will murder or assault you and he shouldn’t be paying for the sins of other members of his group. He doesn’t represent all men. That would be like administering a fee to all U.S. Muslims when there’s an Islamist terror attack. It’s generalizing, which is wrong. Also, God forbid he does harm you, what’s the $20 you saved from him picking up the tab going to do? Unfortunately, nothing.

First, maybe he was busy and didn’t have time to clean up. Second, maybe casual isn’t such a bad thing. It’s 2021, not 1951, though he should definitely notify you beforehand. If a girl showed up in sweats, I wouldn’t mind. Third, even if he does look like he just rolled off a park bench, is that reason to refuse to pay for your own meal? What if the roles were reversed and the girl showed up looking like an unmitigated disaster and he was like, “You’re paying for my meal because you’re a mess?”

If you thought it was bad, it was probably bad for him too. No reason for him to pay double for a crappy night.

And he’s gonna do that with his money? Shallow much. Also, how pretentious is it to think you’re so entitled that you don’t need to pay? This mentality doesn’t sound conducive to a healthy relationship. Ultimately, you’re going on dates to find a partner, not a servant — to find someone to do things with, not solely to get favors from. At least I hope so.

You have a point there. It would feel good to take some money from the asshole since he already took a night from you and your faith in men and humanity itself. However, I’d still suggest taking the high road, pay and yeet out of there. And if you can opt to not pay for your meal if he’s a dickwad, then men can do it too if she’s a bitch.

Some other arguments why women should split the bill: First that it would cut back on some women using men for dinner, which is a waste of his time, money and hopes, and is really inconsiderate. Second, he could be broke so paying for your meal could be really financially straining for him. Chip in. Third, if you know you’ll be spending your own money, you can order what you want and not worry about ordering something cheap to be considerate of his money. Fourth, I don’t know where some men get the audacity to think that paying for someone’s food means they’re owed sex, but paying for your own meal could stymie this twisted expectation — saving you from his attempts to gaslight and guilt trip you the rest of the night.

As you can see, the reasoning behind why women should pay their portion outweighs the feeble arguments against it. Again, if he wants to do it to be gracious, all power to him. But, I think we need to break this expectation that men provide for women. It’s a baseless gender role inherited from a more patriarchal society with the breadwinner mindset. It’s also rude to make others pay for something you could pay for yourself, and it’s unfair he has to do all the work in courtship. Stigmatizing women who expect the man to pay can move us toward gender equality and alleviate a source of annoyance for many men. I’ve been on dates where I was expected to pay and I wasn’t angry or anything, but slightly irritated. I don’t know if some women don’t pay because they’re taught that it’s unladylike or that men want to pay, but I would rather feel we’re in this together, not that you’re in this on the condition that I finance it.

PS: To people who will say that boys complain and men pay, how does that make sense? Ask yourself that.

Eric Heilmann thinks that these days women should split the bill on dates.