The Daily Nexus
Nexustentialism
It's satire, stupid.
UCSB Freshman Voices: “We Thought This Would Be More Like Surf’s Up”
April 6, 2021 at 4:20 pm by Natalie Kothergirls 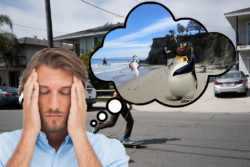 Well, Gauchos, Spring is here — and so is the looming disappointment that comes when all that “rebirth” that people keep talking about just doesn’t seem to be all that reborn. One such disappointment has become a popular consensus among current UC Santa Barbara freshmen, including both those in Isla Vista and those learning remotely from home: that none of this is anything like the 2007 blockbuster film “Surf’s Up.”

The film, starring Shia LeBeouf as the voice of lead penguin Cody Maverick, captured the hearts of Gen Z kooks all across California as a tender reminder of how much we love the beach and hate the inland empire. The film also served as a welcome sexual awakening for many tweens with a hard-on for the hot girl penguin voiced by Zooey Deschanel. One UCSB freshman, in his own defense, claims “she was hot tho.”

That freshman, Kyle DeNile from Newport Beach, had lots to say about Isla Vista’s disparity from Pengu Island. “Things are off to a rocky start. I haven’t met even one former surf star who faked his own death out of an inability to confront his own hubris. Like, what the hell, man?”

If there are any penguins in Isla Vista, our Nexustentialism street reporters haven’t seen any. One reporter spotted a chicken whose name is still unknown, and therefore both is and is not named Joseph (long for Joe) according to Schrodinger (Schrodinger 30). The chicken has not been spotted in the ocean. Students are encouraged to contact Isla Vista Foot Patrol with any chicken sightings or other surfing chicken-related queries.

Natalie Kothergirls might fuck Tank Evans, if given the chance.