The Daily Nexus
Sports
Gauchos Narrowly Fall to Creighton in First Round of NCAA Tournament
March 22, 2021 at 3:31 pm by Brandon Victor 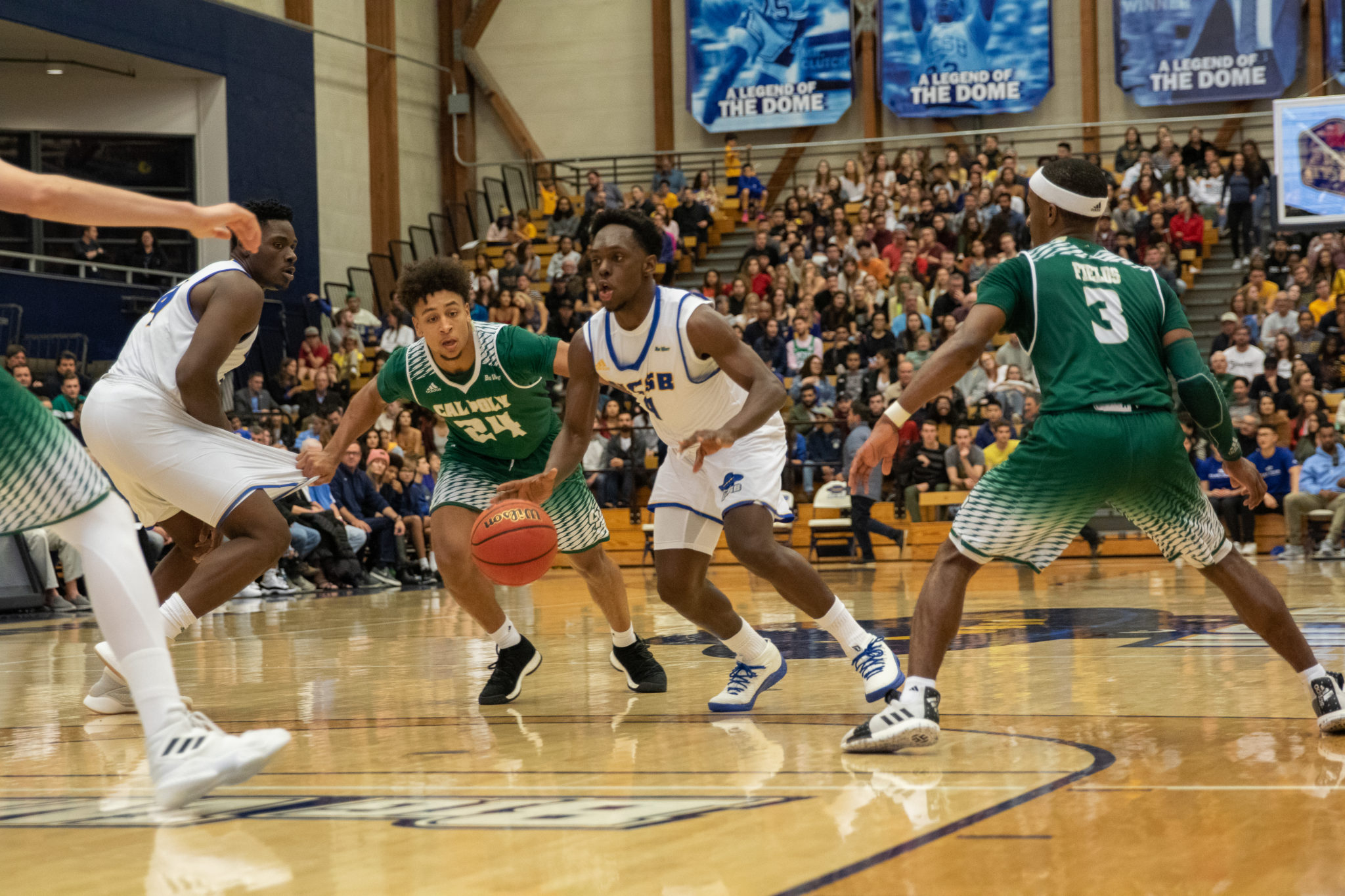 Despite a valiant comeback in the second half, the UCSB men’s basketball team came up short against Creighton University in the first round of the NCAA tournament, falling 63-62. With the loss, the Gauchos finish the season with a 22-5 record, while Creighton will advance to face Ohio University on March 22.

Following a back-and-forth first half, the Bluejays opened the second half of a 13-7 run, extending their lead to 47-37 with 13:32 left in the second half. After hanging around, the 12th-seeded Gauchos were in danger of losing their grip on the game.

That’s when the shots started to fall.

Until that point, Santa Barbara had largely struggled on the offensive end; in the first seven minutes of the second half, the ‘Chos shot merely 30% from the floor. Junior forward Miles Norris kickstarted the run for the Gauchos, making all three of his free throws after getting fouled behind the arc. Less than a minute later, senior guard Devearl Ramsey drilled a 3-pointer — only the second of the game for UCSB — to bring the deficit down to 6. With 10:22 left in the half, Norris followed up an emphatic block on the defensive end with yet another 3-pointer. Suddenly, despite the shooting woes earlier in the half, the Gauchos found themselves only down by 1 point.

Ultimately, the Gauchos would extend their lead to 6 — their largest lead since early in the first half — after senior guard JaQuori McLaughlin drilled a deep 3-pointer for the ‘Chos with 5:37 left in the game. While Creighton largely opted to double-team McLaughlin all night, the Big West Player of the Year still finished the contest with 13 points, 7 assists and 6 rebounds.

But Creighton — the runners-up in the Big East — weren’t done fighting just yet. A minute and a half later, a 3-pointer by senior guard Mitch Ballock pulled the Bluejays within 1 point.

Finally, Creighton regained the lead when junior forward Christian Bishop finished a powerful reverse dunk with 3:10 left in the half, bringing the score to 59-58. A minute and a half later, junior guard Marcus Zegarowski extended the Bluejays’ lead to 3 with a smooth jump shot. Zegarowski — the Bluejays’ leading scorer on the season — finished the afternoon with 17 points and 8 assists.

Yet again, the upstart Gauchos refused to quit. A strong layup by junior forward Amadou Sow chipped the lead down to 1. After Creighton fouled Sow on the next trip down, the junior calmly stepped up to the free-throw line and drilled both of his free throws to give UCSB a 1-point lead.

With 37 seconds left, the Gauchos were exactly where they wanted to be — up by 1 point and on the verge of pulling off a massive upset. All they had to do was get a few stops and UCSB would advance in the NCAA tournament.

While the Gauchos forced the Bluejays into a miss, Bishop grabbed a massive offensive rebound; after a reach-in foul by Sow, Bishop stepped to the line with the chance to give Creighton the lead yet again.

Sure enough, despite shooting only 57% from the charity stripe for the season, Bishop drilled both free throws. Instead of calling a timeout, UCSB Head Coach Joe Pasternack opted to let McLaughlin push the ball up the court. Yet again, Creighton double-teamed McLaughlin, who pivoted and found an open Sow in the paint. After absorbing contact from the defender, Sow narrowly missed a 5-foot shot near the hoop.

Sophomore guard Shereef Mitchell missed the front-end of the one-and-one for the Bluejays with 1.9 seconds left, forcing graduate guard Brandon Cyrus to heave up a prayer from behind the half court — a shot that missed badly. Despite an incredibly valiant effort, the Gauchos came up just short in their first tournament appearance in 10 years.

It’s a very difficult time for all of them, and our whole staff, because this game was right there for us,” Pasternack said. “This game can’t define our season. Our players did such an amazing job, off the court with COVID and on the court, competing for championships.”