The Daily Nexus
Science & Tech
UCSB Researchers Uncover a Hydrocarbon Cycle Beneath the Ocean
March 14, 2021 at 4:00 pm by Mackenzie Miller

Environmental restoration after oil spills can take years due to how difficult it can be to completely eradicate oil from the site of the spill. Clumps of tar may sink and escape cleaning methods, leading to widespread environmental consequences. 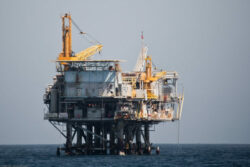 This new knowledge will allow for better oil spill response in the future, according to Love. Courtesy of Flickr

However, a recent discovery made by a research team at UC Santa Barbara suggests that an unsuspecting group of bacteria may just be the clean-up crew that the ocean needs. Among those researchers is Connor Love, a doctoral student studying earth science. For almost five years, he has been working on this project as part of an effort to accurately measure levels of hydrocarbon in the ocean.

Hydrocarbon compounds are found in petroleum from oil spills but they are also produced naturally by aquatic cyanobacteria. Love describes it as a “‘steady hum’ of natural hydrocarbons.”

Ocean microbes then break down these compounds and produce carbon dioxide which cyanobacteria use to produce more hydrocarbons. Love said that this effectively creates a massive hydrocarbon cycle that produces 500 times the amount of hydrocarbon than from human oil input.

However, rapid oil spillage can have a very different effect on ocean environments than this steady hydrocarbon production. Petroleum contains a wide variety of hydrocarbons that not all microbes may be able to break down.

“The ocean has an inherent capacity to handle the natural and steady input of hydrocarbons from seeps and cyanobacteria, but they will not be able to fully consume the excessive amounts of hydrocarbons that we keep spilling,” Love explained.

Love and his team were interested in measuring the size of this cycle and better understanding the different bacteria involved. The research team discovered that this hydrocarbon cycle can  “prime” the ocean to be better at handling the consequences of an oil spill. Microbes that constantly break down hydrocarbons from cyanobacteria, as well as from nearby oil seeps, may be more equipped to handle the effects of a large oil spill.

However, to obtain this newfound information, the team had to go out into the open ocean to collect bacterial cells on filters and then extract the hydrocarbons directly from the filter. According to Love, this was quite a grueling process for the researchers.

“It was honestly extremely taxing work, about 18 hours a day of just hard work, covered in salt, on a rocking boat,” Love said.

They did this for three weeks while aboard the R/V (short for Research Vessel) Neil Armstrong in the North Atlantic Ocean. But there were still perks to the job. Love remembered how “during [the] in-between moments, everything is more raw from exhaustion and people are more themselves, there are no ‘real world’ distractions.”

On top of these conditions, Love said their team faced more challenges. The diesel fuel from the boat could easily contaminate their samples because it is made up of many hydrocarbon compounds. This included pentadecane, which is the specific compound also produced by cyanobacteria that they were trying to isolate. The team took several precautions which paid off.

“We had clean samples with no contamination and enough biological material to work with which was a huge win for everyone involved,” Love said.

Ultimately, the arduous work and less-than-perfect conditions paid off. This new knowledge will allow for better oil spill response in the future. The spill clean up can now be catered to the specific ocean region and which types of microbes reside there, making restoration more efficient. While this is a huge step towards ocean restoration, it will not be a quick fix.

Prior to their findings, the extent of the ocean hydrocarbon cycle was largely unknown. Past research projects have been able to measure cyanobacterial production in the lab but Love said this is the first time that researchers were able to accurately measure this cycle in the ocean.

“[We can] use the knowledge of what compounds the microbes are consuming and what rate they consume these compounds in a spill scenario, from this we can be a sort of spill response teammate to the microbes and fill in the gaps that they can’t,” Love explained.