The Daily Nexus
News
Eyes on Your Own Tabs: How Academic Dishonesty Has Evolved in Remote Learning
February 28, 2021 at 2:09 pm by Katherine Swartz

Instead of being tested in a lecture hall, under the close watch of professors and teaching assistants, students’ only connection to the classroom this past year has been through a computer, and the understanding of what constitutes cheating is grayer than ever. 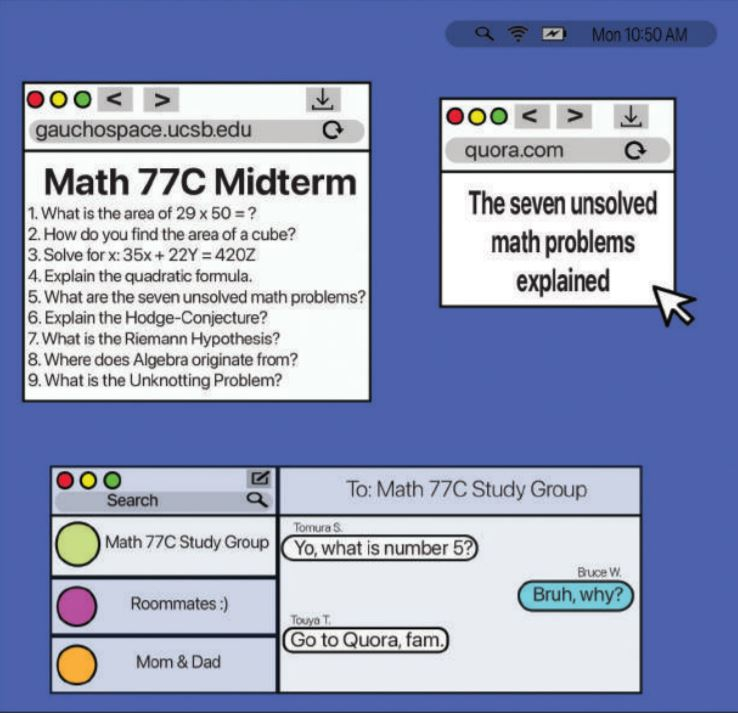 Consequently, the Office of Student Conduct reported last month that it has seen a large increase in referrals for academic dishonesty, directly attributing this rise to detachment from the classroom.

“Across the country, conduct offices at colleges and universities are seeing increases in academic dishonesty after making the abrupt switch from in-person to online learning. This is not unique to UCSB,” Associate Dean of Student Life Suzanne Perkin told the Nexus.

“What we’ve seen is that it seems to be easier and more tempting for students to collaborate during exams or on projects than when they are in person,” she continued.

Academic dishonesty takes on a variety of forms when students aren’t testing in a traditional classroom setting. GroupMe messaging groups meant to help students study together may easily become a forum for sharing test questions and answers. Homework help websites, like Chegg, were used by students to answer homework prior to remote learning, but now entire exams may be published on its website and made quickly accessible for online tests.

Perkin said that students collaborating during exams and accessing “study websites” like Chegg are the most common occurrences of academic misconduct.

For online tests held over GauchoSpace, students may be able to move from one tab to another to access notes and other materials, but in some cases, professors and TAs can see just how many times students are clicking between GauchoSpace and other tabs as well as how long it takes them to complete assignments, leading to a series of academic dishonesty cases if the tests and assignments were closed-note assessments.

Student Advocate General Sarah Danielzadeh said that at the end of Fall Quarter 2020, the Office of the Student Advocate saw a surge in academic dishonesty cases, mainly from S.T.E.M. classes, centering around that quarter’s midterms.

After students emailed their professors asking for more information about their cheating accusations, professors sent screenshots of the times they accessed the midterm and the times they were on GauchoSpace, Danielzadeh said.

Most of these cases were resolved between students and their professors, Danielzadeh said, and many of the students involved told the Office of the Student Advocate and their professor that they had a tab open on GauchoSpace while taking the test, but that they weren’t actually opening the site during the exam.

“When you’re in person and you get caught cheating, it’s in an in-person setting, like the professor sees that you’re cheating, whether you’re looking at another test or on your phone, or whatever that might look like,” Danielzadeh said.

“What constitutes cheating looks a lot different. I think a lot of the time, there are really blurred lines in what students consider cheating or not because they’re remote. So just within the cases that I’ve seen, a lot of students aren’t even quite sure if they can use online tools, because a lot of students are assuming that because of the remote nature of courses that it’s kind of ‘open book,’ or everything is fair game.”

“[Instructors] are dealing with the many personal and professional impacts of remote instruction and COVID-19, as are their students,” Becerra said. “Professors and TAs invest a great deal of time organizing their courses. Having to deal with academic dishonesty has a deep impact on their learning environments.”

When a professor first refers a student to the Office of Student Conduct for academic dishonesty, students receive an email that may or may not require a meeting with a Student Conduct staff member. Students who receive formal charges from the office have the choice of either accepting the sanctions or requesting a hearing to present their case.

The hearing process finds students to be either responsible or not responsible for academic dishonesty. If found responsible, students could face disciplinary probation, exclusion from activities, suspension or dismissal. From there, students may either accept the sanctions given by the Office of Student Conduct or submit an appeal.

Becerra said that when professors discover academic dishonesty, they have the option to either handle the misconduct directly or go forward with a formal investigation through the Office of Student Conduct that could result in charges and sanctioning. If students have already received a Letter of Admonishment from the Office of Student Conduct in the past, then the academic dishonesty case mandates a formal investigation. Becerra said that in the majority of instances, professors choose to move forward with a Letter of Admonishment, which lists a student’s offenses, rather than having an investigation.

Danielzadeh attributed the rise in academic dishonesty cases to “a lack of communication between professors, departments and students” during remote education. In particular, freshmen and new transfer students are at risk, Danielzadeh said, because they have less connection to the campus and have little one-on-one access to professors compared to an in-person educational setting.

“It’s worth noting that the mental challenges students are going through are very difficult because students are expected to sit on a computer all day and they experience Zoom fatigue,” Danielzadeh said. “[Students are] not able to perform at the same academic level as they would be if we were in-person.”