Over the past two decades, American universities have become more racially diverse. From 1996 to 2016, the percentage of undergraduate students of color in the United States increased from 29.6% to 45.2%, according to a report by the American Council on Education. 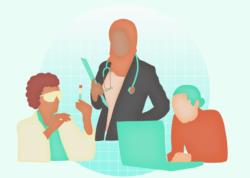 Currently, Tettegah and her collaborators have been gathering data from students as part of a broader self-assessment of UCSB’s current climate and practices. Emily Liu / Daily Nexus

Despite these gains, however, S.T.E.M. fields remain skewed, with Black and Hispanic students significantly underrepresented. Zooming in on the demographics of faculty, staff and administrators in these fields, the majority of positions are filled by white people.

There are problems with this even beyond a socioeconomic lens, Sharon Tettegah, the director of the Center for Black Studies Research (CBSR) at UC Santa Barbara and a professor in the Department of Black Studies, explained in an interview with the Nexus. Since 2018, when Tettegah first began working at UCSB, these issues have underpinned much of her work on campus.

“If you don’t have a diverse group of people involved in S.T.E.M. then you’re not going to have those voices, and innovation comes out of that diversity,” Tettegah said.

Of particular importance for Tettegah is S.T.E.M. and data science engagement with underrepresented groups on campus. Tettagah has been working alongside Kenneth Kosik and Timothy Sherwood —  the Harriman professor of neuroscience and a professor of computer science at UCSB, respectively — to bring in more people from historically underrepresented groups to data science and S.T.E.M. fields.

Tettegah and Kosik teamed up to establish the Neuro-Computational Center, which aims to bring more Black students into the field of neurocomputation with the help of mentors from historically underrepresented groups who do work in the field.

In addition, a 2020 Award for Inclusion Research from Google AI has awarded Sherwood and Tettegah funding to create a pipeline for collaboration between the CBSR and the Department of Computer Science.

“Data science is everywhere. And a lot of times people don’t think about computational data science beyond just S.T.E.M., but literally, people are grappling with it in probably any field or discipline of study. It’s really a thing that is at the convergence of everything,” Tettegah said.

“There’s all these initiatives on data science on campus. But there had not been a focus specifically on underrepresented groups.”

In the future, a goal of Tettegah and her collaborators is to place an emphasis on first-year students in particular and get them involved in data science as part of the broader push to get historically underrepresented groups into S.T.E.M.

Tettegah also currently co-leads Aspire: The National Alliance for Inclusive & Diverse S.T.E.M. Faculty at UCSB alongside Vice Chancellor for Diversity, Equity and Inclusion Belinda Robnett. Aspire is an initiative led by the Association of Public and Land-grant Universities to diversify S.T.E.M. faculty on campus and cultivate a more inclusive climate among the various S.T.E.M. departments at UCSB. UCSB is part of a cohort of 19 universities involved with Aspire.

“It’s focused on faculty, which eventually trickles down to students because if you have diverse faculty, it’s more likely you’re going to attract diverse students …  the whole goal is to increase and retain diverse faculty,” Tettegah said.

In addition to drawing in people from underrepresented groups through outreach, Tettegah has also been engaged in an investigation into how teaching methods may be causing a demographic skew in S.T.E.M. fields, particularly engineering.

“I think it may have something to do with this kind of epistemology — how you come to know things,” Tettegah said.

“When you look at how universities are training and educating students in S.T.E.M., you have a very, very, as far as I’m concerned, outdated approach to teaching and learning.”

Tettegah’s latest project — a component of Aspire — takes aim at current approaches to teaching and learning in the university setting, attempting to better understand “user preferences” in engineering education: what best engages students and helps them retain information in the context of the mediums and methods used to teach class curriculums.

Currently, Tettegah and her collaborators have been gathering data from students as part of a broader self-assessment of UCSB’s current climate and practices.

Through this, she is hoping to help educators in engineering — and  S.T.E.M. more broadly — in their quest to diversify content and go beyond traditional means of teaching which may not be as accessible to students.

“If you’re in a course, do you have a preference for individual content that’s just equations only? Or do you like images, or do you like to see simulations of these things?” Tettegah said.

All of these initiatives — if they lead to the change Tettegah is hoping they’ll lead to — could amount to a paradigm shift.

“It’s a different approach, and we’ve never collected this kind of data before. Never collected data around user preferences. It’s not even been done at the K-12 level,” Tettegah said.

“Think about how you were educated and how you were taught. What opportunities were provided to you? If you had to start all over again, knowing what you know now, what would your education look like? What would the teaching and learning look like for you?”