The Daily Nexus
The Daily Stench
Sad! Donald Trump Has Said “I Love You” to Domestic Terrorists More Than to Own Children
January 15, 2021 at 4:20 pm by Valerie Fu 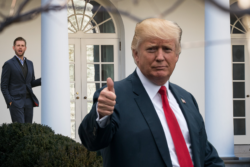 Love from one’s father is an elusive pot of gold craved by most and even achieved by a lucky few! However, for Trump progeny Donald Jr., Eric, Ivanka, Tiffany, and Barron, the pot of gold in question looks more like a tupperware container filled with $0.52 worth of dirty change.

In response to the alt-right coup attempt on Jan. 6 that left the Capitol Building in tatters, Donald Trump, with all the warmth of Mother Teresa and the compassion of St. Francis of Assisi, addressed the furious rioters on Twitter: “Go home, we love you. You’re very special.” Likely one of the only times the Trump children have ever witnessed their father using the L-word so brazenly and yet so tenderly, it is almost certain that at least one of them (probably Eric) burst into tears on the spot. The neglected Trump children, though able to bask in the grossly privileged glow of being the offspring of a fascist dictator, are apparently unable to bask in the warm glow of a father’s love.

Regarding his father’s incendiary remarks, a tearful Eric Trump said, “For as long as I remember, my father has been iron-lipped when it came to any affection between him and his sons.” After blowing his nose loudly into a MAGA handkerchief, he continued, “But I think if I piece together everything I’ve heard him say to me in the past 20 years, I could make a Youtube cut compilation of him saying the words, ‘I’, ‘Love’, ‘You’, and ‘Eric’ all together.” When asked if Donald Trump had ever said those four words to him in the same breath, Eric Trump burst into tears again and refused to continue with the interview.

In response to whether her father has verbally or physically expressed his love for his children, Ivanka Trump, the clear favorite child of Donald Trump, said, “Yes, of course Dad has told me that he loves me. Once I took a recording of him saying it and sold the tape to my siblings so that they could pretend that he was saying it to them too.”

She smiles, “Whoever said that you can’t buy happiness hasn’t been able to package fatherly love in a handy dandy cassette. I even released it on vinyl so that Donald Jr. could play it over and over again on his turntable like a Billy Joel record.”

Valerie Fu is glad her own father does the bare minimum by not professing love to neo-Nazis.