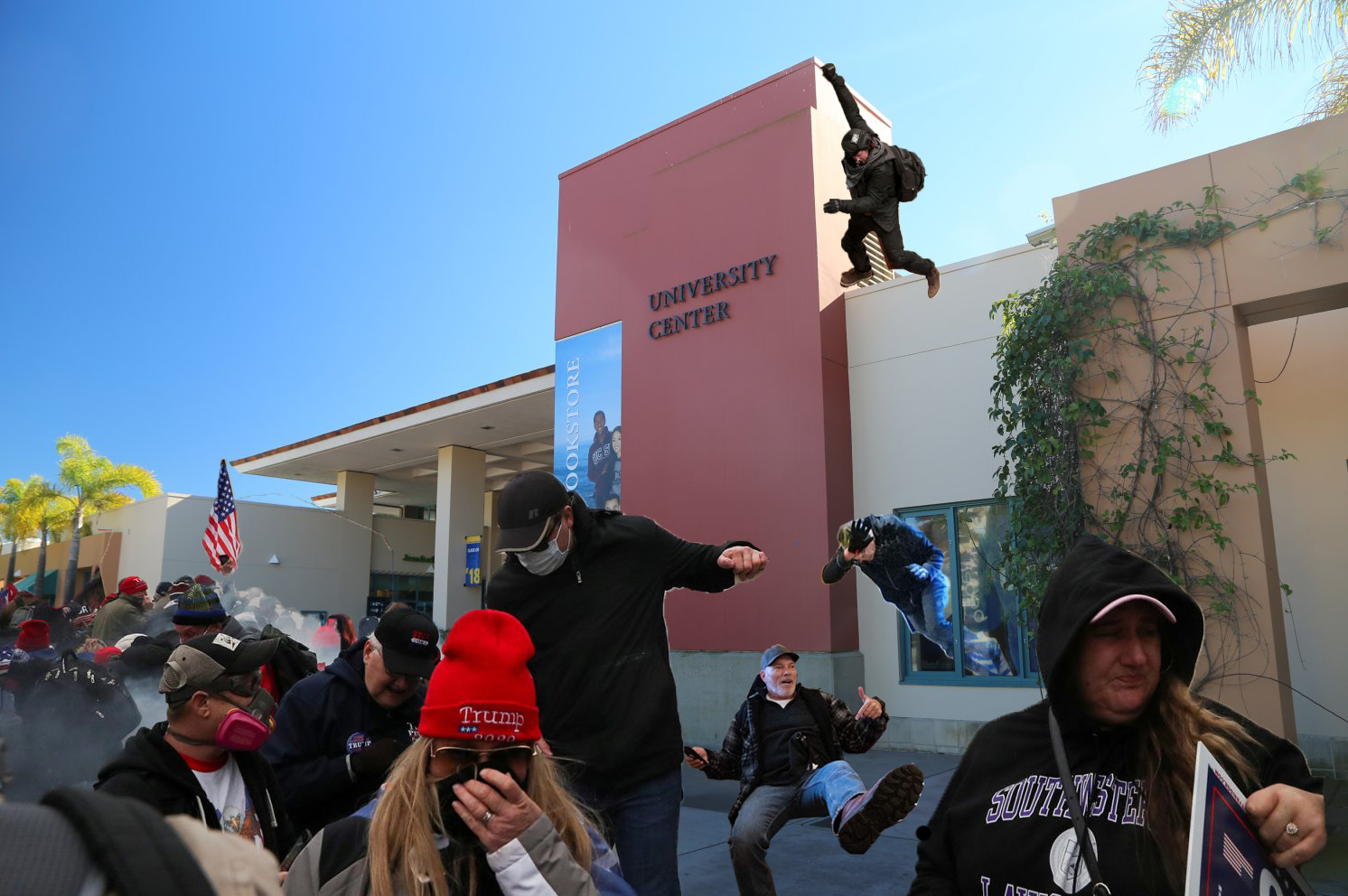 Rallied by the battle cries of right-wing radicals who invaded the U.S. Capitol in an attempt to halt the verification of the 2020 presidential election, hundreds of UCSB’s confused Campus Republicans have stormed the University Center in their own act of minor-league sedition. The UCPD rushed to the scene Wednesday shortly after calls came in reporting the siege of the University Center and attached food court. Hoping to impinge upon the U.S. election process in an act of political protest, the UCen interlopers fortunately settled for a coup de Subway.

Unhappy with the results of an election they believe to be plagued by fraud (a myth conveniently proliferated by the election’s loser), these conservative dissidents have failed to accept the results of the latest U.S. presidential election and, in response — rather than reevaluate their political ideologies to put their efforts toward lessening human suffering — have decided to go fuck around in the student store or some shit.

“Where is Pelosi’s office?” one confused rioter asked as he entered the A.S. Food Bank and stumbled through several rows of canned goods. Another right-wing agitator was spotted ransacking the Panda Express. When reporters inquired as to what he was doing, he said he was “LOOKING FOR THOSE LOST BALLOTS, BROTHER!” Despite presumably never finding these supposed missing ballots, he did emerge with handfuls of fortune cookie slips some minutes later. “Look! This one says, ‘Your food poisoning is from another restaurant.’ That’s definitely a vote for Trump.”

Eventually, all these violent protestors were leisurely rounded up from within the UCen and stuffed in the drunk tank of the I.V. Foot Patrol office. After officials appraised the wreckage within the UCen, it seems that most of the damage was to the rioters’ pride.

After all was said and done, this reporter couldn’t help but notice that these proud boys weren’t looking too proud after this one.

A. Wiessass must ask: You threw a coup for who? Really?

Congratulations – I hadn’t read anything this unfunny in a while. It’s a good thing you’re going for a degree because a stand-up comedian career is not a viable path for you.

This is a school paper? I’ve seen comment sections with better writing. This piece does not represent the writing ability or temperament of an average UC student, much less one chosen to write in the university paper. Laced with profanities, crude and unverifiable anecdotes, and lacking a pointed message, this piece is as hot-headed a rant as the people the author mocks. Satire has been done with sophistication by people whose works UC studies and artfully provokes thought and reflection to the reader often with great wit. This is not satire.

Coup de takeout would be pretty good. It’s a pretty good piece guys, but a little unrealistic that the police would arrest them

Yes, let’s mock a good chunk of the students in our community for their beliefs because they’re in the minority. That’s sure to build a sense of community and not ostracize them.

Right, cause Campus Republicans try so hard to build community with other people………

Some of the confused Republicans commenting on this thread

Be careful Wiessass, they might table EXTRA HARD this quarter in the arbor

Though I graduated in 1967 I can see that the gift of sarcasm has not left UCSB. Another constant of the Universe still intact.

Great Satire! Republicans gotta admit their party’s a bit screwed up. Arnold Schwarzenegger admitted members of his party are an embarrassment in a very moving video Sunday.

They are Militant Seperatists, not rioters, not protesters. By identifiinh with potential terrorist orgabizations these students have condemned themselves. As a Veteran I am shocked and disgusted by some of the comments below: supporting the Seperatists and chastising the Anonymous author of this news article. We live in a free democracy under the rule of law, with guarunteed freedoms such as free speech and press. I think it is prudent to moderate the comment section for this article, lest the Militant Seperatists strom the comments section as well. We must draw a line in the sand over these issues. Protesting… Read more »