The Daily Nexus
Nexustentialism
It's satire, stupid.
Finally! F.T. To Be Replaced With North and South Subways
January 3, 2021 at 4:20 pm by Natalie Kothergirls 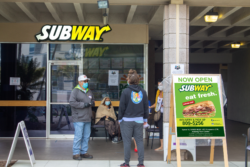 With all those pesky freshmen gone, UCSB has made the landmark announcement of their newest innovative infrastructural frontier. No, not another engineering building — much to the dismay of every humanities student — but a facility (or two) that every UCSB student can get behind: the remodeling of the Fuck Towers themselves to become North and South Subway.

“We are so excited about these sub-par subs,” said Jared, that guy you remember who’s affiliated with Subway for some reason you forgot. Chancellor Henry T. Yang himself expressed copious amounts of excitement over the new development, unable to contain a squeal as he said, “I can’t wait to absolutely shlop down yet another $5 footlong.”

Now, the University of California, Santa Barbara, the No. 6 public university in the United States of America according to the 2021 U.S. News & World Report, can finally get back to the root of one of its essential core missions: spreading the gospel and mission statement of Subway.

Given UCSB’s indifference toward whether or not their students are housed, especially in these normal and stable times, not many were shocked at the decision to replace UCSB’s largest dorm with two giant Subway restaurants. However, when questioned as to “what the hell they’re gonna do with all those shitty little beds,” Jared shrugged and gestured to a ceiling-high pile of loaves of white bread in the corner of his room. What he meant by this gesture is still unclear. Following his reference, a few loaves fell to the floor as if summoned forward.

The FDA was unavailable for comment on the shit-bed bread pile.

“You know, I was really thinking we needed another Subway!” said one of the hundreds of students in line at Panda Express. “The one in I.V. scares me a little, so I’m afraid to go in.” When asked about the on-campus Subway location, the same student responded, “No, no — Subway is the fetus. The Arbor is the womb.” The student then refused to elaborate, at which point our Nexustentialism field reporter realized that the student had yet to blink throughout the entire interview.

In addition to the redesign of the Towers of Fuck, Portola Dining Commons will also be renovated into Portola Subway, which will house several full-sized subway restaurants in different corners of the original building. The FT swimming pool will be converted into one giant vat of mayonnaise and other condiments. The condiments will not be separated with barriers.

Plastic cutlery will be provided free of charge. Cookies are also planned.