The Daily Nexus
Taste of Home
A Festive Filipino Feast
December 27, 2020 at 4:12 pm by Carrieanne Mamba

Christmas is undoubtedly a big holiday for many Americans, but for Filipino-Americans especially, Christmas is something we’ve been looking forward to since the -ber months. Many Filipinos start decorating their homes in preparation for Christmas starting in September, and it is not uncommon for the festivities to go through December and into the new year. The emphasis placed on this holiday brings the Christmas spirit into many elements: decorations, gift-giving, and of course, the food. Given its geographic location in Southeast Asia and its history of Spanish colonization, the Philippines has a unique cuisine that draws from different cultures. For my family’s Christmas feast, we typically prepare foods with Chinese, Spanish, and distinctly Filipino roots. 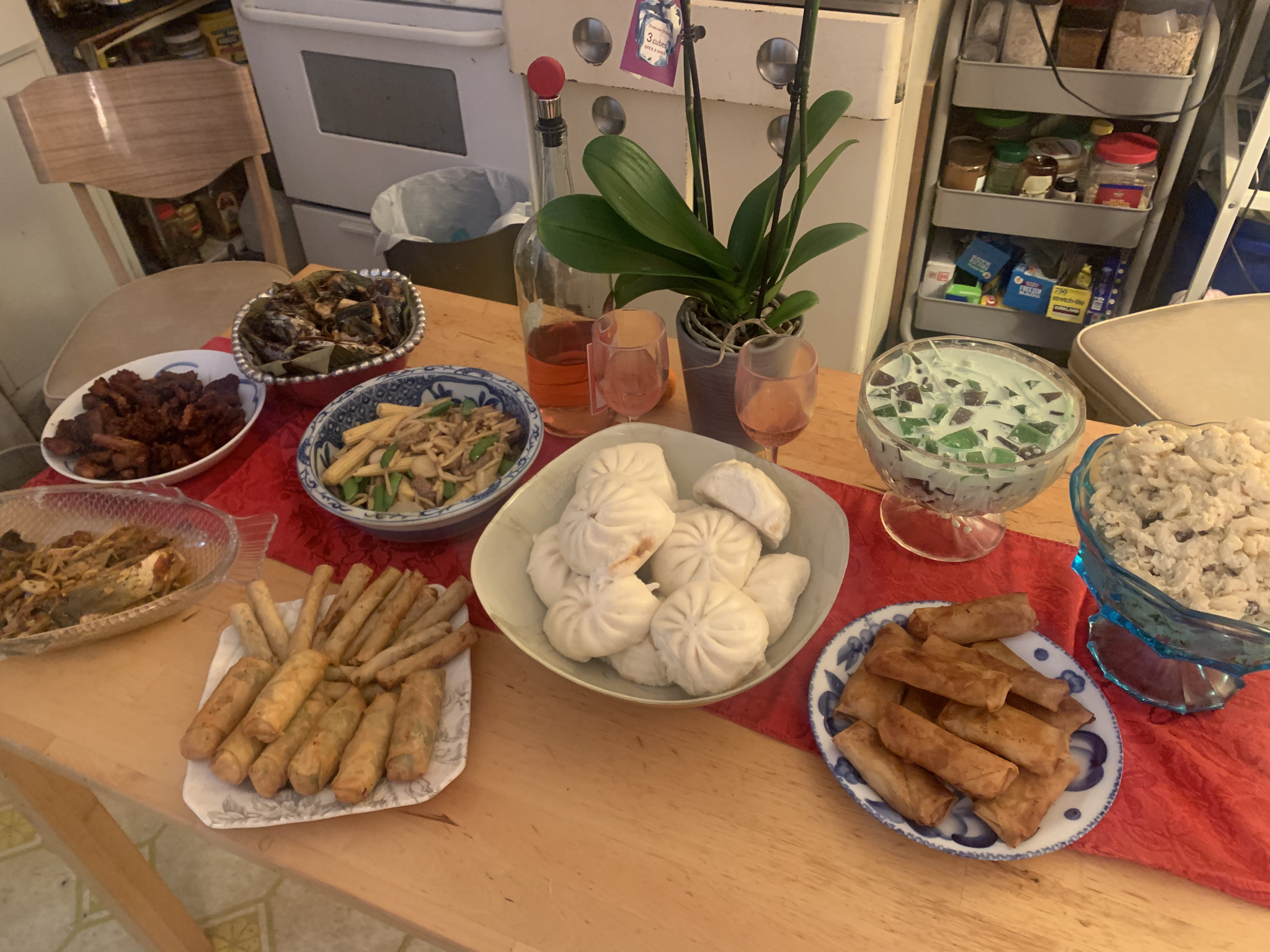 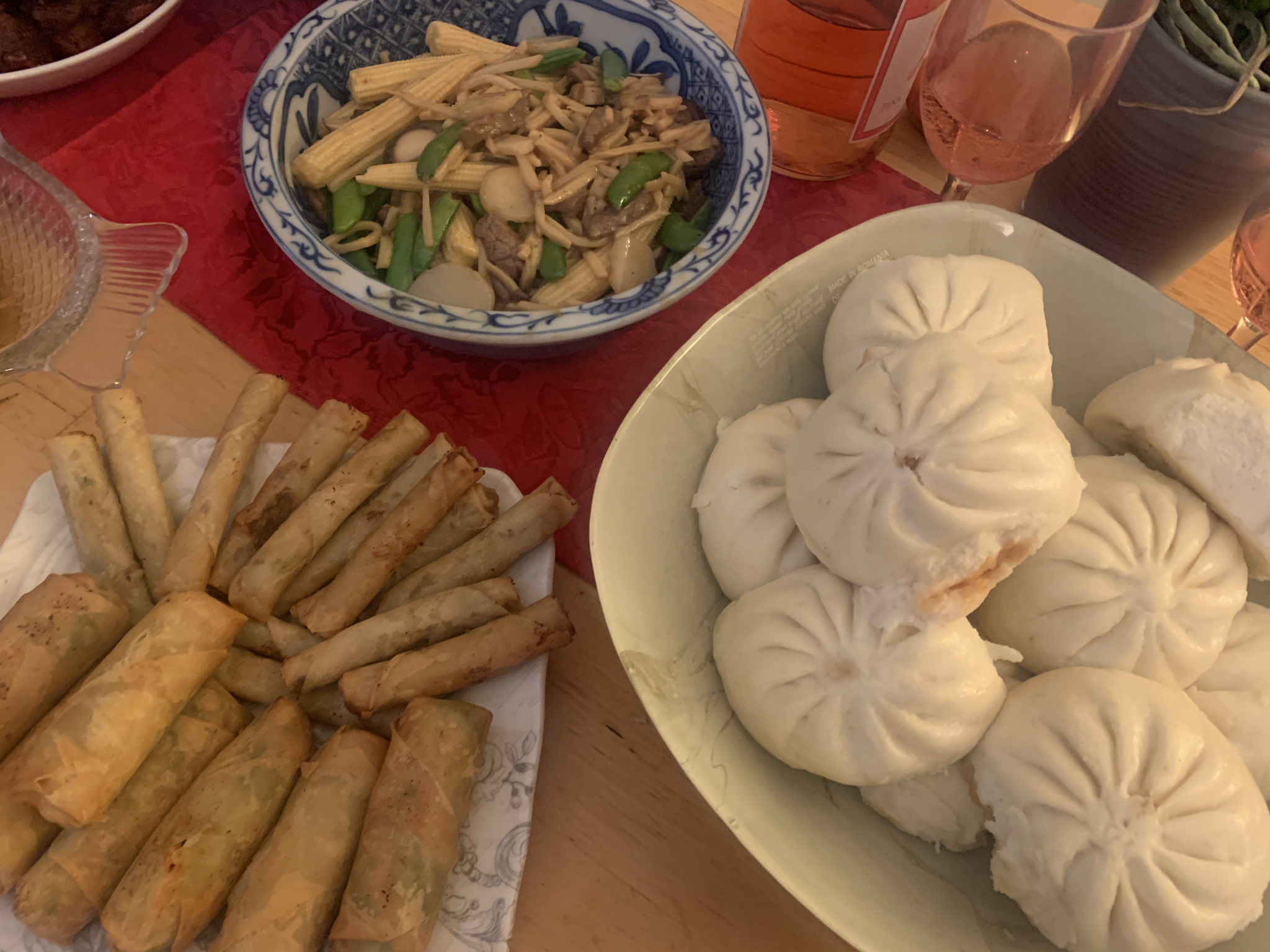 If you have ever had American Chinese food, you are probably familiar with the egg roll. It is typically filled with cabbage, carrots, and pork, all wrapped in a thick wheat wrapper. We have egg rolls on most Filipino occasions in addition to its cousin, lumpiang shanghai. Thinner than the egg roll, lumpiang shanghai was brought to the Philippines by Chinese migrants and emphasizes more of a ground meat mixture, which is why I like it better! Both fried rolls are often paired with spiced vinegar (suka), or sweet and sour chili sauce depending on your taste preferences.

Siopao also has Chinese origins. The steamed bun is the Filipinoized version of China’s cha siu bao. Siopao features a fluffy flour bun with sweet pork filling inside. I have never made them myself because the dough is a hassle to make, but my Ninang Lina is elite at making siopao. Her version features little hard-boiled egg pieces, so any leftover buns are perfect for handheld breakfasts the next morning. 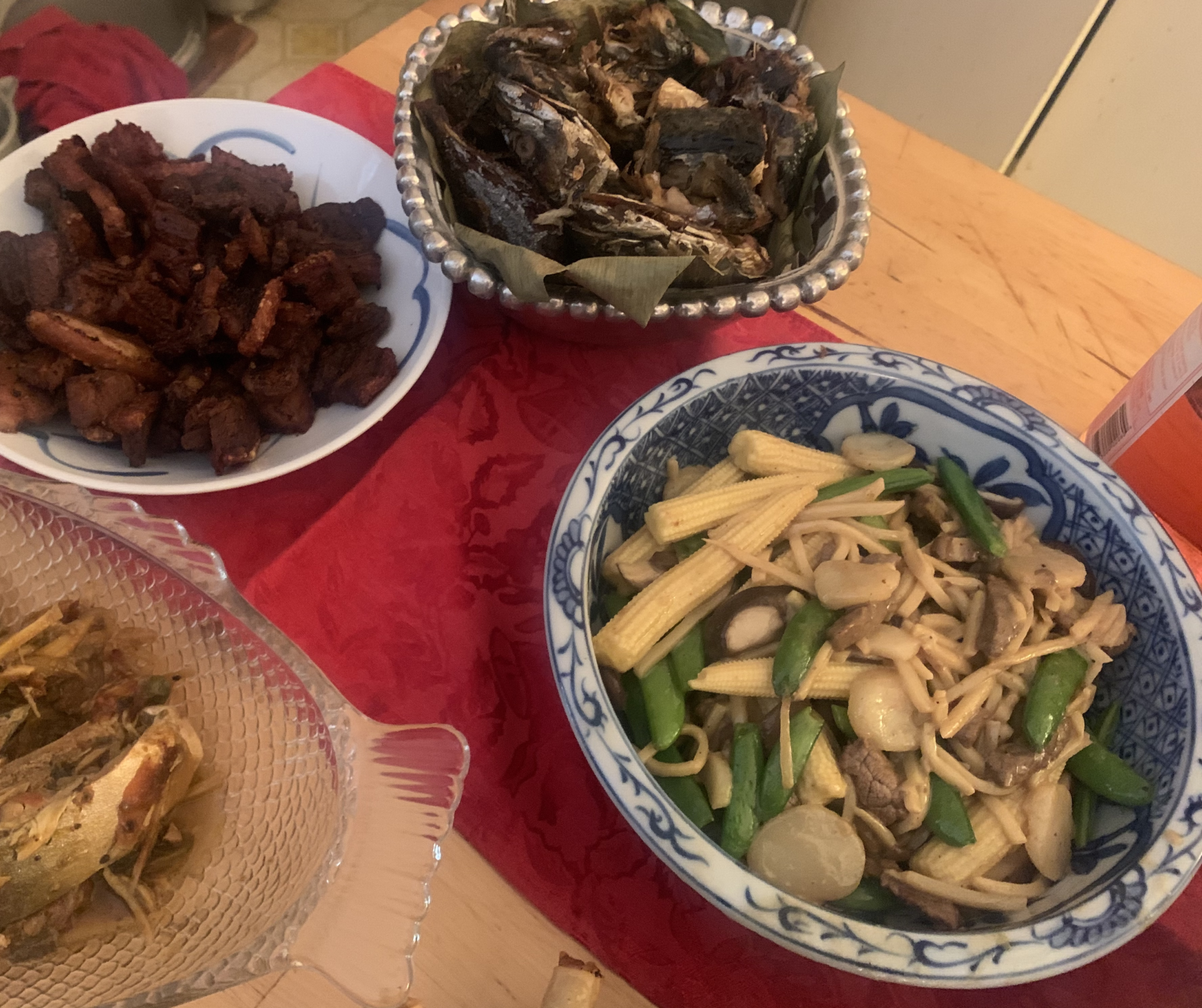 Moving on to the main course, arroz caldo directly translates to “rice soup,” and is a porridge-like dish that often involves chicken. Though it bears a Spanish name, the dish is reminiscent of congee because it came from Chinese migrants. Arroz caldo (lugaw in some parts of the country) is a comfort food known for using heavy amounts of ginger, sometimes too much, and is topped with scallions and toasted garlic. If you’re lucky, your portion will come with half a hard boiled egg. If you’re unlucky, you will bite into a zesty piece of ginger thinking that it is chicken and feel instant regret. Proceed with caution.

Filipino cuisine is very meat-heavy. During a regular year when families are able to gather, a popular entrée would be an entire roast pig or lechon. Given the pandemic, we have had to downsize a lot of typical Christmas elements. Instead of lechon this year, which can feed fifty to a hundred people, we are having pork belly to feed our family of three. Pork belly is not inherently Filipino, but it does showcase the changes we are having to make given the COVID-19 situation. 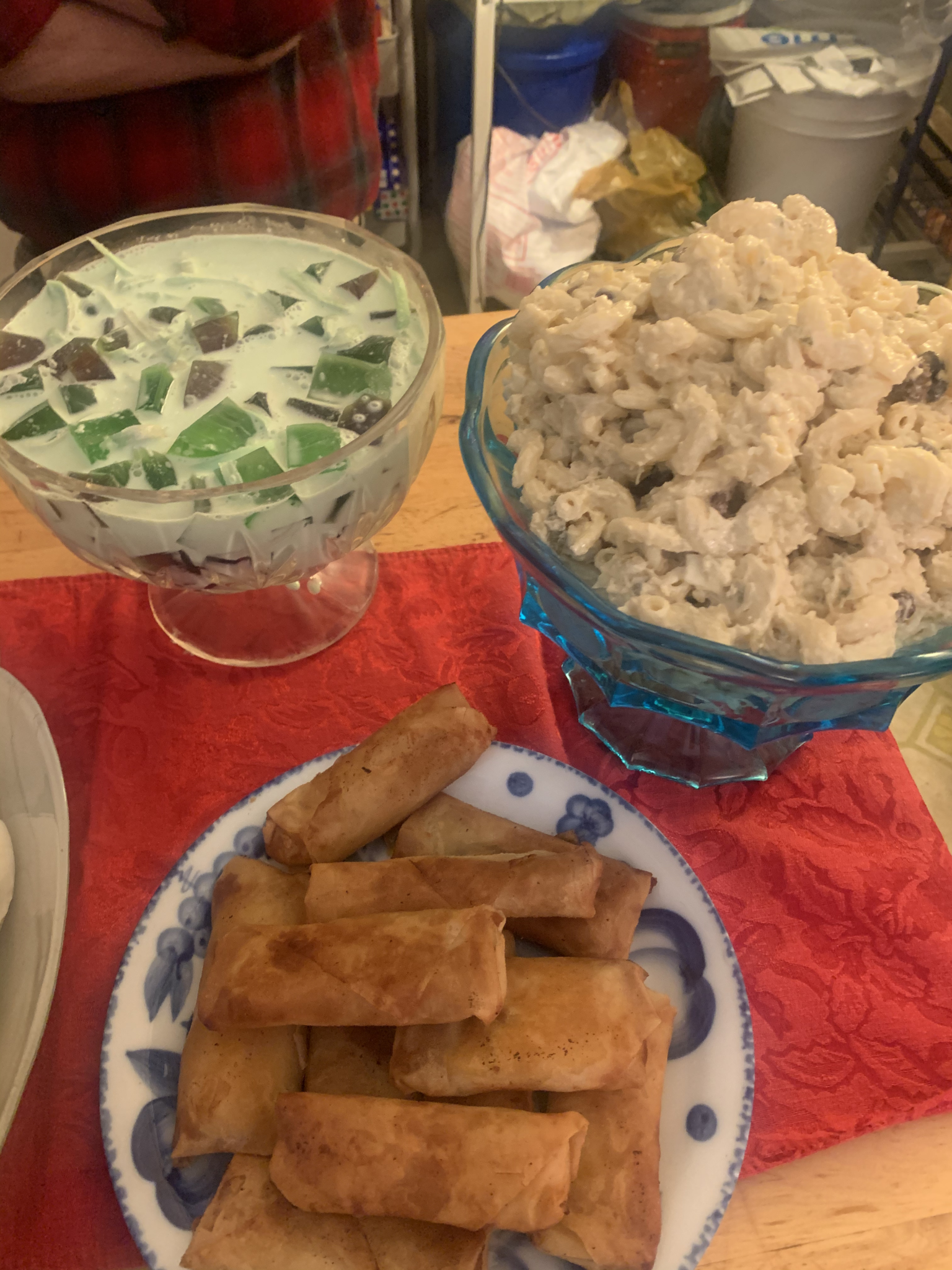 Lastly, we obviously have sweet treats to finish off our Christmas feast. Christmas Eve, or Nochebuena to Christianized Filipinos, is commemorated by a feast after mass as the event that brings in the holiday. A typical Nochebuena dessert is Filipino fruit salad. Every family has their own version of the salad with different ingredients, but for the most part, Filipino fruit salad consists of a fruit cocktail and young shredded coconut in condensed milk. I have a love-hate relationship with the dessert because some of the ingredients are good, but others in my opinion, should not be there at all. (Please! No more cheese cubes! Why are they in there?).

Buko pandan is a type of fruit salad that is made of slivers of young coconut, pandan jelly, and condensed milk. Its green color comes from pandan, which has a sweet, aromatic, and almost floral-like flavor. If there is more liquid, you can drink the dessert. If there is more green pandan jellies and coconut strips, it can be eaten with a spoon.

Unlike the fruit salad and buko pandan which most Filipinos are familiar with, sinabalu is a local dessert that comes from my parents’ hometown, Cagayan Valley, in the northernmost region of the Philippines. It is glutinous rice and coconut milk wrapped inside banana leaves and put inside bamboo tubes to cook slowly on low heat. The result is essentially a rice cake that is mild in flavor and paired with coffee or hot chocolate to end the night.

Despite being 8,000 miles away from her country of origin, my mother makes it a point to bring the Christmas she knew and grew up with to America so that I may also partake in the traditions of home. Some things are not the same because we do not have the same resources and ingredients, but we do our best to evoke a Christmas spirit that celebrates our culture and our food.

Carrieanne Mamba is a first-generation college student and second-generation Filipina American who is respectfully asking all titos and titas to stop putting so much ginger in their dishes.