The Daily Nexus
Opinion
Argument in the Office: Culture and Race in the Media — Represented or Stereotyped?
December 16, 2020 at 9:00 am by Reena Khanna and Carrieanne Mamba

The Complexities of Media Representation

As an Indian growing up in the United States, I was constantly looking for peers who could relate to my experiences. Unfortunately, the school I attended lacked diversity in terms of culture and ethnicity, so it wasn’t a place where I felt I could find that close-knit community.

As kids, we all watched cartoons and other television shows which greatly influenced our perceptions of the world surrounding us, both then and now. I remember wondering how my peers would perceive and internalize a character like Barbie if she was a person of color. I felt that a big part of the reason I wasn’t as accepted or included at school was because of the lack of exposure through the media and shows that impressionable young kids watch. Kids tend to behave like the characters in the shows they watch and internalize their mannerisms, so the problem felt rooted in the way the media was portraying and representing people of color.

When the TV show “Phineas and Ferb” first became popular, every kid was watching it or at least knew about it. Back then, the characters and the show itself were never criticized, but as time went on, this changed. Recently, people have been discussing the level of stereotypes and borderline racism this show portrayed through the character of Baljeet. This shocked me because I never remembered feeling that way. Personally, I used shows with any kind of cultural or ethnic representation as a form of escapism and as an outlet for what I wasn’t receiving in reality.

Due to the fact that kids are impressionable, I believe it’s important for them to see themselves represented in the media to prevent internalized self-hatred due to cultural or ethnic differences. Speaking from personal experience, it’s painful to go through a period of your life where you wish you were white because of the norms and values the media has taught you and your peers to believe. American Girl dolls can produce all the colors of the rainbow for their dolls, but if young colored girls are still opting for the white doll with the blonde hair and blue eyes, the media has failed them.

When I was younger, I think all I cared about was being reassured that I wasn’t some kind of “alien,” so I didn’t recognize the stereotypes in the media like I might do today. That being said, there’s also an aspect of progression: The idea of going from absolutely no representation to a little with certain stereotypes mixed in. Don’t get me wrong, no one likes to see their culture or ethnicity being stereotyped in the media, but I’ve come to learn that there’s a fine line between stereotyping and recognition in American media and television.

Because this beauty standard culture is so deeply embedded in so many Americans, it’s difficult to reverse or eliminate it. No matter how much the media portrays diversity in the 21st century, everything produced will be compared to the portrayal of its white counterpart. For this reason, any angle of representation is open to criticism and can be problematic for some.

This creates a dilemma — some of those who share this content with the intent of spreading awareness and teaching others haven’t exactly experienced any kind of “exclusion” from the media. The complexity of this idea of experience is prevalent through controversial questions: Are these people taking a voice away from those who have been through this experience? Are they deciding how people who are affected by media representation and portrayal should feel? This is where the aspect of subjectivity can become very controversial among different groups.

For the most part, we can probably agree that we would all like to see our cultures, ethnicities and religions being represented for what they are and not a bigoted or biased version. That being said, representation and portrayal are very delicate and controversial matters; any form of representation or portrayal can be problematic for one reason or another. So next time you watch a show, whether it’s as politically incorrect as “South Park” or as rigid as “The Crown,” I urge you to reflect on the characters and the commentary and recognize its beneficial aspects, but also its issues with representation and its degree of accuracy.

Reena Khanna encourages you to watch television shows and movies through a critical lens to recognize the importance of seeing yourself represented in the media. 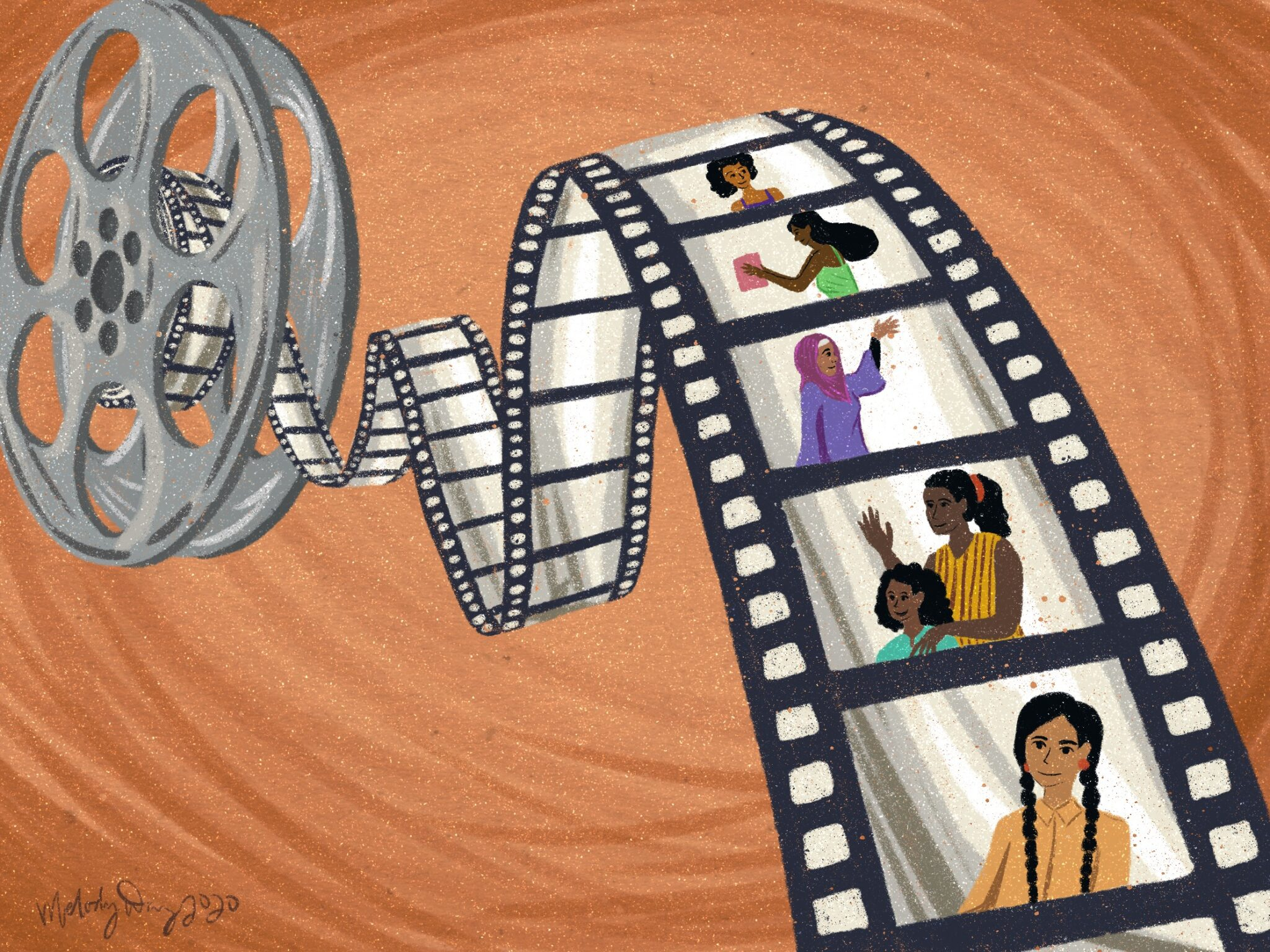 The Importance of Re-Presentation

As a Filipina woman, especially one with the rather uncommon combination of darker skin and smaller eyes, I have rarely seen myself represented in mainstream media. Filipinas who are widely known in the public eye include actress Vanessa Hudgens, singer Nicole Scherzinger and Miss Universes 2015 and 2018, Pia Wurtzbach and Catriona Gray, respectively. While many in my Filipinx community have lauded these women as I have, I cannot help but notice one particular thing they have in common: They are all of mixed race.

I am aware of the injury that can arise from the lack of acknowledgement given to mixed-race people as fully fledged members of the racial groups they inhabit. The conversation regarding “not being x enough” is one that persists in many ethnic communities, including my own.

However, this isn’t about that. This is about the message that is sent across when only fairer-skinned Filipinas are the ones able to star in feature films, grace the front covers of magazines and be worthy enough to be crowned “Miss Universe.” What is being implicitly said to young people with my complexion about their ability to be seen as beautiful or successful when they are not represented as such?

This conversation is rooted in a much deeper discussion of the history of colorism in the Philippines. The terms “morena” and “mestiza” — borrowed from the Spanish language — when put into a Filipino context, denote the hierarchy of skin tone left by Spanish colonialism. Morena referred (and still refers) to those with darker skin and was associated with being part of the lower class. By contrast, mestiza was prized — a marker that the woman who held the title was elite and “mixed” with European blood. The history of colorism in the Philippines has had an effect so great, its impact can still be felt today.

I am considered morena in the Filipinx community. This means that throughout my life I have been subject to the burning sensation of papaya soap coupled with motherly admonitions against staying outside for too long, for fear that I will get darker than I already am.

This also means that in my youth I did not understand how the other girls (the white girls) had so many options for Halloween costumes — Eurocentric Disney princess after Eurocentric Disney princess, whereas I had the eyes of Mulan, was the skin tone of Pocahontas and my mom called me Mowgli. Not to mention, I didn’t quite fit into any of the characters’ respective cultures 100 percent. I related to Mulan’s reverence for her parents, Pocahontas’ outspoken demeanor and Mowgli’s independence and wild hair.

Representation is so important to the empowerment of individuals. When you are able to see yourself in the media, whether in the faces of animated characters or real-life people, that makes you feel like you can be one of them.

But representation alone is not enough. In the rare cases where I have seen myself in TV shows and movies, they have been different versions of me as a nurse, a maid or some other menial servant relegated to the margins, meant to serve as a supporting role for the greater, better, lighter and whiter characters. I know now that I am more than a background character, but it took some time to come to that realization given our media’s emphasis on idolizing whiteness at the expense of those with darker skin.

With the establishment of movements like Asia Jackson’s #MagandangMorenx, and more representation of Asian and Pacific Islander protagonists like Moana and Raya in children’s movies, I am hoping that younger generations do not have to go through the same experiences I did. I hope they don’t have to question their self-worth because they are unable to locate themselves in mainstream media. I hope instead that more positive representation arises for people like me as time goes on, and morenx kids can find comfort and confidence in knowing that they, too, are worthy of depiction.

Carrieanne Mamba is excited to watch “Raya and the Last Dragon” and wants you to mind your business if you see her crying in the theaters when it comes out.