The Daily Nexus
Opinion
Argument in the Office: Relationships — Exclusive or Exploratory?
December 4, 2020 at 9:00 am by Reena Khanna and Geneva Bethel

Opening Your Mind to Open Relationships

Ever feel like you want the relationship but without the commitment? Open relationships provide you with the pleasure and benefits of a relationship you need and deserve but only when convenient. Relationships can be tricky, and sometimes you can feel suffocated and in need of a break. Maybe you want to experience different relationships with different people, or maybe you just want to have different sexual experiences. So why is there such a prevalent stigma about wanting to experiment with your romantic life?

Although the nitty-gritty rules vary from couple to couple, an open relationship is essentially a relationship without the aspect of exclusivity. Some may consider this as cheating or being unfaithful, but this type of relationship is a mutual decision between partners. How is this different from a friends-with-benefits situation? The emotional component of a relationship plays an important role, as well as the sexual one. You might be wondering why someone would develop an emotional connection with someone if they don’t plan on committing to them exclusively. Everyone functions differently, especially when it comes to relationships: Some may need to establish several emotional connections in order to find out what they really want in a romantic partner.

So, what are the benefits of this progressive romantic exploration?

Feeling less jealous around your significant other can also improve your communication skills with that person. When you decide to transition your relationship to an open one, a level of mutual trust is created between you and your partner. This means that both parties can comfortably share who they are seeing and having sex with, and overall how it’s going. Once you get over that barrier, you and your significant other can become more open about other things. That being said, some couples prefer to keep their other relations and partners private. This creates a different level of trust in that neither party knows everything about what the other is doing. This can really help with paranoia, anxiety and codependency in a relationship (ex: always checking each other’s phones) and create a sort of mutual privacy wall to help develop a strong foundation of trust.

Every relationship needs a balance of emotional and sexual connection. So now, let’s discuss the physical. Establishing sexual connections with different partners can allow you to explore the world of sex and find your pleasures and displeasures. Sexual exploration can allow you to better communicate to your significant other what exactly gets you there, which can enhance both your emotional and sexual chemistry. Some may feel guilty about feeling better in bed with someone other than your significant other, but strong communication skills and a foundation of trust can help prevent that feeling of guilt, especially when you are being transparent with the aim of enhancing and strengthening your bond with your partner.

Sex with the same person can become boring! Sometimes, couples need to spice up their sex lives to regain the chemistry and sexual energy between them. Trying new things and learning from other sexual partners can allow you and your significant other to restore those honeymoon-stage butterflies and explore new boundaries.

Although open relationships can really help strengthen an already existing bond between two people, it’s important to note that it’s not a quick fix and they do require effort from both partners. It is equally important to discuss the “open” part of the relationship with your partner to be on the same page about what that means for both of you. You should be prepared to be open with both yourself and your partner to avoid any miscommunications about your situation.

Open relationships are not for everyone, but they can definitely be beneficial for couples (married or not) who are looking to reignite their spark and don’t mind straying away from traditional monogamous relationships.

Reena Khanna encourages you to drop the exclusivity in your relationship and explore your emotional and sexual connections. 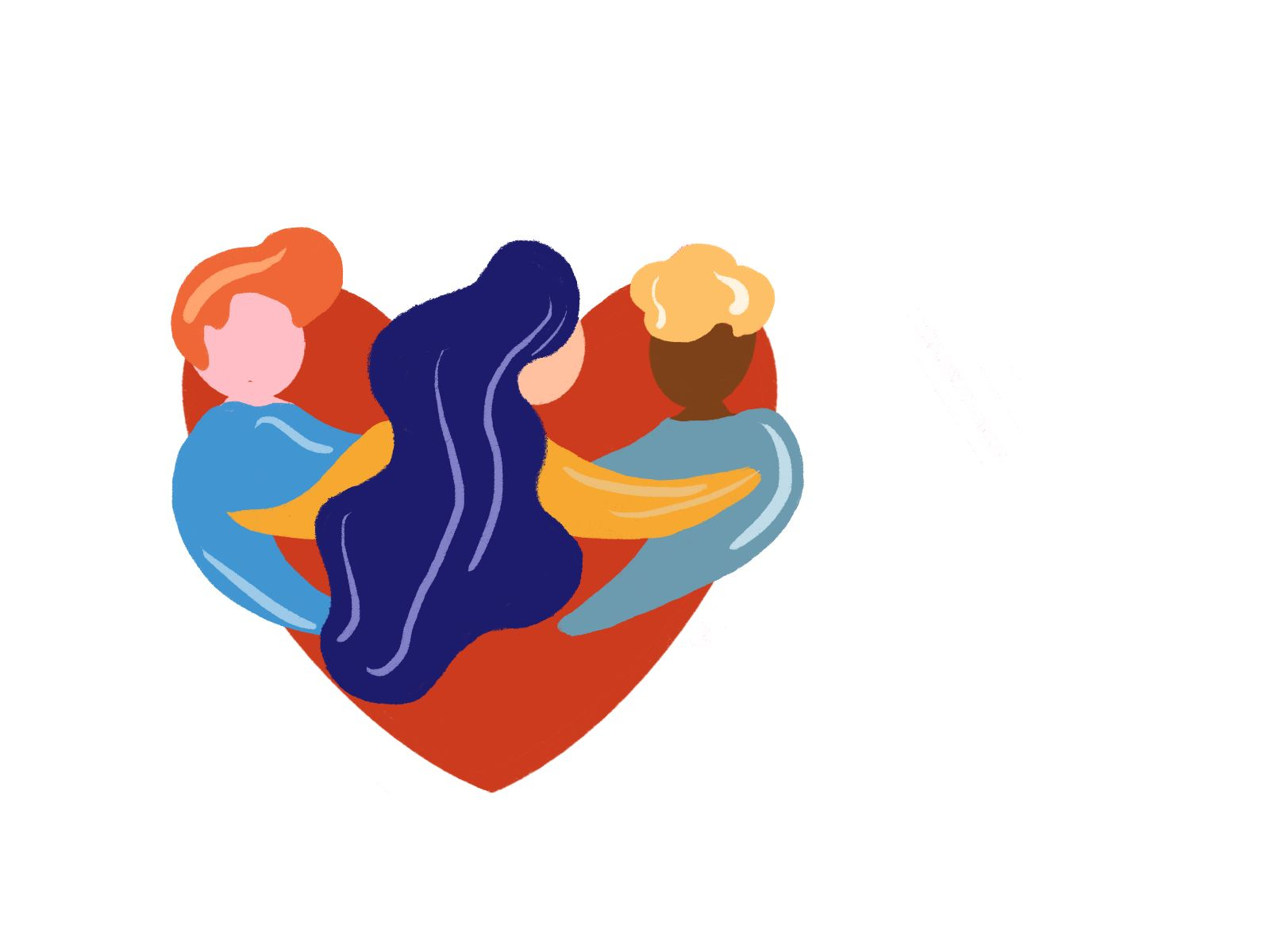 Open Relationships: The More the Scarier

One of the most basic human goals throughout time has been to love and be loved. While some people may think that open relationships will provide that kind of satisfaction, they really won’t. Instead, open relationships can cause feelings of jealousy, anxiety and low self-esteem to arise.

It’s obviously extremely easy to have many platonic relationships at the same time; the need to feel a sense of belonging has always been important to human nature. Feeling sexually attracted to many people at once is also relatively easy to experience since humans are programmed to reproduce and continue to build the population. However, it is practically impossible for anyone to be romantically in love with two people at the same time. This means that people choosing to enter open relationships likely do so to pursue sex with someone else or because they don’t really love the person in their original relationship.

A pretty significant — and toxic — reason that couples enter open relationships is as a last-ditch effort to keep the “straying” person from leaving. This is an awful reason to start an open relationship because the person who wants to leave (we’ll call them “A”) and the person who wants to stay (we’ll call them “B”) will just have even more problems. B will feel unsatisfactory compared to A’s new partner, especially considering that they needed to bring someone else into the relationship to make A feel like they had a reason to stay. Oftentimes, B won’t even engage in any kind of activity with somebody else, so it’s more of a one-sided open relationship or a relationship for cheaters and people who are afraid of being alone.

There is also the matter of possessiveness. Although it’s similar to the situation between A and B, possessiveness will play out differently when both couples actually see other people. Perhaps at the beginning of the open relationship, both partners are enjoying meeting and experimenting with new people, but a few months down the line, one partner may feel jealous of the time their significant other is spending with other people. Fights ensue, and in this instance the couple breaks up, leading them to live as single people for some time. They realize how much easier it is to hook-up with other people without worrying what your partner may think, which makes open relationships pretty inefficient.

Additionally, a Canadian study shows that only a third of participants who rated open relationships as their preferred type of relationship have ever engaged in one. Does this mean that even those who say they prefer open relationships are unwilling to put the work needed into making one?

You might be wondering, “What’s the work needed in an open relationship?” Well, open relationships are significantly more time-consuming and money-consuming than monogamous relationships. You must figure out what rules are needed in order to avoid partaking in hurtful actions, plan at least twice as many dates and buy twice as many gifts for birthdays or the holidays. Creating rules is necessary to make open relationships have a chance at working and if partners can’t clearly express their feelings, the relationship will end. Planning dates can be tough when you have to think of two fun activities to do; you’ll have to ask yourself if you want to see the same movie twice in one week, see two different movies or if you even want to see movies with both people. Spending extra money is the reason why 76.8% of people in open relationships are in the middle class or higher. Someone who is working 40-plus hours a week for a minimum-wage job is going to have very little energy to put into one relationship — let alone two — which is why the majority of the population is unable to practice polygamy with the efforts needed to make it work long term.

Fighting and conflict resolution can be a difficult problem in any relationship, both platonic and romantic. You’ve probably heard of at least one couple that broke up because they fought over a trivial matter, like how long it took for one of them to respond to a text. Open relationships can increase this stress and fighting. One of the huge reasons for fighting is when couples are not on the same page with what they want to receive in their relationship with each other versus their relationship with another person. One person may want somebody who stimulates them more emotionally and the other may want someone who stimulates them more sexually. This discrepancy between partners’ goals will once again leave them with lowered self-esteem and possibly anxiety.

If you wish to partake in an open relationship, be aware of the extra work, resources and communication needed to ensure that it can do well. Otherwise, be prepared to have a tumultuous and stressful time trying to balance everything and making sure no feelings are hurt.

Although Geneva Bethel wrote on the unhealthier aspects of open relationships, she hopes all of your relationships are healthy and make you happy.

Geneva Bethel
Geneva Bethel is an opinion writer. She is an animal lover who enjoys reading and all activities involving music — including crying to Lana Del Rey.